From about 02:10 UTC, an intensification of the explosive activity of the North crater area of ​​Stromboli was observed, with some stronger explosions such as the one recorded at 02:29 UTC. The materials produced fell abundantly in the upper part of the Sciara del Fuoco, rolling down the slope.

In conjunction with the increase in explosive activity, from 02:30 UTC, a modest overflow of lava is observed from the area of ​​the North crater which is located in the upper part of the Sciara del Fuoco.
In correspondence with the explosion at 02:29 UTC, a seismic signal lasting about 3 minutes is detected. Mount Pelee - photo © OVSM via Outremers 360 - one click to enlarge

Between September 16 and 23, 2022, the OVSM recorded at Mount Pelée at least 9 volcano-tectonic earthquakes of magnitude less than 0.1, of which 2 could be located.

This seismicity is superficial, and associated with the formation of micro-fractures of the building, located at 400m. above sea level, approximately 1 km. deep below the top surface.

In addition, 3 hybrid earthquakes were recorded, related to internal fluids. 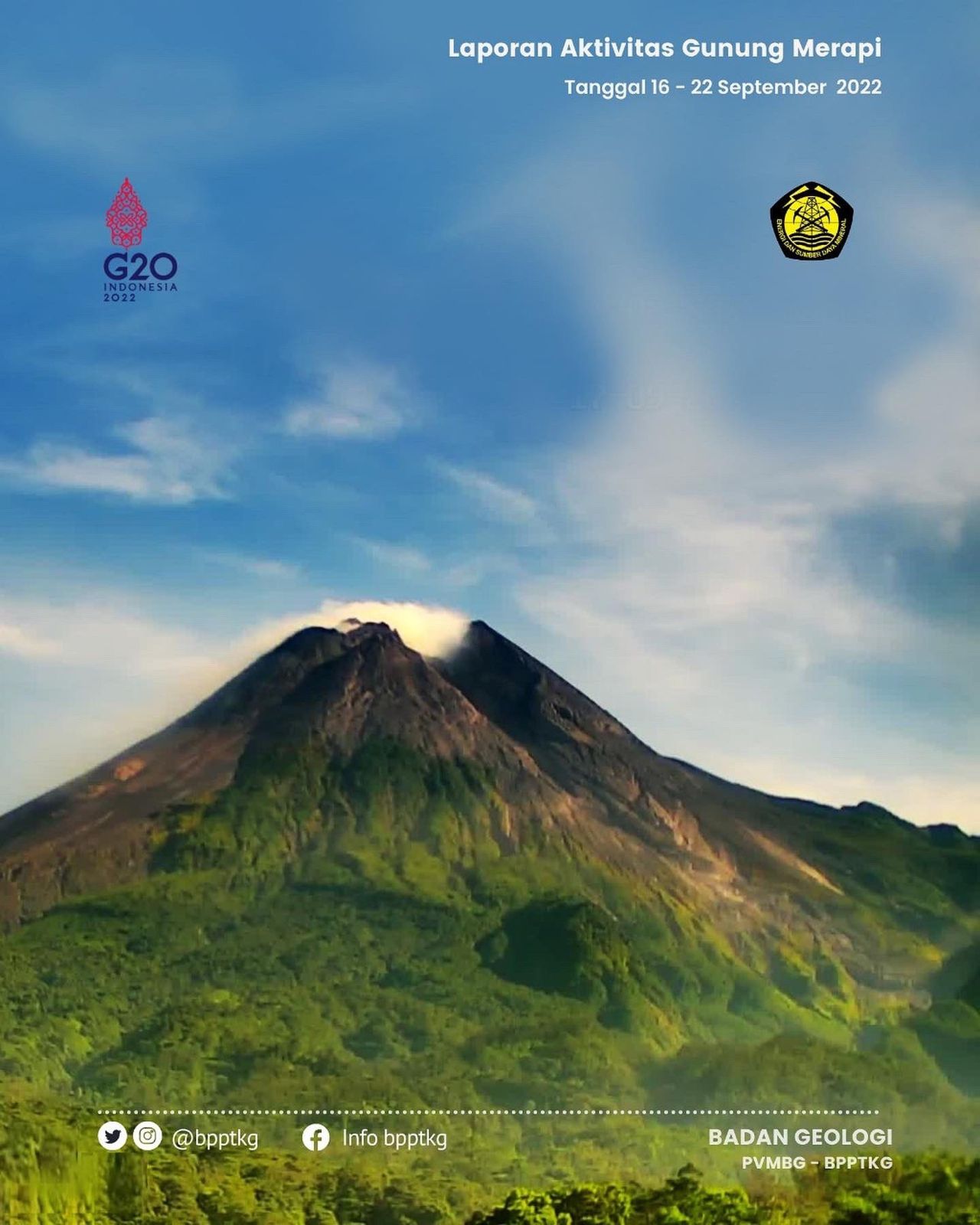 This week from September 16 to 22, 2022, 13 lava avalanches were observed southwest of Merapi, dominant up to the Bebeng River with a maximum slip distance of 1,900 m.

No significant morphological change was observed at the level of the domes. Based on photo analysis, the volume of the southwest lava dome is considered fixed at 1,624,000 m³ and the central dome is 2,772,000 m³.

During this week, the seismicity of Mount Merapi recorded

The deformation of Mount Merapi, which was monitored by EDM this week, showed a distance shortening of 0.8 cm/day. The amplitude of the eruptive tremor (indicator of a surface lava emission) has remained generally stable over the past 24 hours, at around 20% of its initial amplitude.

Following the rapid deformations of the ground on September 19 linked to the injection of magma towards the surface which showed a multi-decimetric displacement on the south-west flank of approximately 45-50 cm max., a deflation of the summit zone followed the first 3 days of the eruption. This deflation was linked to the emptying of the reservoir located under the summit to supply the eruptive site. For the past two days, GPS data have shown a relative stabilization of surface deformations.

Thanks to a clear sky since this morning on the Piton de la Fournaise, lava flow estimates have been established by satellite method on the HOTVOLC (OPGC - Clermont Auvergne University) and MIROVA (University of Turin) platforms. These estimates indicate a relatively stable average flow over the last 24 hours of between 1 and 3.5 m³/s. These flows are in line with the flows estimated from the sulfur dioxide flow data in the atmosphere recorded by the NOVAC stations of the OVPF-IPGP located on the edge of the Enclosure. These data suggest an average flow of about 1.5 m³/s over the past few days. Flow estimates indicate a total emitted volume of the order of 1.2 to 2.5 million cubic meters since the start of the eruption. This value should be considered as a minimum estimate due to the poor weather conditions in recent days which have attenuated the thermal radiation during the lava effusion peaks and which have disturbed the SO2 flux acquisitions in the atmosphere. Piton de La Fournaise - resurgences of lava are visible at the level of the lava tubes - photo OVPF 24.09.2022 - one click to enlarge

The images from the OVPF-IPGP webcam located at Piton de Bert, as well as the images of the ULM overflight of the eruptive site by a team from the OVPF-IPGP this morning, show:
- significant degassing at the eruptive site (small cone leaning against the Kalla Pélé peak) and low amplitude lava projections.
- a gas plume still directed west-southwest as is also visible on the satellite data.
- a lava flow activity taking place mainly through lava tunnels, with two flow axes: one towards the east and the other towards the southeast
- several resurgences of lava are visible at the level of the tunnels The active lava front was located this morning in the area of ​​the Château Fort crater around 2,000 m altitude. The ashes that have accumulated on the island of La Palma, following the eruption of Tajogaite, could cause additional problems with the heavy rains (the most intense episode of the last decade) that affect the Canary archipelago , under tropical storm Hermine. The population is advised to try to clear as much as possible of what is still deposited in the gutters and private drains.

Tropical Storm Hermine is causing red warnings to be issued due to very heavy rains in Gran Canaria, El Hierro and La Palma expected this Sunday.