At Piton de La Fournaise, the amplitude of the eruptive tremor (indicator of surface lava emission) has remained generally stable over the past 24 hours, at around 20% of its initial amplitude. Piton de La Fournaise - Evolution of the RSAM (indicator of a surface lava emission) since 09/19/2022 00:00 UTC time (04:00 local time) on the RVA seismological station located at the level of the Rivals crater (© OVPF/IPGP ) The lava flow estimates established by satellite method on the HOTVOLC (OPGC - Clermont Auvergne University) and MIROVA (University of Turin) platforms indicate an average flow over the last 24 hours relatively stable and low between 1 and 3 m3 / s.

The images from the OVPF-IPGP webcam located at Piton de Bert show on the morning of 09/25/2022:
- the cone resulting from the fallout of the lava projections continues its construction
- still significant degassing at the eruptive site and low-amplitude lava projections;
- a gas plume still directed west-southwest as also observed on the satellite data;
- a lava flow activity still mainly through lava tunnels as observed yesterday by infrared imagery;
- several resurgences of lava are visible at the level of the tunnels. 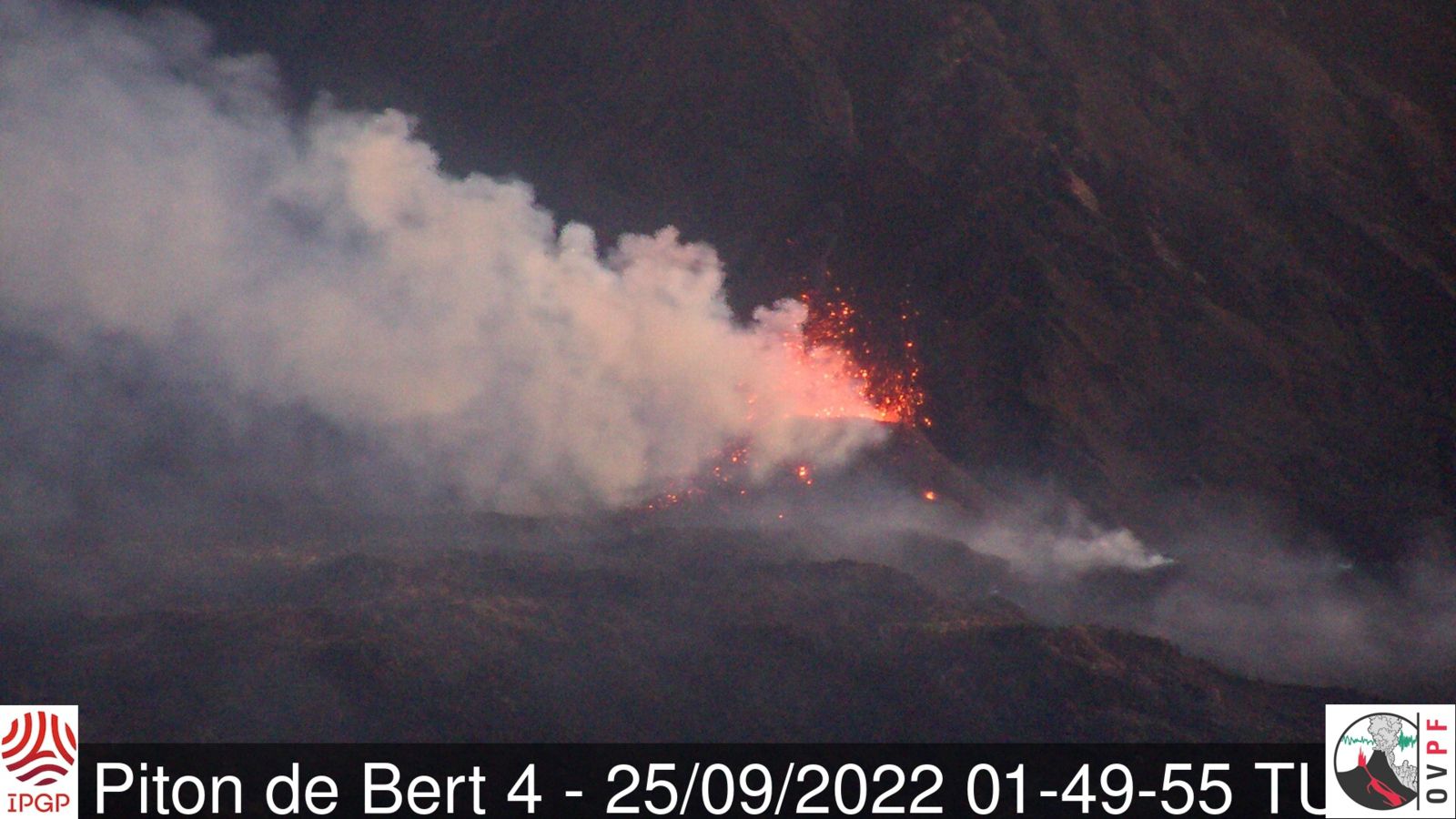 The explosive-effusive activity of Reventador remains moderate on September 24-25.

The REVS reference station for daily seismic statistics transmitted without problems during the last 24 hours: with 64 explosion earthquakes, 19 LP earthquakes, 1 episode of emission tremor, and 6 episodes of harmonic tremor.

At the end of the afternoon yesterday the volcano was clear and an emission of steam, gas and ash could be observed moving towards the northeast at more than 1000 meters above the level of the crater. The Washington VAAC issued 3 reports of ash emission 988 meters above the summit in a northeasterly, northwesterly and southwesterly direction.

The MIROVA system records 1 low thermal alert in the last 24 hours. and early in the morning the volcano cleared, the incandescence could be observed at the summit and thanks to the observations in the REBECA thermal camera, the lava flow continues to be observed on the northeast flank,

On September 25 in the morning, several ash emissions heading west at 1000 meters above sea level from the crater were observed, before the weather became cloudy. The eruption at Kīlauea Volcano's summit in Halema'uma'u Crater has continued for the past 24 hours. All recent eruptive activity has been confined to the crater.

The active part of the lava lake has remained stable over the past 24 hours. Flyby measurements from September 12, 2022 indicated that the crater floor had experienced a total elevation of about 143 meters and 111 million cubic meters of lava had been emitted since this eruption began on September 29, 2021.

Summit tiltmeters showed a minor deflationary-inflationary (DI) event over the past 24 hours. Volcanic tremor remains above background levels. A sulfur dioxide emission rate of approximately 930 tonnes per day (t/d) was measured on September 21, 2022.