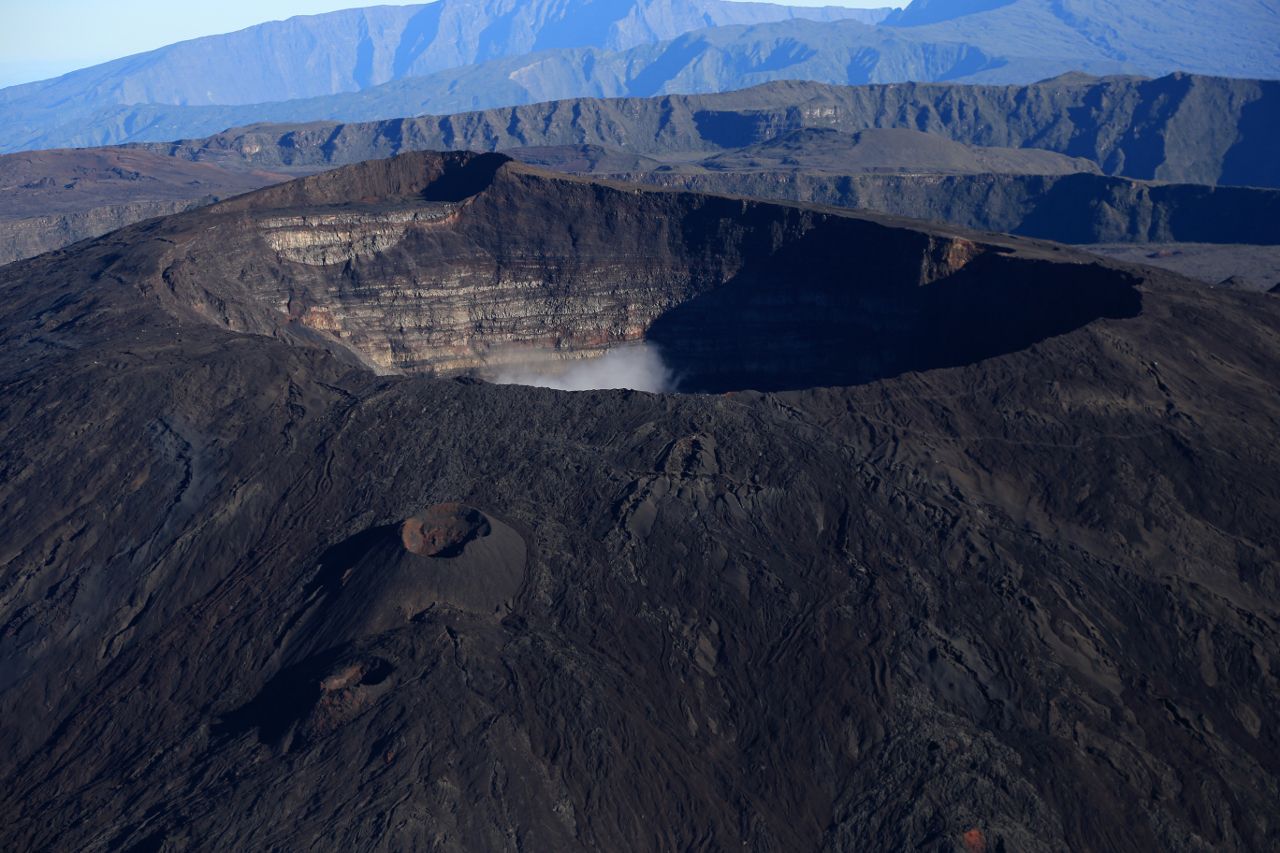 The cessation of the seismic crisis means that the progression of magma has ceased at depth (intrusion) below the summit and has not reached the surface.

Since then, seismicity has remained sustained with 2 or 3 earthquakes recorded per hour. Piton de La Fournaise -: Location map (epicentres) and northwest - southeast and southwest - northeast sections (showing the location in depth, hypocentres) of the earthquakes recorded and located by the OVPF-IPGP on September 7 under Reunion. Only localizable earthquakes have been shown on the map. The observatory records seismic events not represented on this map because they cannot be located, due to their too low magnitude - Doc. OVPF

No hypothesis is ruled out (permanent cessation of seismicity, resumption of intrusion, new intrusion) as to the evolution of the future situation given this persistent seismicity.

In the past such intrusions have sometimes preceded the final injection of magma leading to the eruption by a few days, as was recently observed in October 2019 and December 2020.

Alert level 1 is maintained. As a result, public access to the entire Piton de la Fournaise enclosure, whether from the Pas de Bellecombe trail or from any other trail, is prohibited until further notice.

The seismology of September 7 is characterized by:

- Number of volcano-tectonic earthquakes (VT) of 07-09-2022: 307
Area concerned by the VTs: Summit cone - The earthquakes were located on the northern edge of the Dolomieu crater. Sangay – 07.09.2022 at sunrise, we can see the traces of incandescent material that fell from its face without snow during the night – Eqphos_photography via Volcan Sangay Facebook - one click to enlarge

The level of activity in Sangay, in Ecuador, remains high both internally and on the surface from 06 to 07 September / 11 a.m.
Seismicity is characterized by Explosion (EXP) 446, Long Period (LP) 9, Emission Quake (TREMI) 66
VAAC Washington reported 3 emission alerts, with a maximum height of 1,770 m above crater level, in a westerly direction. The area is mostly cloudy today, there are no observations from
on the surface.
Alert level - SNGRE: Yellow In a special notice issued on September 2, PVMBG reported that tiltmeter deformation data for Marapi Volcano in Central Sumatra showed a trend of summit inflation and deflation along the flanks.

Seismicity continued to fluctuate with the dominant signal indicating hydrothermal activity. A phreatic eruption was the most likely type of volcanic activity that could occur at the volcano, based on recent data, and it could occur without warning.

The PVMBG reminded the public to stay at least 3 km from the summit. The alert level remained at 2 (on a scale of 1 to 4). The activity of Semeru, on the island of Java, was maintained between August 31 and September 06, according to the PVMBG.

Activity level remains at 3/siaga, with recommendations
- to carry out no activity in the southeastern sector along Besuk Kobokan, up to 13 km from the summit (the center of the eruption). Outside of this distance, the community does not conduct activities within 500 meters of the bank (river edge) along Besuk Kobokan due to the potential for expansion from hot clouds and lava flows. at a distance of 17 km from the summit.
- not to move within a radius of 5 km from the crater / summit of Mount Semeru because it is subject to the danger of stone throwing (incandescent).