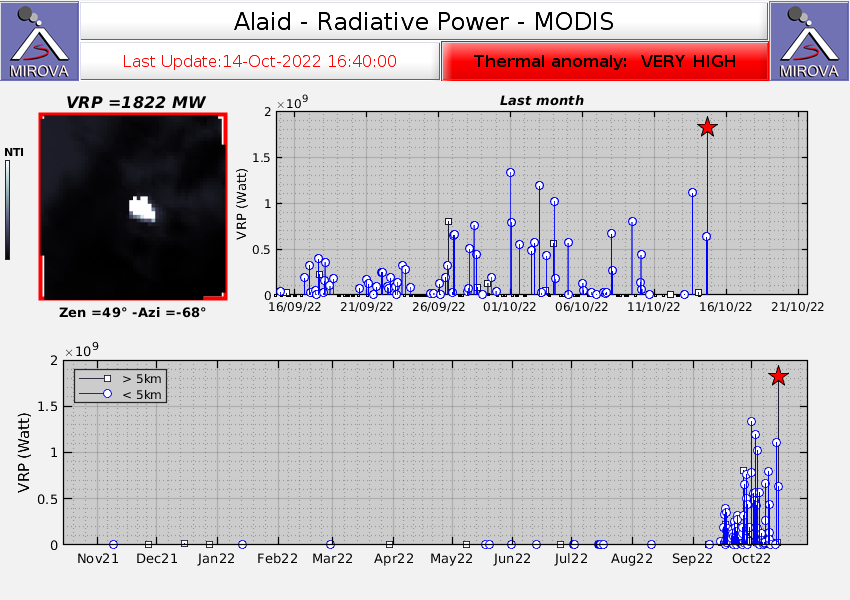 Moderate eruptive activity of the volcano continues. Ash explosions up to 8 km (26,200 ft) above sea level could occur at any time. Ongoing activity could affect international and low-flying aircraft. The aviation color code remains orange. A moderate eruptive activity continues at Ebeko on October 14, with a plume of gas and ash up to 2.4 km a.s.l., drifting southeast from the volcano.

Ash explosions up to 6 km. asl. could occur at any time and affect aircraft operating at low altitude and the airport of Severo-Kurilsk. The aviation color code remains at orange. Two moderate earthquakes occurred beneath the southern tip of the island of Hawai'i at 9:07 a.m. this morning. The first earthquake (magnitude -4.6) occurred slightly offshore and south of Pāhala, about 13 km (8 mi) deep. It was followed 24 seconds later by a larger 5.0 magnitude earthquake just south of Pāhala, 7.4 km (4.6 mi) below Highway 11. These two larger earthquakes were followed by a series of aftershocks, mostly below magnitude 3.0, but some of the largest down to magnitude -4.0. The aftershock sequence continues, between 0 and 12 km (0 and 7 mi) depth, south of Pāhala. Aftershocks could continue for days or even weeks and be large enough to be felt.

The volcanic alert is Advisory, and the aviation code Yellow. This week, from October 7 to 13, 2022, 7 lava avalanches were observed at Southwest Merapi, dominant up to the Bebeng River with a maximum slip distance of 1,500 m.

Mount Merapi's deformation that was monitored using EDM and GPS this week showed no significant changes.

The activity remains at level 3 / siaga, with unchanged recommendations. The INGV OE reports that the eruptive scenario at Stromboli seems to be in sharp decline compared to what was observed in the previous days. The projection activity at the level of the N 2 crater (North zone) persists but is much more contained, as well as the thermal anomaly associated with the apical portions of the lava flow which seems to decrease. Field observations report that the lava flows seem to be no longer fed, however this consideration could be affected by the uncertainty due to the progress of the lava flow inside the erosion channel.

The evaluation of the state of the lava flow and the altitude of the lava fronts will be carried out when the marine conditions are attenuated from the boat and by observing the Sciara del Fuoco from the front. The frequency and magnitude of collapses mainly from the lava front decreased, ordinary explosive activity fell to the lowest level.
From the seismic point of view, since the last update, no significant change has been recorded: the average amplitude of the volcanic tremor continues to show small fluctuations in its values ​​and always remains confined to the medium-low level.
The GPS signal from Timpone del Fuoco (STDF) records at 17:20 UTC on 10/13/2022 an impulsive variation of the eastern component of about 1.5 cm. This variation is not visible on the clinometric signals. Other analyzes are in progress for the interpretation of this signal.

Note that with the eruptive activity, new mudslides and ash / blocks affect Stromboli