Activity of Bezymianny, Cotopaxi, and seismic swarm north of Herðubreid. 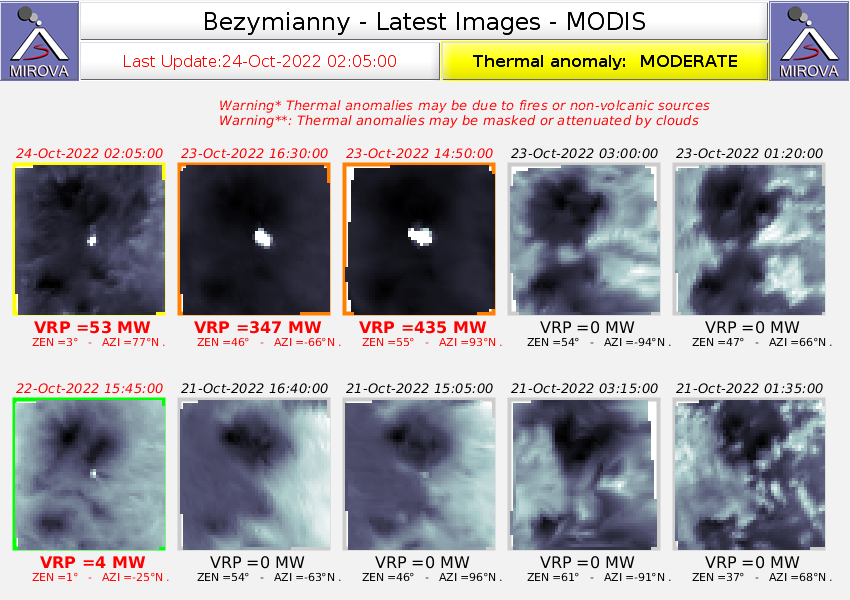 A strong explosive eruption occurred on October 23, 2022 at Bezymianny, in the Kamchatka Peninsula. The explosions sent ash up to 10 km a.s.l.; the ash plume extended 10 km east northeast of the volcano.

The explosive eruption of the volcano continues. Ongoing activity could affect international and low-flying aircraft.

KVERT changed the aviation code from Orange to Red at 12:20 UTC.

In the early hours of the morning of October 22, the Cotopaxi volcano cleared for a moment and a steam emission was observed 1000 meters in a westerly direction. Then the Washington VAAC reported 2 ash emissions with heights up to 2353 meters above the summit in a northeast and west direction.

Seismicity is characterized by 46 Long Period earthquakes, 1 Volcano-tectonic earthquake, and an episode of emission tremor.

Rains were recorded in the area, which did not generate lahar.
For the moment, the volcano sector remains cloudy, which is why visual observations cannot be made. Last night, a slight ash fall was reported at the José Rivas refuge.

On Sunday October 23, the summit of the Cotopaxi volcano appeared, on the Sincholagua camera, with a layer of dark gray ash, the result of the emissions of the previous days.
The October 21 emissions were accompanied by a seismic signal called a volcanic tremor, which lasted 4 hours and then decreased in intensity in the early hours of October 22.

The seismicity over 21 hours is characterized by 481 explosion earthquakes, 34 LP earthquakes, 77 episode of tremor of emission, and one in corrélation with a lahar.

The IGEPN announces that light rain has been recorded via the Windy application. A high frequency signal was observed at the BREF seismic station, possibly related to small secondary lahars which are caused by weathering of the ice sheet by the ash cover at the summit.

A slight emission of gas and water vapor was observed at a height of 500 meters above the summit towards the east.

The alert level has been changed to amarilla. On October 22 at 11:11 p.m., a magnitude 4.1 earthquake was measured, just north of Herðubreid. Notifications have been received by the Meteorological Bureau that the earthquake has been detected in Akureyri. A total of three earthquakes were measured above magnitude 3.

Considerable post-seismic activity was observed in the area overnight, and the Norwegian Meteorological Agency's automatic earthquake system located around 600 earthquakes in the area north of Herðubreid.

Herðubreid is part of the Askja system, which shows certain signs that it is preparing for activity. "I can definitely say that there will be an eruption in this area, but when it will happen it's harder to say," says volcanologist Þorvaldur Þórðarson about the possibility of an eruption at Herðubreid.