In the past 24 hours, nine eruptions are reported at Home Reef by TGS, as well as a 5-day decline in activity with steam-dominated eruptions, with no traces of ash. The volcanic plume disperses over the ocean and causes discoloration of the waters.

A zone of 4 km is forbidden to navigation, and the aviation code is yellow. 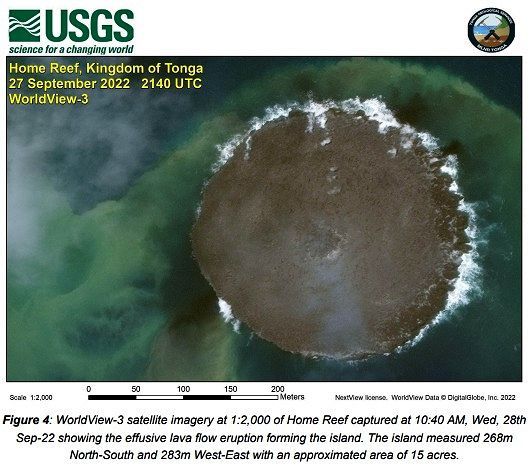 The Sernageomin monitoring stations, installed near the Laguna del Maule Volcanic Complex, have recorded a seismic swarm since October 1 at 10:06 p.m. local time, which has 330 volcano-tectonic events (VT) associated with the fracturing of rocks at the time of the report on October 2 at 8 a.m. local time. still in progress.

The characteristics of the strongest earthquake: ML 0.2 – depth 2.9 km.

The episode being low energy, the technical alert remained green

At Nevados de Chillan, the Sernageomin recorded this October 2 at 4:30 p.m. an LP earthquake associated with internal fluid dynamics, dz m^zmz than an explosion, accompanied by a plume of ash and gas.

The alert remains at amarilla.

The eruption started at Piton de La Fournaise on 09/19/2022 around 07:48 local time continues. The amplitude of the eruptive tremor (indicator of surface lava emission) continues to increase since September 29, 9:40 p.m. local time yesterday (5:40 p.m. UTC). This intensification is most certainly linked to an increase in pressure within the eruptive cone at the origin of an increase in activity at the level of the eruptive vent observed for more than 48 hours.

Images from the OVPF-IPGP webcam located at Piton de Bert show:
- still significant lava projection activity at the eruptive vent
- the secondary vent, located on the southern flank of the cone, is active again;
- degassing is still observed at the eruptive site;
- the majority of the lava flows are always done by lava tunnels within which many resurgences are visible in particular near the eruptive cone. 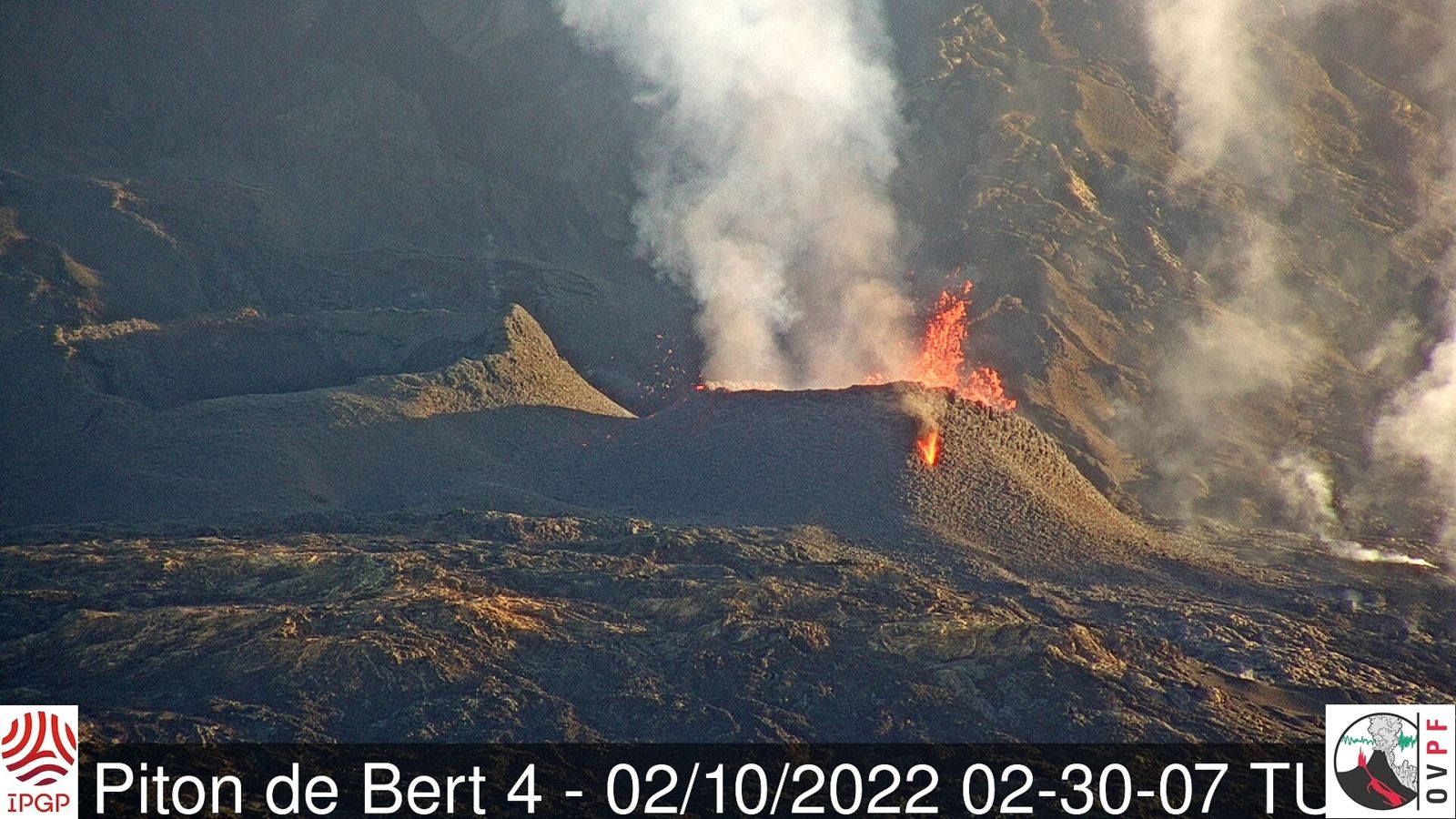 The lava flow estimates established by satellite method on the HOTVOLC (OPGC - Clermont Auvergne University) and MIROVA (University of Turin) platforms indicate an average flow over the last 24 hours of 5 to 15 m3/s. Estimated lava flows have been increasing since the tremor intensification observed on September 29. As lava flow activity now takes place primarily in tunnels, these estimates are minimum values.

The acquisitions of the COPERNICUS program developed by the European Commission provide images of the TROPOMI instrument intended for the observation of the composition of the atmosphere, and in particular the concentrations of SO2. The image of October 1 (09:44 UTC) indicates a notable increase in degassing, with a plume more concentrated in SO2 than the previous days, and visible up to a distance of about 400 km.

Below is the evolution of the integrated mass within a radius of 300 km for the last few days (7 km altitude): The direction of plume transport is still compatible with an altitude of about 3 km. At this altitude and in the hours preceding the acquisition, the wind speed was about 7 m/s (approx. 25 km/h). Thus, the plume visible over a distance of 300 km, with a mass of 1.5 kton, corresponds to an integrated emission over approximately 12 hours, which leads to an estimate of the average flux of SO2 of approximately 3.0 kton/day over these last 12 hours. The true altitude of the plume, less than 7 km, implies that this value is an underestimate (perhaps by a factor of 2 to 5). (©ESA-Copernicus (TROPOMI); GVO (volcanoes); AERIS/ICARE-LOA (VolcPlume portal); INERIE-LCSQA-ATMO France / GEOD'AIR; IPGP).

24 volcano-tectonic earthquakes were recorded directly above the summit area during the day of October 1.

The data from the permanent GNSS stations of the OVPF-IPGP no longer show signals associated with a significant deformation of the building.

Alert level: Alert 2-1 (Access to the Enclosure prohibited; eruption in the Enclosure without any particular threat to the safety of persons, property or the environment). The activity of the Sorikmarapi volcano on Sumatra has continued at fluctuating values ​​since January 2022.
The PVMBG Volcano Observatory has detected about 146 volcano-tectonic earthquakes since September 29, but without any high visual activity. This may suggest increasing pressure from the hydrothermal system and/or magma within the volcano edifice. On October 2, the PVMBG reports six deep volcanic earthquakes, with an amplitude of 2-43 mm, S-P 0.7-2.5 seconds and an earthquake duration of 4-25 seconds.

However, the alert status remains at level 1.
In order to avoid the potential danger of volcanic gases or sudden phreatic explosion, people and tourists are not allowed to approach the nearby main crater. 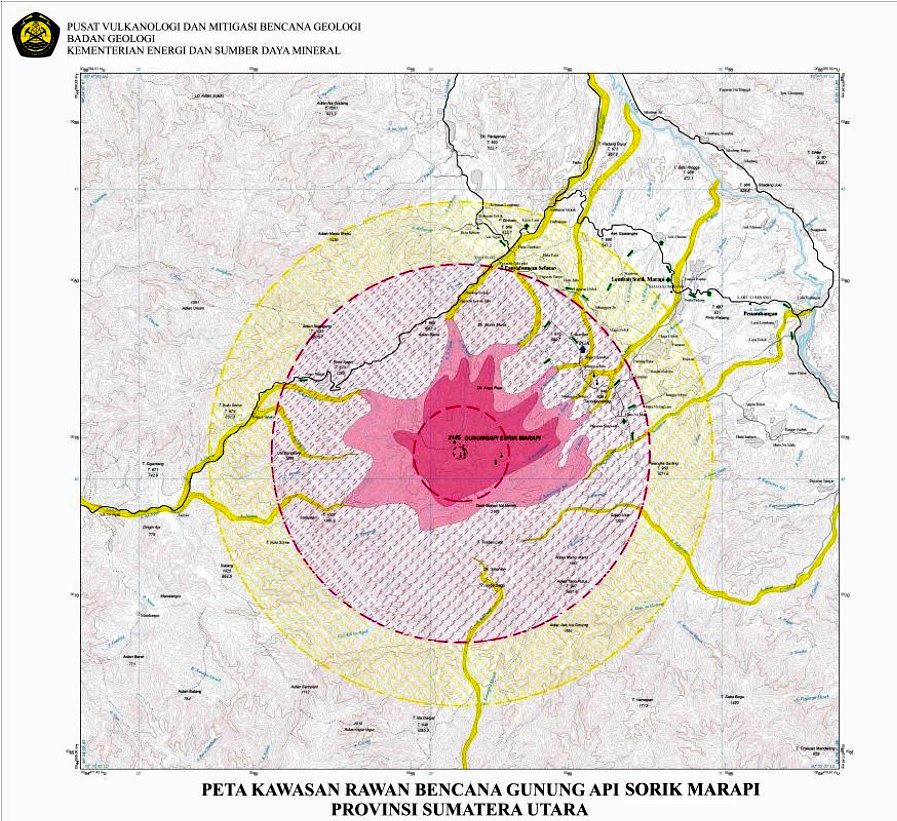