Activity of Villarica, Reventador and Stromboli. The P.O.V.I. reported on October 18 an incandescence above the rim of the crater of Villarica, Chile, visible on a clear night.

After an ash pulse on September 24, the volcano's activity indices began to gradually increase. On Tuesday, October 18 at 7:17 p.m., the POVI was able to observe the first lava fountains and Strombolian explosions. 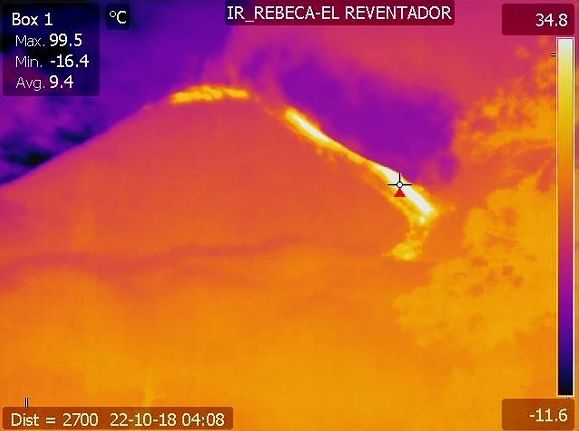 At Reventador in Ecuador, the IGEPN reports moderate surface and internal activity levels, and an unchanged trend.

On October 18 around 11 p.m., incandescence was observed at the crater and at a lava flow on the northeast flank.

The alert level remains at Naranja.

Between October 10 and 16, INGV personnel carried out various remote inspections and observations of the Sciara del Fuoco (SdF) of Stromboli from an altitude of 190, 290 and 400 m. a.s.l. and Roccetta.
Between October 10 and 16, the lava flow infeed showed a gradual decrease from what was observed on October 9. The lava field developed gradually over the days, with many overlaps of smaller flows. The lava front also showed a slow retreat from 400 m a.s.l. until Oct. 11 to 600 m a.s.l. on Oct. 16.

Due to the pulsatile regime of the lava flow, frequent collapses and detachments of material were triggered from the lava channel eroded by the flows and from the front of the flow itself which, rolling along the Sciara del Fuoco, quickly reached the coast and spilled into the sea, forming a delta of debris.

Upon contact with water, the material dispersed forming lobes, while clouds of steam and ash formed which rose into the air.

As for the explosive activity, it remained at a low level with intense spattering activity, of variable regime, at the level of the N2 crater (North zone) and with phases which sometimes culminated in fountains.

On October 14, the eruptive activity seemed to be significantly lower than what was observed the previous days. The projection activity at the level of the N2 crater (North zone) was more contained and the thermal anomaly associated with the apical parts of the lava flow seemed to attenuate. The frequency and magnitude of material collapses had decreased significantly.

However, on October 15, one of the vents in the northern area of ​​the crater (vent "N2") continued to show pulsating "spattering" activity (jet of pieces of fluid lava up to a few tens of meters), which was documented in a video made by a drone as part of the UNO project.

The INGV OE communicates on October 17 that the surveillance network recorded at 9:18 a.m. local time the resumption within the parameters of normal activity.