Anak Krakatau experienced a new eruptive episode on Thursday October 27, 2022 at 12:05 WIB with the height of the ash column observed at ± 250 m above the summit (± 407 m above sea level). The ash column is observed to be gray with a thick intensity towards the northeast. This eruption was recorded on a seismograph with a maximum amplitude of 37 mm and a duration of 25 seconds.

VAAC Darwin has issued an Orange Aviation Code.
Activity level remains at 3/siaga, with recommendation: Communities/visitors/tourists/climbers do not approach Mount Anak Krakatau or engage in activities within 5 km of the active crater. After its strong explosive eruption on October 23 and 24, the extrusive-effusive eruption of the Bezymianny volcano continues; strong fumarole activity, incandescence of the lava dome at night, and hot avalanches accompany this process. Sometimes the large ash clouds formed after hot avalanches, for example, such a 10x13 km ash cloud moved 70 km east of the volcano on October 26. Likely, the next strong explosive eruption could occur at any time. KVERT continues to monitor the Bezymianny volcano.

The extrusive-effusive eruption of the volcano continues, but the activity of the volcano remains very high. Strong ash explosions up to 10-15 km (32,800-49,200 ft) a.s.l. could occur at any time. Ongoing activity could affect international and low-flying aircraft.

The incandescence of the crater was visible at night. A total of 119 explosions from October 17–21 produced eruption plumes that rose up to 2 km above the crater rim and ejected blocks up to 800 m from the vent. Occasional rumbling and ash fall was reported in Toshima village (3.5 km SSW).

Only one explosion was reported from October 21 to 24. Plumes rose up to 1.5 km and boulders were ejected up to 200 m from the vent. Ash falls were reported in the village of Toshima.

The Alert Level remained at 2 and the public was warned to stay 1 km from the crater.

On October 28, a new episode occurred, filmed live by the JMA

This Wednesday, October 26, from approximately 7:00 p.m. TL, the Achupashal station in Tungurahua, Ecuador, recorded seismic signals corresponding to the descent of mudslides and debris (lahars) from the Tungurahua volcano. It is important to highlight that the Baños-Penipe highway crosses the mouth of this ravine, so the circulation of vehicles must be careful in case secondary lahars descend towards said highway. 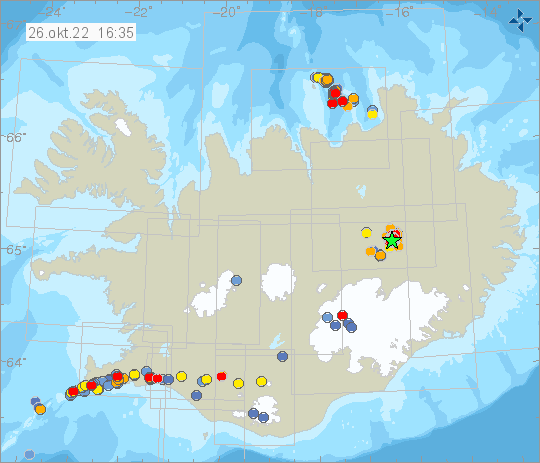 The difference is largely explained by an earthquake swarm near Herðubreið that started on October 22, but swarms are also underway in Reykjanes and Grímsey.

They were located near Herðubreið, Grímsey, Reykjanes and Reykjanes Ridge.

More seismic activity was detected in all regions compared to the previous week, except in Mýrdalsjökull. 20 earthquakes were detected in Grímsvötn and 5 in the Hekla volcano.