However, daily visual and camera monitoring of the summit crater revealed continued aseismic growth of its lava dome. As of October 4, 2022, the lava dome has increased in volume by approximately 48,000 m³ since August 20, 2022. Eye inspection of the summit during an aerial survey this morning confirmed the presence of freshly extruded lava at the base of the summit lava dome. The event was only reported by sightings of fine remobilized light-colored ash, likely from lava fragmentation during the extrusion process, on the floor of Miisi Gully since October 2, 2022.

In contrast, short-term ground deformation data relative to August 2022 resulted in short-term deflation on the Mayon edifice from east to southeast, and only mild short-term inflation on the general flanks west to southwest. Longer-term ground deformation parameters based on EDM, precise leveling, continuous GPS and electronic tilt monitoring show that Mayon has been inflated slightly, particularly to the northwest and southeast. is, since 2020.

Finally, SO2 emissions were last measured by the Flyspec campaign on October 1. 2022 was on average 391 t/d, below the reference levels.

In view of this, DOST-PHIVOLCS is raising the Alert Level for Mayon Volcano from Alert Level 1 (abnormal) to Alert Level 2 (increasing unrest). This means there is ongoing unrest driven by shallow magmatic processes that could eventually lead to phreatic eruptions or even precede a dangerous magmatic eruption. The public is strongly advised to be vigilant and refrain from entering the six (6) kilometer radius Permanent Danger Zone (PDZ) to minimize the risk of sudden explosions, rockfalls and of landslides. This week from September 30 to October 6, lava avalanches were observed 5 times southwestward at Merapi, dominating up to the Bebeng River with a maximum slip distance of 1,800 m and 1 time westward (upstream of Kali Putih) with a sliding distance of 800 m.

The southwest dome and the middle dome still show growth, but no significant morphological changes have been observed. According to calculations from aerial photos with drones, the volume of the southwest lava dome is 1,626,000 m³ and the central dome is 2,772,000 m³. Mount Merapi's deformation that was monitored using EDM and GPS this week showed no significant changes. The public should not carry out any activity in potentially dangerous areas, anticipate disturbances due to volcanic ash from the Merapi eruption and be aware of the dangers of lahars, especially when it rains around Merapi. The soil deformation measurement campaign, from Vulcano, makes it possible to discover the other Aeolian Islands - Doc. INGVvulcani - one click to enlarge Measurement campaign on Vulcano - Lipari, including the capisaldu sulla Forgia, installed during the crisis of the 1990s - Doc. INGVvulcani - one click to enlarge

The soil deformation measurement campaign on the historic network of Lipari and Vulcano also includes the capisaldu sulla Forgia, installed during the crisis of the 1990s Ischia - location in relation to Vesuvius and the Phlegraean Fields - Doc. INGV OV Ischia - location of hypocenters and magnitude of earthquakes over the past 12 months - doc. INGV OV

During the month of September 2022, no earthquake was recorded in Ischia.
The last event occurred on 08/31/2022 at 00:59 UTC (Md = 2.5 ± 0.3)
A slight general subsidence remains, more evident in the central-southern part of the island.
Ground tilt directions show a predominant tilt pattern towards the N.
No significant variation in the maximum temperature and no change in the surface distribution of the fumarolic field are observed at the different measurement points.
Based on the current picture of volcanic activity described above, there are no elements suggesting significant short-term developments. 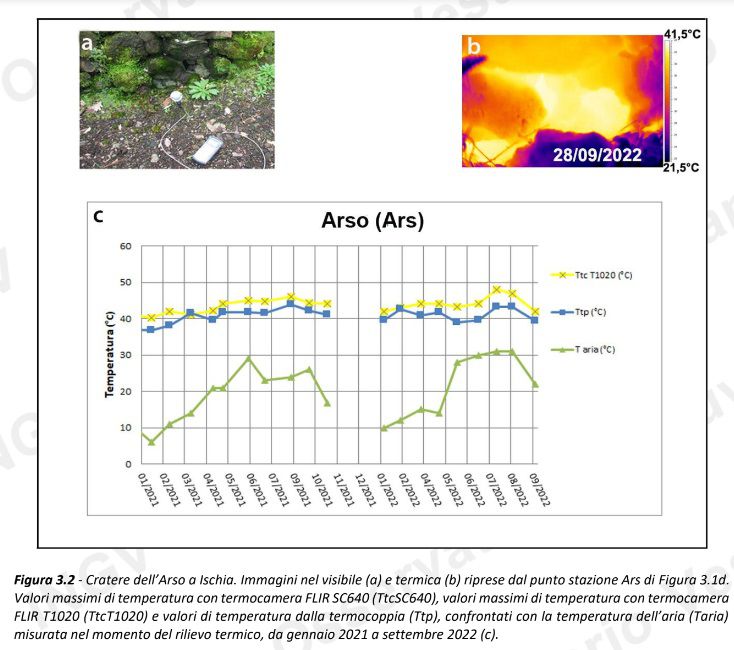 From April 2022, at certain sites and when conditions allow it, with the FLIR T1020, temperature measurements are also carried out using a drone equipped with a high-resolution FLIR VUEPRO thermal camera (640x512 pixels) and accuracy ± 5°C.