Adequate shelters could they avoid dead from volcano Ontake?

According to media reports, including The Japan Times, Tha Japan News and CNN, the death toll from the eruption of Ontake September 27 continued to widen. Emergency services have just found 12 more bodies, bringing the death toll to 48.

Although the review of most of the victims is still ongoing, the official cause of death of the latter is recorded as "injury from direct impact by volcanic volcanic cinders (bombs) ". 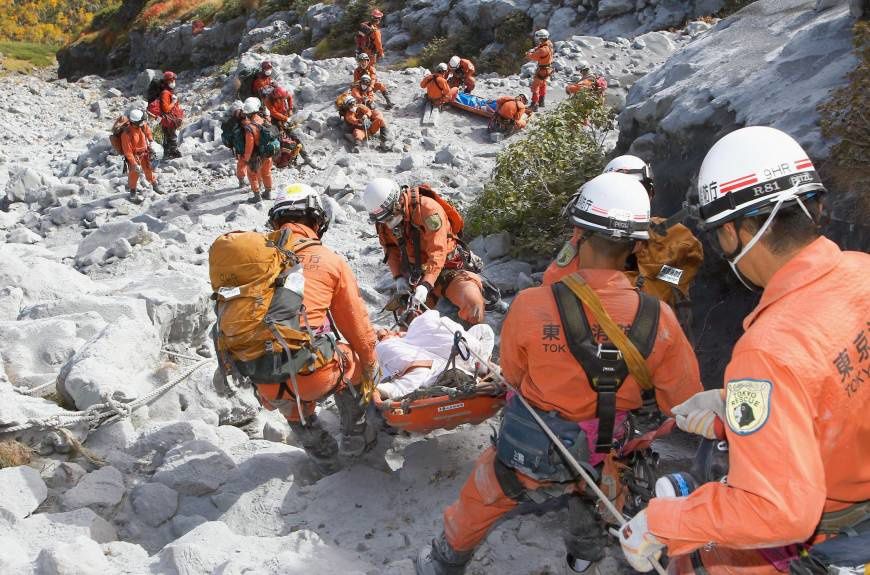 It is noted that during the sudden eruption Saturday, hikers who managed to reach shelter in lodges near the top survived !

A survivor said: "I was busy taking a break, along with 18 other hikers near Lake Ninoike north side of the summit when the eruption occurred we rushed to a remote cottage of one. twenty meters. when the group reached the shelter, the rocks began to rain on the roof, and we saw numbers splashed in the lake Ninoike (impacts bombs) ... “If we hadn’t had any place to escape, we could have been hit by the rocks and lost our lives. "

On Mount Ontake, there are 16 mountain huts and unnammed shelters, usually used as shelters during snow storms or bad weather ... but most are made of wood, unable to bear the weight of the ash in case of eruption. The lodge near the top saw its roof pierced by bombs and smashed windows, allowing the ashes to engulf.

No shelter in reinforced concrete exists on the Ontake volcano, and officials regret: "No injuries were criticized in previous eruptions, so we did not consider it necessary to build such shelters. We’ve equipped mountain lodges with helmets and walkie-talkies [for use] in the event of a sudden eruption. However, it would have been possible to reduce injuries if there had been reinforced shelters and other facilities "(translated from an interview in the Japn News / The Yomiuri Shimbun) Damage on the shelters of the summit of Ontake, by ash and rock fall (bombs) - photos Japan Times

The Japan News regrets the lack of such shelters on many Japanese volcanoes yet visited by many hikers and tourists.

Of the 47 volcanoes monotoring by the J.M.A., only twelve are equipped with anti-fallout shelter. Mount Fuji, which was attended by 280,000 hikers this summer, has no shelter of this type.

At Mount Aso, where three tourists were killed in 1979, 14 anti-fallout shelters are built close to the vent.

On the Asama, where eruptions occurred in 2004 and 2009, three semicircular arches are present within 500 meters of the crater, and another halfway. Together, they can accommodate a total of 300 people on sudden eruption. Asama - shelters built at 500 m. of the crater - Courtesy of Komoro municipal government in Nagano Prefecture / The Japan News

Mr. Tadahide Ui, at the Crisis and Environment Management Policy Institute, says "Shelters built with consideration of the direction entrances face and other factors are useful in protecting people from cinders or ash deposits. In addition, it is important to make adequate preparations, such as equipping such facilities with helmets and other materials". It is also important to equip these shelters with helmets and survival equipment. Information on volcanic hazards should be expanded and distributed widely to nearby populations and hikers or other visitors.