Art on the way of fire - the paintings of masters learn about air pollution.

Few large eruptions in the 19th century were responsible for emissions of ash and sulfur aerosols which are mounted in the stratosphere and made several trips around the world. These eruptions were thus responsible for climate impact , but also optical phenomena : the veil of aerosols was due orange and red colors of the sky An explanation is given by Prof Zerefos and his colleagues , in an article in Journal of the European Geosciences Union: " In the coloring sunsets , this is the way the brain perceives the greens and reds which contains important information about the environment. "

The particles suspended in the air (dust and sulfuric acid microdroplets ) deflect a portion of the light emitted by the sun, changing shades of visible light spectrum visible by the human eye.

Masters of the 19th century , witnessed this phenomenon without understanding the cause , painted these specific colors.

He painted spectacular sunsets , especially in his painting " Dido building Carthage " in 1815, held at the National Gallery in London, or in "The Lake, Petworth ."

This phenomenon is also readable in some paintings of  Edgar Degas, made ​​in the two years following the eruption of Krakatoa in Indonesia in 1883 . 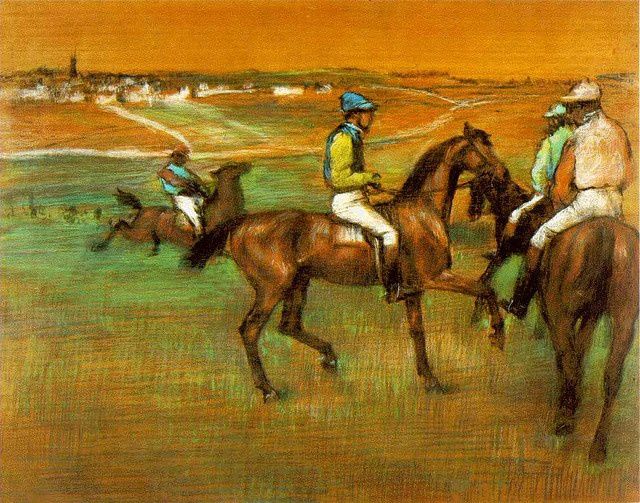 Christos Zerefos and his colleagues analyzed hundreds of sunsets painted between the years 1500 and 2000 , potential witnesses fifty major eruptions listed around the world , seeking to identify the presence of air pollutants in these landscapes.

They argue in their study, regardless of the artist or style , have discovered " that the relationship between the proportion of red and green in the twilight painted by these masters corresponds with the amount of volcanic aerosols in the atmosphere ."

Observations of  Zerefos , an atmospheric scientist at the University of Athens, are consistent with the analysis of contemporary ice cores of these events and the findings at the site of eruptions. Model validation : Photos above : paintings of Hydra by P.Tetsis, in AOD - Aerosol Optical Depth - high conditions, to the left and in low conditions, to the right. Photos below : digital photos of the landscape in the same atmospheric conditions, taken in the middle of the time limit for implementation of the painting./ in the studies of Zerefos & al. of

The validation of this model of paintings analysis for direct use in climate models to get a more accurate idea of how aerosols and atmospheric pollution have affected the climate over recent centuries, was made through the contribution of the artist Panayiotis Tetsis , a renowned colorist . He was asked to paint sunsets during and after the passage of a cloud of dust from the Sahara over the Greek island of Hydra in June 2010.The painter had not been notified of this passage cloud of dust, and the colorimetric analysis of the landscape corresponds to the atmospheric samples taken.