Art onthe way of fire - Alechinsky and "Album and blue ."

Since 1985, in a shady copse facing the library of the Faculty of Law of the University of Liège , an open book, blue and white colors, offers us a world view of Alechinsky . "Album and Blue " - a work of Alechinsky, in the Open Air Museum of Sart Tilman / Liège University - photo Nadine Govers

"Album and Blue" ... two vertical concrete panels , illustrated with 48 plates enamelled lava ,  give the forms and themes explored by the painter for fifty years: telluric themes (including erupting volcanoes ) , the planet orbits , plant spiral , images of Wallonia's legend (with the Lion of Waterloo , or Gille of Binche) . As a moral fable, the story ends , bottom right , with a skull ... remember that you are mortal !

Symmetrical in the provision of its two "pages" , the work is also deployed in a very elaborate set of mirrors . In the Middle Ages, the "mirror" ( speculum ) meant a kind of encyclopedia reflecting the world or even the ideal of the reader . 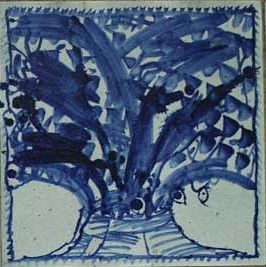 "Album and Blue " by Pierre Alechinsky : detail of a panel of enameled lava to Earth theme. - Photo Open Air Museum of Sart- Tilman . On a slab , the work is signed twice ... legibly and mirror, as a double page , repeating the arrengement of the concrete walls and glazed lava .

The colors of the work - album ( white in Latin) and blue - is the result of a deliberate choice , not a technical constraint , as an allusion to the plates in Delft, the Portuguese "azulejos" , or simply popular ceramics . ( after Jean Housen and Yves Randaxhe ) 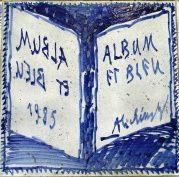 Alechinsky , born in 1927 in Brussels , is a painter and printmaker , bringing in his work expressionism and surrealism . Left handed prevented , according to the fashions of the time , the educators leave him his left hand for minor works ... the drawing.

From 1944 to 1948 , he studied book illustration, typography, printing techniques and photography at the National Superior School of Architecture and Visual Arts of La Cambre in the Belgian capital . He discovered during these years the work of the Surrealists.

It becomes a major player in the Belgian art world of post-war and co-founded the Ateliers du Marais. He joined in 1949 the CoBrA movement , which brings together artists from Copenhagen , Brussels and Amsterdam. CoBrA advocates a return to a more challenging art  .

It will gradually abandon the oil in favor of materials that allow him to express a fluid style, as the ink. Fascinated by oriental calligraphy , he made several trips to the Far East.

Staying in New York in the 60s , he discovered acrylic paint , which is initiated by Wallace Ting . It opens in Central Park " the painting with marginal remarks ," where like the cartoon, the central image is surrounded on all sides by a series of vignettes filling  the painting .

Among its production, I pinned some etching and lithograph of the " erupting volcano " .