The small island of Corvo is located north of Flores in the western part of the archipelago.
With an area of ​​17.12 km ², it is inhabited by some 500 people, mostly gathered in the city of Vila do Corvo, to the south.

Albeit isolated, Corvo has been the target of attacks by pirates and privateers. In exchange for protection, the island has allowed them to find a place of supply, care for the crews and repair of vessels. It was nevertheless sacked by English privateers in 1587. These two islands emerge from the same submarine bench oriented NNE-SSW, anchored on the North American tectonic plate, to the west of the Mid-Atlantic Ridge. Tectonic Sitauation of Flores-Corvo group west of the Mid-Atlantic ridge.

The subaerial activity phase is first marked by a basaltic volcanism, before moving to trachytic eruptions, most explosive, including some linked to the formation of the caldera. Then, the activity return to a basaltic volcanism, with Hawaiian and Strombolian eruptions. The most recent episodes form the cinder cone of Coroinha. Monte Gordo sees its western edge truncated by wind and marine erosion. A cliff of 700 meters is forming above the ocean.
Its caldera, the Caldeirão, off 2,000 meters is occupied by cinder cones, intrusion vein, two permanent lakes and other ephemera. 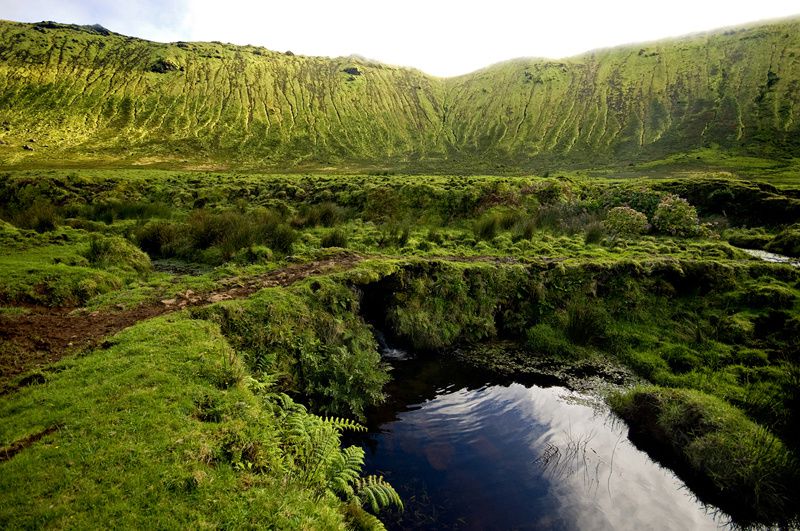 The slopes of the volcano are partially preserved in the east and south, where secondary cones are preserved from erosion. Morro da Fonte,  Grotão do Castelhana and Coroa do Pico are responsible of basaltic flows that formed the fajã lavica, a lava delta high of 10-60 meters. Northwest of the island, small ilets,  ilhéu dos Torrais and Ilhéu do Torrão, and submerged reefs make the navigation perilous near the coast. 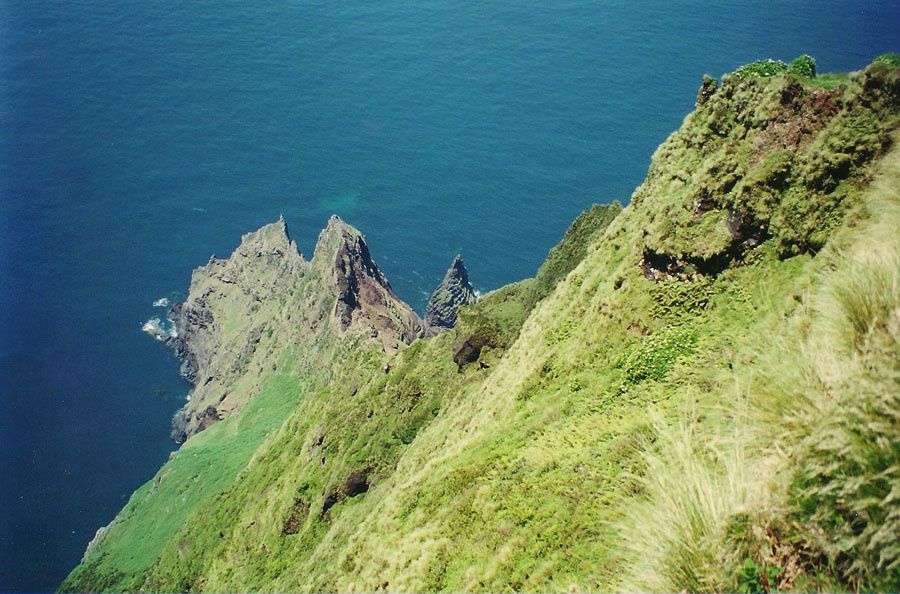 Corvo landscape is characterized by dark stone walls dividing the properties. Paillers walls of basalt, used for storage of feed and tools, enhance the dark and austere landscape appearance and earned the nickname of Corvo, "the black island" . Green pasture is combined with the color of juniper and grain plantations.

To Ponta Negra, south of Corvo, small windmills, conical trunk, deploying sails and dot the horizon of white. The wooden dome can be rotated to orient the wings depending on the wind direction. They are used to grind grain and corn. Corvo / Azores - moinhos to the south of the island- in the background, Flores Island - photo Moinhos açorianos