After 12 days of earthquakes, on September 23, 1957, around 6:30, the sea surface begins to boil, and vapors are emitted one kilometer NW of the lighthouse.
Three days later, the activity increases: black ash and steam are emitted off the coast.

On 27 September, at 6:45, a submarine eruption begins 300 meters from Ponta dos Capelinhos. A cloud of mud, solid fragments and gas amounts to about 1,000 meters, and reach an area of 1,200 meters around. The surrounding buildings undergo their first damage: broken windows, tiles falling from roofs. The next day, the ashes cover the extreme west of the island of Faial, requiring the evacuation of Norte Pequeno and Canto. Faial - Eruption Capelinhos 1957 - plume and base surges; scale is given by the lighthouse in the foreground - do Espolio TC José Agostinho-Museu de Angra do Heroismo / Siaram The Surtseyan phase will last seven months and a half : big explosions, accompanied by gas and black ashes cypressoïdes plume, will succeed, and formed from 10 October an island named Ilha Nova, The eruption will experience periods of high activity, alternating with other more quiet ... October 29, the island reached a diameter of 800 meters and a height of 99 meters. It will disappear into the sea on October 30.

In November, the frequent ash emissions will create new islands that will unite to form an isthmus linking to Faial. 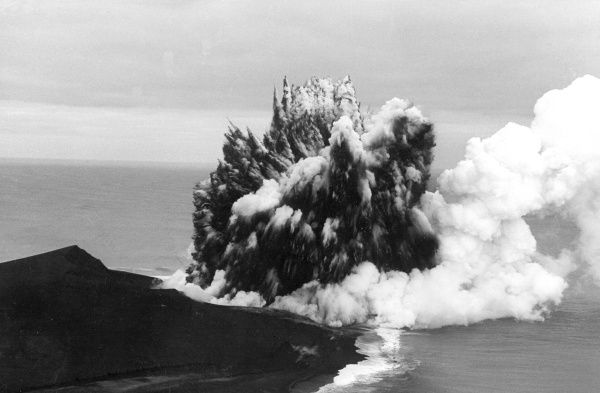 Mid-December, began an transient subaerial effusive phase . A fault opens on the eastern part of the cone, where seven streams of lava amount to 10 -15 meters high arise. Then the activity focuses on three fireplaces with Strombolian explosions at short intervals.

From May to October 1958, the volcano in a subaerial phase with Strombolian characteristics. The passage of the underwater phase to the land phase is marked by a seismic crisis in the night of 12 to 13 may, during which 450 aftershocks recorded. The eruption has periods of high explosivity, accompanied by projections of incandescent lava fragments more than 500 meters in height, interspersed with episodes of effusive character, and the emission of lava flows of variable viscosity.

The eruption is weakening from September 58, and a last emission of lava is observed on October 24. After thirteen months of operation, the main cone is 160 meters high; the total volume of material emitted, lava flows and tephra of olivine basalt, is 174 million cubic meters ... the island grew from 2.4 km ². The damage is significant on neighboring villages, Capelo, Praia do Norte and Cedros; cultivated fields are covered with a thick layer of ash, but no victims.

The affected people are forced to migrate, significant between 1957 and 1960. The Azorean Refugee Act of September 2, 1958, authorized the emigration of 1,500 people in the United States. The village of Capelo after the eruption - photo A soma dos dias. Faial - a house roof collapsed under the weight of ash - photo A soma dos dias.

Since then, the costal erosion reduces cone ... in the sixties, ten meters flanks of the volcano are lost each year in the Atlantic Ocean. 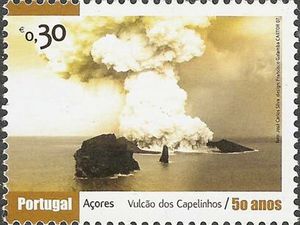 For volcanophilatélistes - commemorative stamps 50th anniversary of the eruption

- The Capelinhos Eruption: Window of Opportunity for Azorean Emigration