Pico Island, immediately adjacent to Santa Maria which it is separated only by a shallow sea arm, is dominated by the volcano of the same name. Its area is 445 km ² and is 42 km by 15.2. Discovered before 1439, it was first called all São Dinis, before being colonized from 1460. The Montanha do Pico, or Ponta do Pico, is a stratovolcano which rises to 2,351 meters above sea level. The dominant basaltic volcano was built on the volcanic complex Montanha, a former elongated volcano slopes more sweet, consisting of basaltic lava flows and adventitious cones.

He wears a summit crater 500 meters wide and 30 meters deep, in which there is a small cone with steep walls 70 meters high: Pico Pequeño or Piquinho, one of the few peaks of the Azores to be covered with snow in winter. Pico / Azores - the top of the Montanha do Pico, with the Pico Piquinho and snowy high slopes Historical eruptions are located on the slopes of Pico and in the east rift zone dotted with pyroclastic cones Hawaiian / Strombolian type:  the Sao Roque Piedade volcanic complex. To the west of Pico, in the channel of Faial, the Ilheus da Madalena, 52 and 59 meters high, are the remains of a volcanic underwater apparatus destroyed by wave erosion and tectonic forces. They consist of palagonitised tuff ,of phreatomagmatic origin. Seen from Pico, Ilheus da Madalena and in the background, the island of Faial - photo Carlos Luis MC da Cruz

The vineyards of Pico and the Currais :

The vineyards of Pico form a landscape listed by UNESCO in 2004.

Vines are planted in a rich, dark volcanic soil in small plots surrounded by walls facts in lava rock (from mopping the soil at walls implantation). These walls, reaching the waist, called " Currais or Curraletas ", have a protective function against salt spray near the ocean, and recovery and storage of heat returned to the grapes during the night.

"Basalto", "Lajido" and "Terras de Lava" are designations of Pico wines that refer to a human-nature relationship that the islanders are honored. The wine cooperative of Pico Island, to Areia Larga, focused the local production, which adopted new varieties, and can be visited. 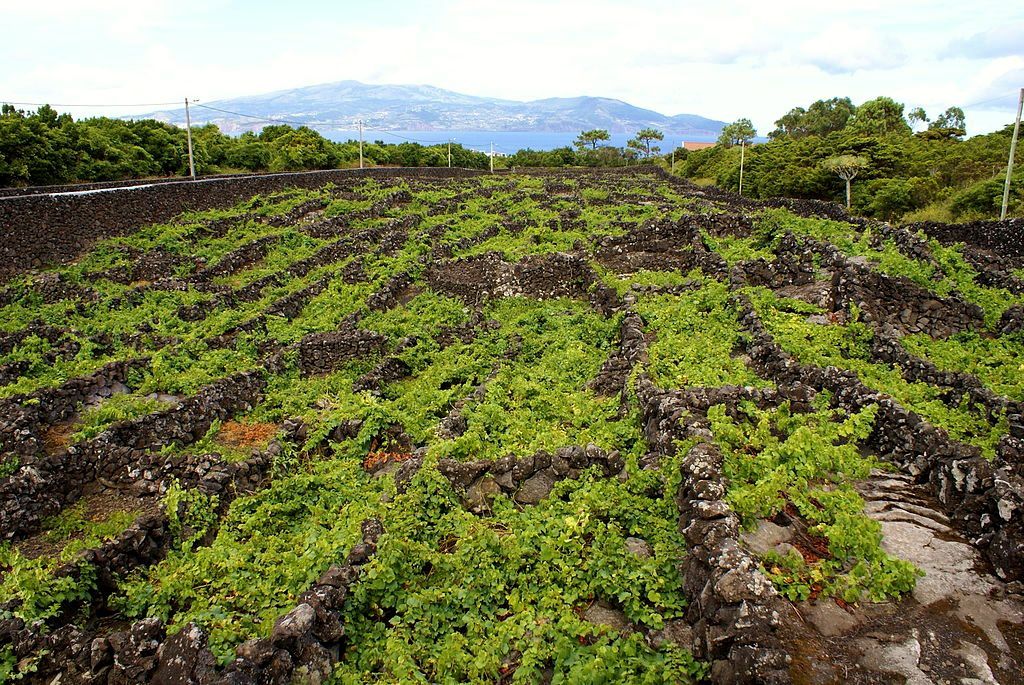