When the weather seems to settle in the north, for some reason I think of the Azores !

Geodiversity of the Azorean archipelago is the result of the installation of the geotectonic micro-plate that supports, at the point of the Azores triple junction between the North American, Eurasian and African plates. 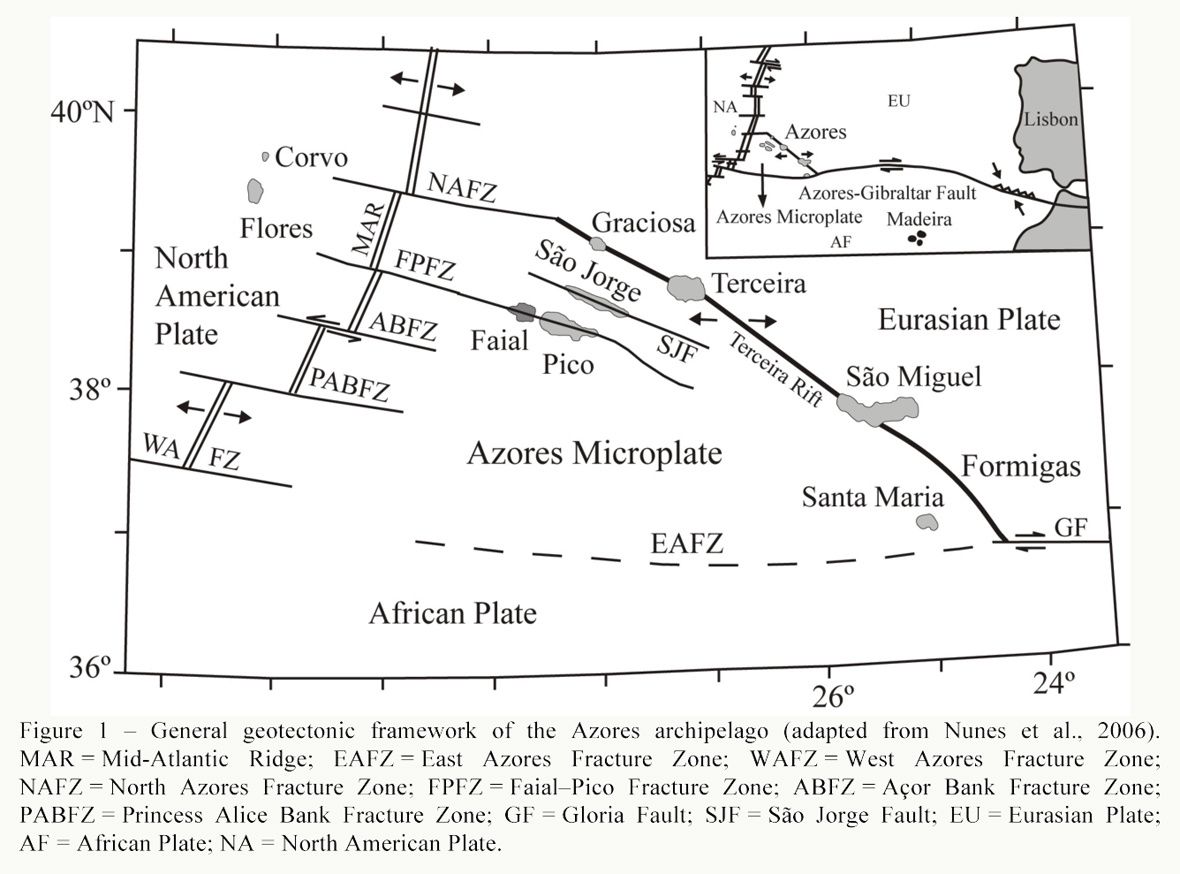 In this context, the most southerly island of the archipelago, Santa Maria, has a special place:
- It has indeed the oldest of the group of islands rocks.
- Many outcrops of sedimentary rocks, including limestone, conglomerates and sandstones, characterized by the presence of many fossils are another feature.
- It is also the only island where you can see large outcrops of pillow lavas, in addition to various volcanic structures, some of which are part of geosite classified Azores. Tectonics of the micro-plate of the Azores:

The raised floor of the Azores plateau is interpreted as being the result of the interaction between a mantle plume (Azores hot spot) and the MAR / Mid Atlantic Ridge, which took place there 85 million years. This interaction has migrated northward along the axis fault following the movements of the African plate to the SSE in a direction roughly parallel to the axis of March

The formation of the plateau of Azores have started there 20 Ma, to finalize there 7 Ma.
The entire plateau, after the decrease in volcanic activity has been affected by the rifting of the Mid-Atlantic Ridge.

The case of Santa Maria:

The oldest island of the archipelago, with formations dated 8.12 Ma, is characterized by a basaltic substrate, deformed by a series of NW-SE oriented fractures.

The presence of limestone and fossil deposits associated with marine formations, show a surtseyan past activity, and periods of flooding before the final output above sea level.

The soils of the western region mainly consist of red clay, the result of an alteration of pyroclastic deposits in hot and humid climate of Paleocene, when the sea level was 100 meters lower than the current level. We find these pillow lavas, at an altitude of 180 meters above present sea level; they are responsible for the expansion of the island to its current size. Return below the sea level has resulted in a period of subaerial volcanism between 5 and 3 Ma.

Two main areas of different morphology can be distinguished:
Dry clay plain occupies two-thirds west of Santa Maria. The impermeability of the soil makes the arid region.
The eastern third consists of eroded hills and mountains, interspersed with valleys, and covered up by a thick vegetation or pasture. Highlights are the Pico Alto, with 590 m, Cavacas with 491 m, and Caldeira, with 481 m. This region is more humid, with strong winds, precipitation and fog, promoting vegetation rich in endemic.

The coasts are lined with cliffs, the highest of which are 340 m, Rocha Alta. They are interspersed with bays and sandy beaches protected or guarded by rocky islets. Tomorrow, the site of Ribeira do Maloás.

-  " Interaction between the Mid Atlantic ridge and the Azores hot spot during the last 85 Myr. Emplacement and rifting of the hot spot-derived plateaus " par P.Gente & al. - CNRS 2003 in G³ electronic journal of the earth science.