Azores - Terceira - 1 - the center and south of the island.

A low-relief plateau dominates the eastern part of the island. The central area is characterized by low and large crater of Caldeira Guilherme Moniz and all elevations of the Serra do Labaçal, which has its highest peak Pico Alto (808 m). To the west, takes place on the vast crater of the Serra de Santa Bárbara, where the highest peak of the island (1,021 m) mountain system. Terceira / Azores - the port and the city of Angra do Heroismo, dominated by the cone of Monte Brasil - photo travelpost.noble-caledonia.co.uk

Santa Barbara, the latter, the younger, included a complex caldera filled with trachytic lava domes. On the outer slopes, these domes have the appearance of large masses extended by flows channeled into spectacular lifted.

The presence of a graben in the northeast of Terceira, which amended the slopes of a large stratovolcano, belongs to the WNW-ESE tectonic features of the Mid-Atlantic Ridge at the latitude of the Azores. The evolution of the archipelago will go through an analysis of the geomorphology diving. 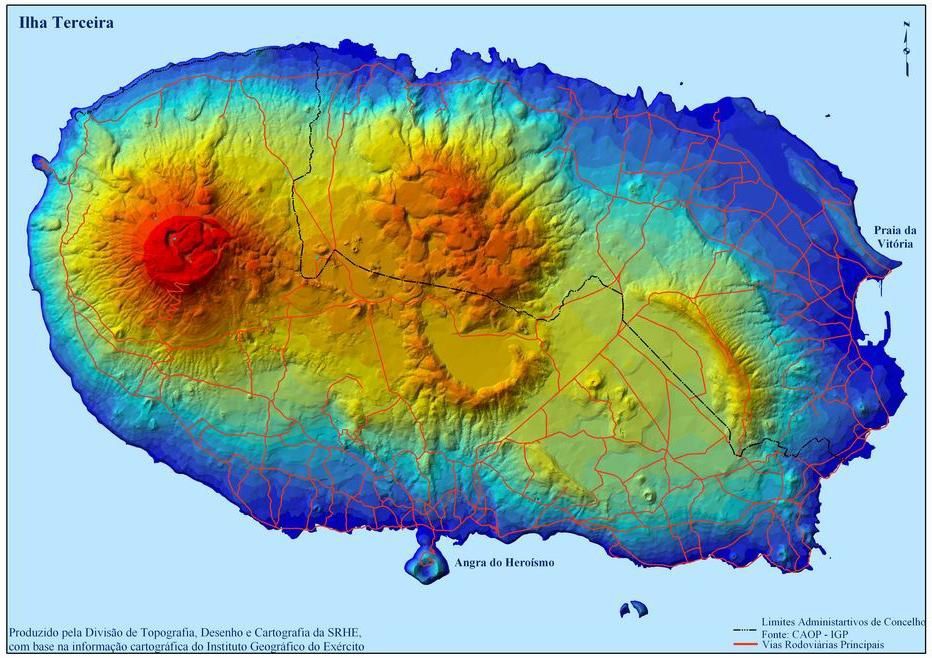 The center of Terceira

Guilherme Moniz caldera forms a depression 4,300 meters on 2,300 m, dated 23,000 years, which is filled with pyroclastic and recent lava flows, such as those issued by the cinder cone Algar do Carvão.

This cone, 629 meters high, has the distinction of having the chemney of its crater remained open to a depth of 80 meters, hole in the bottom of which a lake of 400 sqm built. It can be accessed through the arrangements made ​​by cavers of Terceira: an artificial lateral tunnel avoids the vertical well, and gives access to a room where the ceiling is composed of andesitic rocks. Infiltration waters crossed the dross of the outer cone by undertaking elements and form white stalactites fifty cm., and spread and massive stalagmites of amorphous silicic kind. 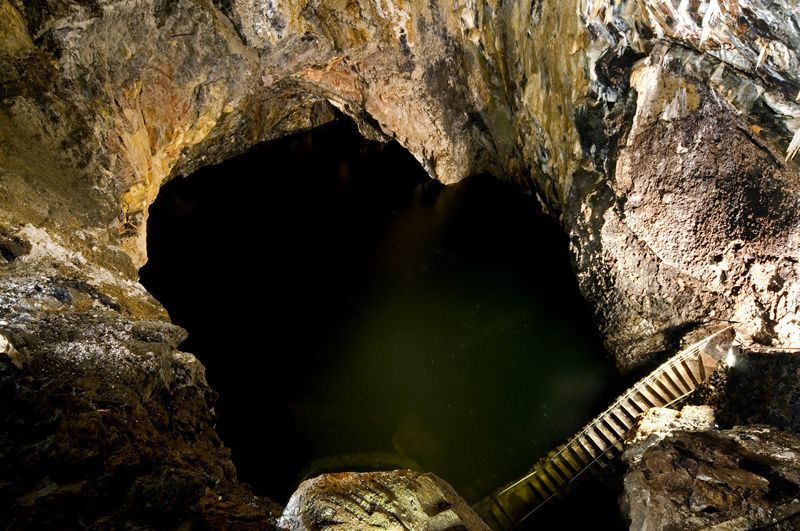 Southwest of the volcanic complex of north-central, we see a set of domes-flows and Strombolian cones, one of them has at its top a depression 100 meters in diameter, called Furnas do Enxofre: fifteen mouths emit hot sulphurous vapor that keep rocks at 80-100 ° C. Various vents, sulfur was deposited on needles 1 to 5 cm in length. These are the only witnesses of the latent present volcanism on Terceira. Pico Alto is a polygenetic volcano with a young caldera, almost completely filled by domes and flows, including Biscoito Rachado and Biscoito da Ferraria. A new high temperature geothermal area, measured between 200 and 230 ° C; was discovered in the area in 2004 following an exploration program and drilling by GeoTerceira. South, Monte Brasil is a good example of a peninsular cone. This Surtseyan tuff cone  result of a basaltic underwater eruption ; with its largest diameter of 1.500 m and height of 205 m the highest point, there is an element of Angra do Heroismo site, which established its port behind this natural shelter. An isthmus, corresponding to an old cast down from the center of Terceira, then covered with different levels of projection, connects it to the island.

Silveira Bay, west of Monte Brasil, lets observe a succession linked to its history; down, the andesitic complex massif of the Serra da Ribeirinha and trachytes of the side of the Serra do Moriao followed basalts forming the core of the peninsula joining the Monte Brasil to the body of Terceira (visible under the castle 17th century). Thick ash levels trachytic, yellow color come after, covered with dark gray basalt tuffs of Monte Brasil, which include ankaramites, torn from deep bedrock of the island. Near Angra, Pico do Gaspar is a Strombolian cone, resulting from a secondary eruption of the Serra de Santa Barbara, dated in the year 1200. His form in "nest" and the steeply inclined slopes are characteristic of a basaltic scoria cone consolidated. 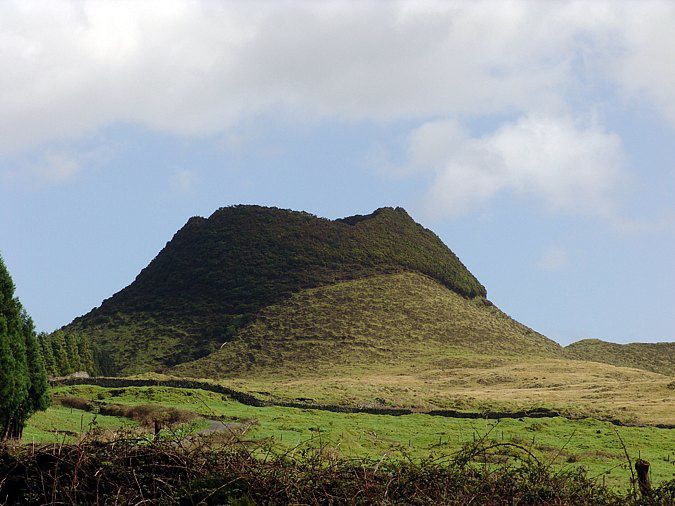 Tomorrow, the west of the island and the last eruption.