Chronicle of an Icelandic weekend - the Reykjanes peninsula - 3 - Mýrdalsjökull.

In the early morning, sunrise on the glacier Mýrdalsjökull lets hope a beautiful clear weather that will allow a good observation of the eclipse.

Our base is ideally located between the foot of the glacier and Vik, to the Grand Guesthouse Garðakot ... a place to stay that I recommend.

This small farm built in 1931 and enlarged in 1961, was inhabited by unmarried brothers Óskar and Guðjón Þorsteinsson. In 2012, it was completely renovated by the friendly owners, Eva and Vigfús, into a welcoming guest house.

The Grand Guesthouse Garðakot, our "base camp" - photo © 2015 Bernard Duyck The Grand Guesthouse Garðakot, our "base camp" - photo © 2015 Bernard Duyck

Mýrdalsjökull, the "Glacier of the Marsh's Valley", is the fourth largest glacier in the country; it measures 596 km². Its highest point is the icy dome Góðabunga, which overlooks the valley of Thórsmörk, mentioned in the eruption of April 2010. The ice caps of Mýrdalsjökull and its neighbor to the west, Eyjafjallajökull, are in effect separated by a band of one to two kilometers, the Fimmvörðuháls pass. Mýrdalsjökull, its caldera, his outlet glaciers and its neighbor, Eyjafjallajökull - Doc. IES

On calm appearance in the soft morning light, the glacier has several volcanic edifices, including the fearsome Katla volcano. The latter has a caldera of about 110 km², covered with a layer of ice of 400 meters thick. Its eruptions follow one another at a rate of one every 40-80 years. His last confirmed eruption date from 1918 .

Eruptions are generally confined to the caldera, subglacial and result in meltwater outbursts, the "jökulhlaups", creating a sandur, the Myrdalssandur. In the 2000s, many earthquakes were recorded in the caldera. 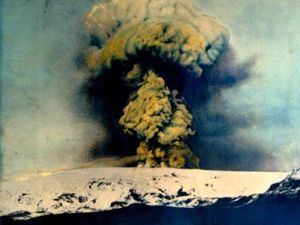 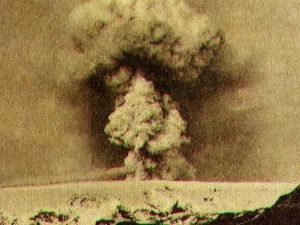 The eruption of Katla in 1918 - Photo archive

The volcanic system of the Mýrdalsjökull is associated with the crack of Eldgjá, stretching over almost 70 kilometers. It erupted in AD 934, and has produced voluminous lava flows, about 18 cubic kilometers, ranging up to the edge of the ocean. This lava field, the Alftavershraun, that we cross on the way to the east, is covered by shave foams. The Alftavershraun : the lava field of the crack of Eldgjá - photo © Jean-Michel Mestdagh In a 4°article, Vik and its surroundings.