Fjaðrárgljúfur: a canyon in the palagonite. - Photo © 2015 Bernard Duyck

Two interesting sites in the Katla Geopark: Fjaðrárgljúfur and Kirkjugólf

Fjaðrárgljúfur canyon was formed 9,000 years ago at the end of the Ice Age. The withdrawal of an upstream glacier gave birth to a glacial lake, due to the presence of a rock bolt predominantly of palagonite dating from 2 Ma; its level rose until the water overcomes it and starts his erosion work... a winding canyon, along about 2 km, and deep in places of one hundred meters, was dug by the river Fjaðrá in rocks and palagonite (*).

(*): The palagonite is a mixture of minerals produced by the alteration, in interaction with water, of the glassy volcanic materials. Color, usually yellowish to brownish, can vary from green to gray. Clays and zeolites are the key components of palagonite. The village of Kirkjubaejarklaustur, close to the previous site, is best known for the "Fire Sermon", Eldmessu, delivered on July 20, 1783 by the Pastor Jón Steingrímsson, supposed to have stopped the lava spills of the fissure eruption of Laki, and spared village. A modern church was built in 1974 in memory of the pastor. On the left, the Rev. Jon Steingrimsson - photo of the film "Cloudkill 1783" - right, the new church of Kirkjubaejarklaustur, built in 1974 - photo klaustur.is

Near the village, in a marshy pasture, Kirkjugólf, a poygonal arrangement of 80 m², considered by the Vikings as "the paving of a church" is in facts the top of basaltic organs, eroded by glaciers and sea when they were on the south coast of Iceland, there are several thousands of years. Kirkjugólf: the basalt columns in their environment - photo © 2015 Bernard Duyck 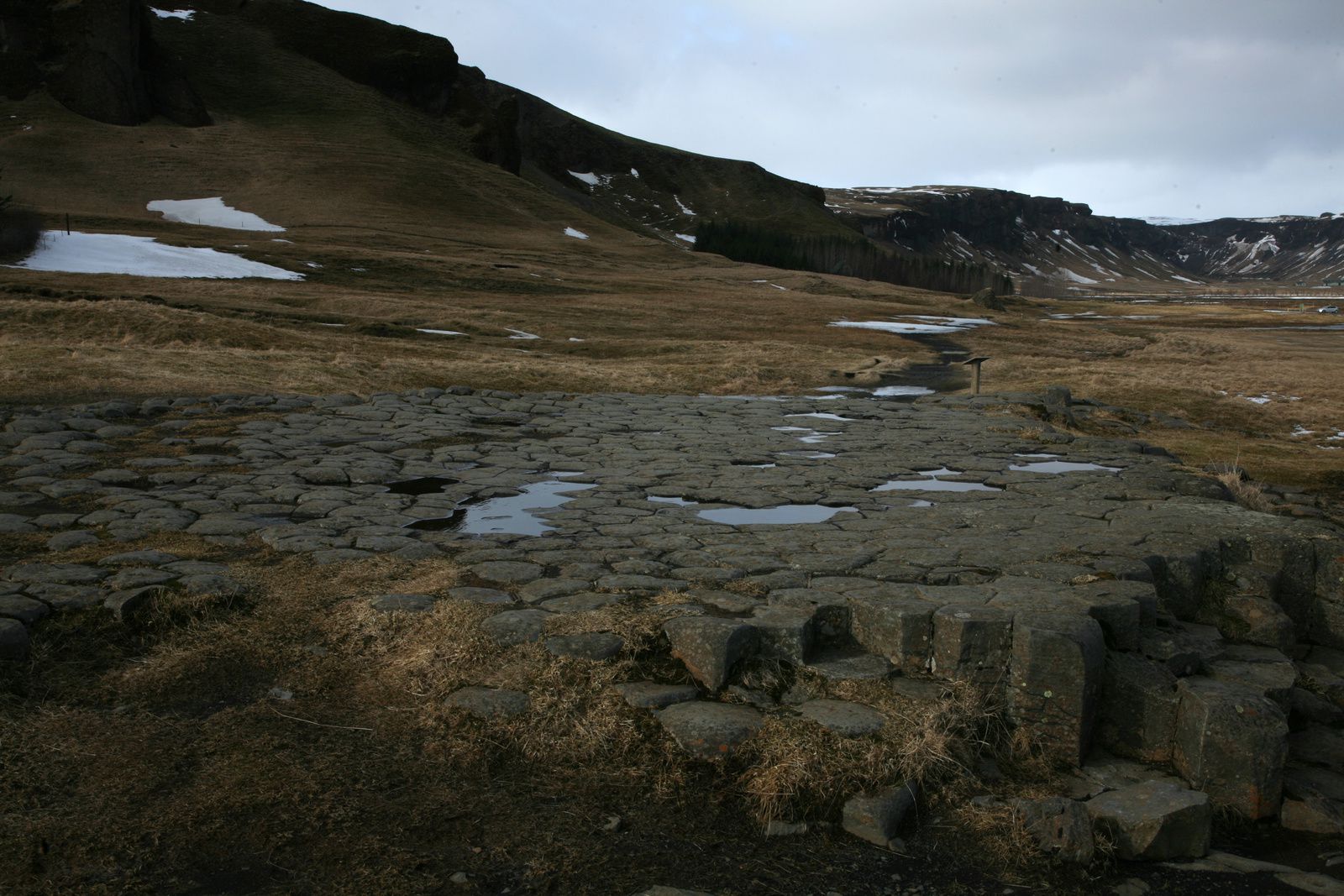 To get there, you pass the Hildishaugur, "the hill of Hildir."

In the Landnáma, the book of Colonization, a medieval Icelandic manuscript, it is said that the Irish hermits lived in Kirkjubær before the Scandinavian settlement of Iceland. According to tradition, on the territory inhabited by Christians, pagans were considered unwelcome. Hildir Eynsteinsson of Meðalland, a pagan, tried to get through. When he stepped on the field, he fell dead and was buried in the hill that bears his name, a stack of rock blocks.