Ads of West Hawaii Today reports that Christina Neal was chosen as New Scientist in charge of the HVO / USGeological Survey's Hawaiian Volcano Observatory. She took office on Sunday, World Day for Women's Rights, and succeeds Jim Kauahikua, who held the post for ten years. This is the second woman to lead the HVO in 103 years.

On the left, Tina Neal on the ground at the Okmok volcano - right, official photo as New Scientist in charge of the HVO in 2015 - Click here to see the entire photo. On the left, Tina Neal on the ground at the Okmok volcano - right, official photo as New Scientist in charge of the HVO in 2015 - Click here to see the entire photo.

She knows well the Observatory in Hawaii, having worked there between 1983 and 1989, and Kilauea and Mauna Loa volcanoes. She participated in the monitoring of Kilauea in the early days of the eruption on the East Rift Zone, as well as the eruption of Mauna Loa in 1984.

In 1998, she held the position of first USGS advised the Office of Foreign Disaster Assistance, responsible for the coordination of US responses to disasters abroad, before returning to the AVO in 2000, where she resumes his geologist position while keeping specific missions to the HVO. In this photo of ISS042-E-281151 / 18.02.2015, the VOG (fog composed of gas and fine particles and droplets of acids aerosols, created by interaction between sulfur dioxide, other gases and sunlight, air, moisture and dust / HVO) is carried on more than one hundred kilometers and forms von Kármán vortex.

A study in Earth and Planetary Science letters of March 2015 provides details about the Kilauea plumbing system, based on lead isotope analysis in lavas from the top.

The summit magmatic reservoir of Kilauea has two magmatic bodies, at least since 1971:  ratio Pb206/ Pb204 in lavas of Halama'uma'u indicates that eruptions since 1971 have been fueled by a magma chamber between 2 and 4 km below the southern edge of the caldera of Kilauea, and another shallower reservoir, located less than 2 km. under the edge of the pit crater of Halema'uma'u.

This surface reservoir would have held only ~0.1-0.5 km3 of magma during the late 20th century ... which means that large eruptions of Kilauea, like the current one (which has issued more than 4 cubic kilometers of magma) must therefore be supported by a substantially continuous supply of molten material from the mantle.

The proposed model shows at least four magmas from the mantle, of distinct compositions, were issued by the Kilauea since 1959. This means that the eruptive behavior of Kilauea is partially related to the delivery of new magma batches from the source region of the volcano in the Hawaiian mantle plume. 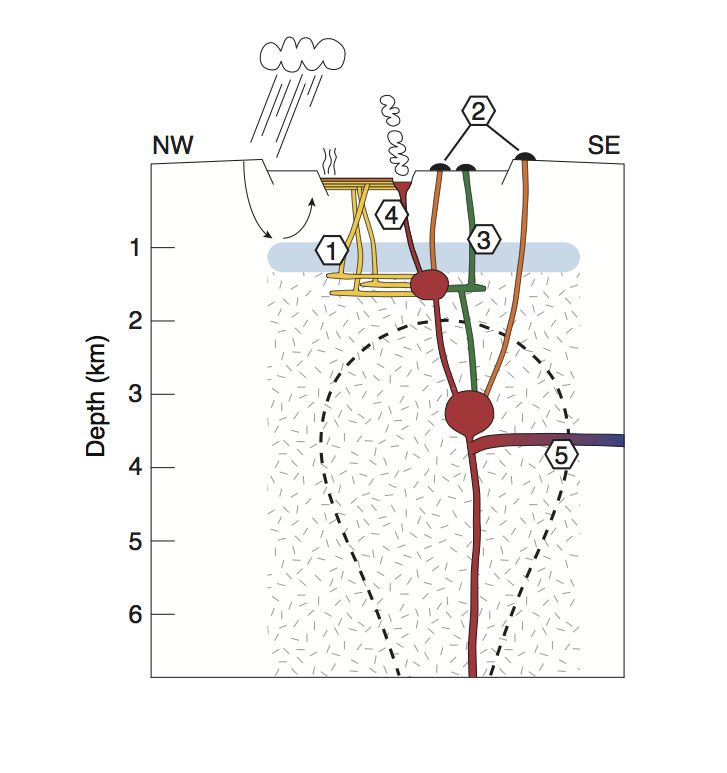 Plumbing Cross section of Kilauea / below the summit caldera of Kilauea, with the lava lake in Halema'uma'u crater (4) - Credit: Aaron Pietruzska - EPSL Pietruszka however note that separate geophysical measurements suggest the size of the magma chamber largest ... signifying the presence of a greater amount of molten rock indicated by chemical analysis. But many researchers now believe that in the volcanic reservoirs, like those in Kilauea, the rock is more like a melted mixture (a slushy porridge), a mixture of hot crystals surrounded by magma.

Pietruszka concluded with a quip: "geochemists consider the fluid part of the system, while geophysicists longer see the movements of magma and the hot and deformable crystals".