In Oregon, lakes disappear into holes !

The volcanic landscapes of Oregon and the Cascades range are characterized by specific structures including holes that drain the lakes.

One of them, aptly named Lost Lake, is located off Highway 20, close to the winter sports resort of Hoodoo, in the forest of Willamette. (NB: different lakes are in the United States the name of Lost Lake) Every winter, the lake fills fed by meltwater and small rivers, before emptying slowly into a hole to dry, before giving way to a meadow. Everything is about balance between supply and drainage: it fills when intake exceeds drainage, and vice versa.

It is not known if the waters flowing into the hole are transported to an exit point, or if they seep into porous medium under the surface, to go recharging the great water table that feeds the springs located on each side of the Cascades .

This hole is there forever, according to the spokesman of the Willamette National Forest ... it's actually the skylight of a lava tunnel.

Near Hoodoo, various volcanic formations could be responsible for one of these lava flows channeled:

- Hodoo Butte, a cinder cone that covers the western edge of Hayrick Butte.

- Hayrick Butte is a tuya, or a subglacial volcano, adjacent to the first named. It is characterized by a flat summit plateau, triangular of 800 meter maximum length, and near vertical walls of 210 meters. Hoodoo Butte, after a forest fire in September - photo Rvannatta 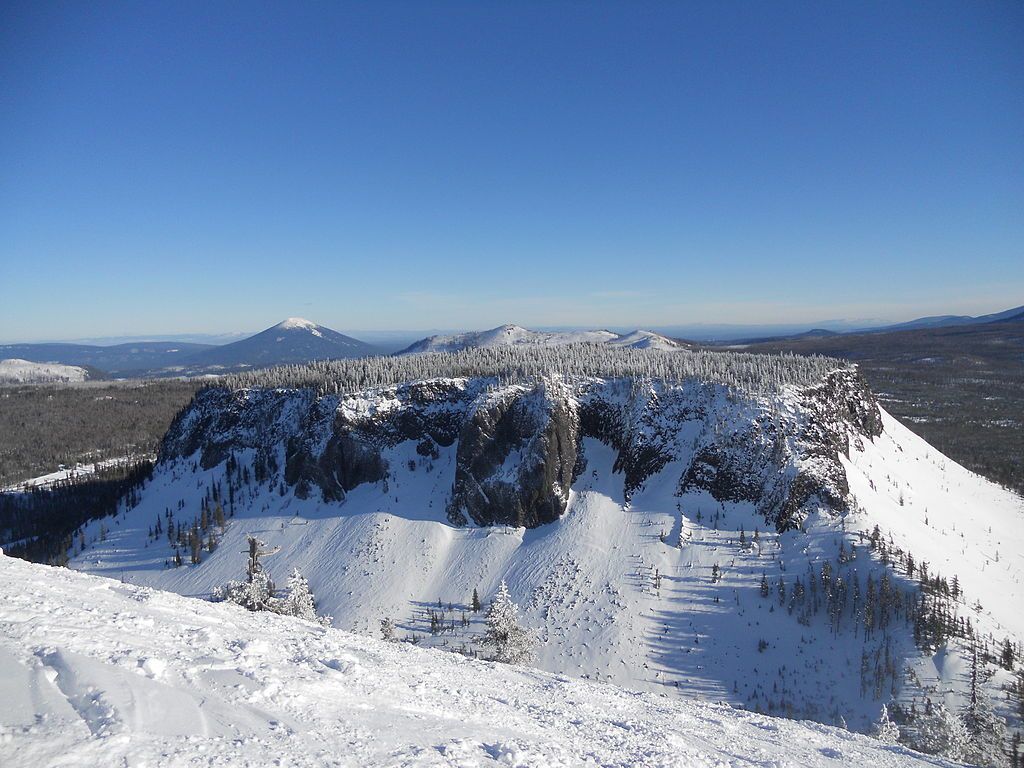 Several kilometers west of Lost lake, similar drainage holes exist at Fish Lake, at the junction of Highway 20 and Highway 126.

The Fish Lake also knows her seasonal cycles. It is located between two volcanoes: Mount McLoughlin north and Brown Mountain to the south. Brown Mountain is responsible of flows of basalto-andesitic lava, 2,000 years old, around the southern shore of Fish Lake.

The Mount McLoughlin is a cone with steep walls built on top of a shield volcano. The volcano appears there are less than 700 000 years. Three steps characterize its eruptive activity. The first is characterized by an explosive period that forms a volcanic cone whose remarkable heights approaching 900 meters. The presence of an ancestral shield inder the cone could explain this anomaly. During the second stage, around 200 000 years BP, of andesitic lava flows are emitted from the top of the cone and bury it. The third stage is characterized by viscous andesitic emissions from near the summit, as evidenced by the old eruptive vents of North and South Squaw Tip on the western side, and most fluid lava from the base of the volcano, mainly south . The most recent lava flows are dated between 25 and 30 thousand years; they are contemporary with the last glaciation.