Kamchatka - the Kronotsky Reserve: the Bolshoi Semiachik complex and the Gamchen group .

Topography of the caldera of Bolshoi Semiachik , and his numerous volcanoes and domes

Both ends , north and south of the Kronotsky Reserve, are little illustrated.

Located south of the Kronotsky Reserve, the Bolshoi Semiachik Volcanic complex has been built in a large caldera 10 km wide , closed west side, and occupying a volcano- tectonic depression, dated from the late Pleistocene, along the Pacific coast Kamchatka .

The post- caldera volcanism includes lava domes , including Ivanov, the Ezh and Korona , and many stratovolcanoes , certain assets of the Holocene : the volcanoes Zubchatka ( Bolshoi Semiachik ) Zapadny Barany , Vostochny Barany , Zentralny Semiachik , Popkov , Plosky and Burlyashchy are the most important of the complex.

The dating of the dome Ivanov was not easy to establish. He did not produce lava flows and is not covered by layer of ash ... however we found a well near the dome, which was identified in, a layer of pumice lapilli andesitic , caught between the tephra of Karymsky - dated 5900 BC - and a layer of ash called "Lower yellow ash" - dated 7500 BC. This allows us to date the dome Ivanov between 6500 and 7000 BC .

Domes Ezh ( Hedgehog ) and Korona (Crown) were produced long lava flows and associated lahars , which allows them dating : to 3600 BC , according to a tehra,marker of the eruption of Avachinsky . The complex has a hydrothermal activity , especially located on the western slopes of the Bolshoi Semiachik and Zentralny Semiachik .

The eastern part of the thermal field Burlyashchy include steam jets , with temperatures up to over 137 ° C. The thermal field of the central Semiachik home the Chernoe lake, a lake emitting vapors. 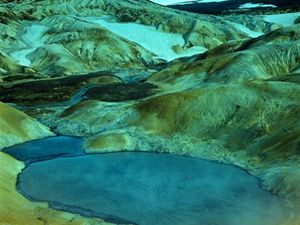 North of Kronotsky Reserve, the Gamchen Volcanic Group forms a volcanic chain oriented North - South , with the massive Gamchen and the cone Barany , the Komarov , and the Vysoky .

Volcanic Group Gamchen : From left to right: the four summits of the volcano Gamchen , the yellowish summit of Komarov , composed of hydrothermally altered rocks , and to the extreme right, Vysoky volcano. - Photo Philip Kyle / KSCNET

The massive of Gamchen is a complex of four stratovolcanoes, surmounting a shield. The Severny Gamchen and Yuzhny Gamchen are two eroded Pleistocene stratovolcano . The Molodoi is a small stratovolcano located on the eastern flank of Severny Gamchen . The Barany is located on the south-eastern flank of Yuzhny Gamchen ; wearing a crater of youthful appearance , 500 m.on 200 , its eruptions , dated 1650 and 550 BC , produced a lava field extending NE and E . A young lava dome , the Lukovitsa , formed on the sidewall of Barany , at the end of the period of activity .

Collapses of the complex at the beginning of the Holocene and deposits of debris avalanches formed a field with an hummock topography on the east side of the volcano, called "Moon hills" . 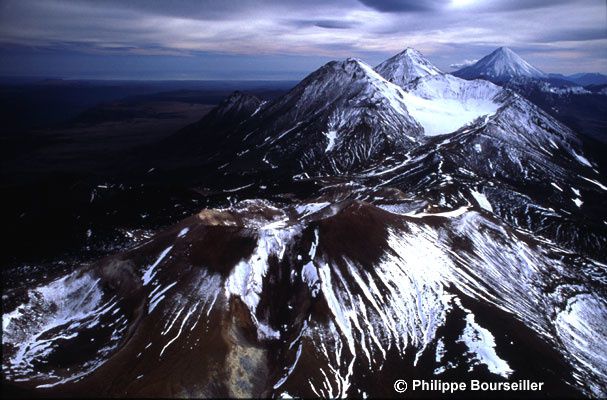 In the foreground, the Komarov , followed by summits Gamchen - and at the bottom , right, the silhouette of Kronotsky - KSCNET / Photo Philippe Bourseiller / GVP The Komarov complex (or Komarova ) is surmounted by an eccentric caldera 4 km on 2.5 . The Vysoky and the Komarov has the same magmatic system, producing an andesite of same composition , and different from that of the volcano Gamchen .

The young cone Komarov , 2070 m high , was built at the western end of the caldera ; he wears  two craters , one on top and one on the upper East side . All the summit region is subjected to extensive hydrothermal alteration , and retains active fumarole , as found on the side N and S.

The Vysoky further north , has been active since the early Holocene until the beginning of our era , while the Komarov began to form there 1500 years. , after stopping activity of Vysoky . Bizarrely , the Vysoky is not included on any list of active volcano. The Vysoky was active until the beginning of our era , with the lava flow dated 2000 years ago - photo Vera Ponomareva / KSCNET