NOAA and the University of New Hampshire will perform a mapping expedition of the  Mendocino ridge, off the Pacific coast of California, between September 23 and October 12.

Obtaining detailed framework should contribute to a better understanding of the geological processes at an active plate boundary. The North American, the Pacific and the Gorda plates - the Mendocino Ridge in the white box - Doc. NOAA / CCOM 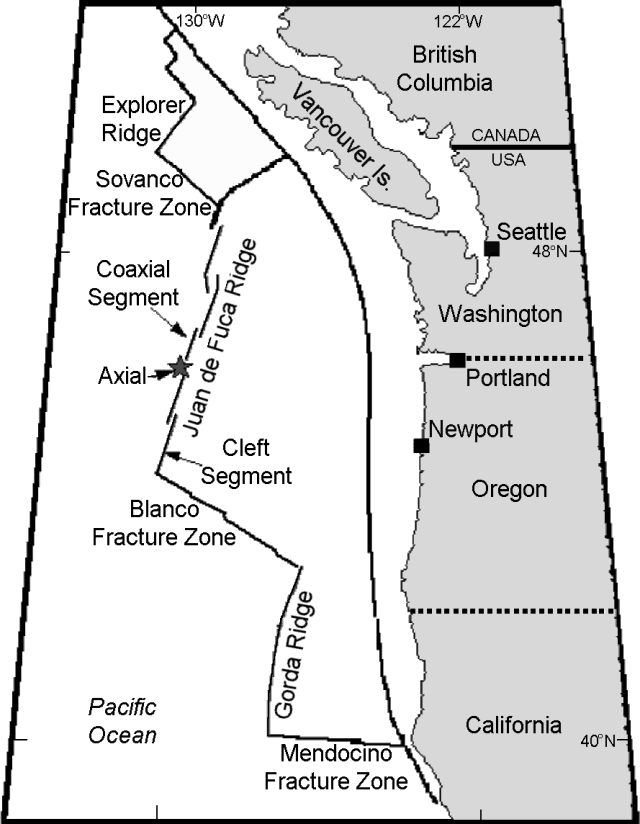 The North American, Pacific and Gorda plates, with the direction and the speed of the movement - Doc.GVP Portion of the dorsal Mendicino, with volcanoes whose status is not yet known - Doc. NOAA ocean explorer Mendocino ridge - 3D view of the southwest side of a submarine unnamed volcano - Doc. Center for Coastal and Ocean Mapping. - NOAA

The research vessel Atlantis, from the Woods Hole Oceanographic Institution, discovered around  the ridge an area rich in small volcanoes and mounds (smaller than Seamont structure, and between 500 and 1,000 meters).

Among these mounds, the bathymetry shows a round-shaped structure like an underwater volcano, 7 km from basal diameter, having slopes estimated at 40 °, located at 400 nautical miles NW of San Francisco. She has not been named yet. Mendocino ridge - a rising gas plume from an structure in amphitheater - Image courtesy of NOAA-University of New Hampshire.

In 2009, the NOAA's ship Okeanos Explorer  revealed, north of the Mendocino ridge , a methane plume rising about 1,400 meters above a large depression in amphitheater on the ocean floor.