In the archipelago of the Carolinas included in Micronesia , the island of Pohnpei ( Pohn -ah -pay ) houses ... strange ruins remains of a megalithic architecture unparalleled !

The first human activities date back to the first or second century BC. The construction of artificial islets in shallow water ( on an atoll ) near the east coast of the island of Pohnpei started around 8-9 centuries AD. On a surface of 1500 meters on 500 , there are nearly a hundred small islands separated by canals and surrounded by an outer wall. Megalithic structures made of blocks of dark basalt shaped hexagonal prisms ( basalt columns ) , arranged in a cross like logs of a hut, were built between the 12th and 13th century, contemporary era to the temples of Angkor and Notre- Dame de Paris . These buildings over 12 meters high and 5.5 meters thick, had a political and ceremonial function at the time of the dynasty Sau Deleur , unifying the clans of Pohnpei .

According to the legend, the basalt columns used in the construction of Nan Madol were transported there by the powers of black magic ... archaeologists have located various careers on the main island , but can not define the mode of transport and construction of this structures . Map of Nan Madol , near the island Temwen / island of Pohnpei (Micronesia) Most islets had a residential function, some are specialized in food preparation , production of coconut oil or boatbuilding . Without areas of food crops or drinking water , all goods must be imported from the mainland , with a large labor force . The funeral sector , Madol Powe , contained 58 islets , with a center : the islet Nandauwas (Nan Douwas ) , identified by a wall 7.5 meters high and houses the royal necropolis . Just for this royal site , estimated using 4,500 m³ of basalt and 13,500 m³ of filling coral debris, for a total weight of 45,000 tons . 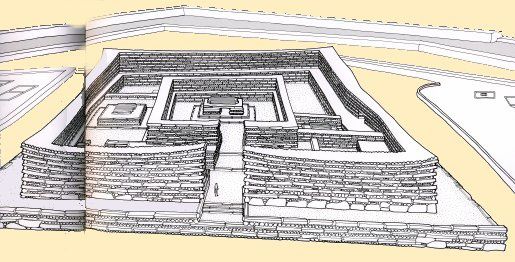 Nan Madol - Sketch of the royal tomb of Nan Dowas Nan Madol was abandoned with the arrival of the first Europeans in the early 19th century. But the decline of the Venice of the Pacific began in 1450 , with the fall of the dynasty Sau Deleur , under the advent of a different political force on Ponape , or as a result of conquest by invaders from Kosrae ... Regardless, his disappearance is correlated with the development of a very similar site on the island of Kosrae .

The ruins of Nan Madol, and of Lelu, close, are listed as World Heritage by Unesco.