North of the Columbia River, other volcanoes ...

North of the Columbia River, the Washington State has five active volcanoes, all part of the volcanic chain of the Cascades :  Mount Adams, St. Helens, Rainier, Baker and the most remote and least known of them, Glacier Peak. 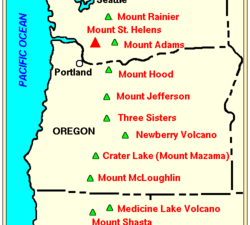 Volcanoes in the Cascade Range and tectonics - a click to enlarge - Doc. USGS

Resembling to the silhouette of Mt St. Helens prior to its "decapitation", he rises to 3213 meters and dominates the Glacier Peak Wilderness Area, forested. The volcano measure in reality only a little less than 1,000 meters, because it is built on a high ridge.

Twelve glaciers descend on its flanks, which earned him the name ... and obscuring its status of dacito-andesitic stratovolcano, even in the 1850's when native of northwest revealed to the naturalist George Gibbs that "another small peak north of Mt. Rainier had issued smoke ".

Yet since the end of the most recent ice age, the volcano produced with the St Helens, the most explosive eruptions in this part of the North American continent, in at least six separate volcanic episodes. The volcanism of Glacier Peak, like other volcanoes in the Cascade arc, is due to the subduction of the Juan de Fuca plate beneath the North American plate.

The age of the Glacier Peak volcanic cone is uncertain ... It produces large explosive eruptions that covered the surrounding areas with tephra deposits; they are accompanied by growth of lava domes, and pyroclastic flows and lahars in the direction of low areas near the volcano.

Primitive eruptive deposits have indeed been eroded by the last glaciation and buried by younger domes, aligned roughly north-south across the top of the volcano. The oldest lava flows, known to be issued from the north and east of the volcano, have been dated between 200,000 and 600,000 years ago. 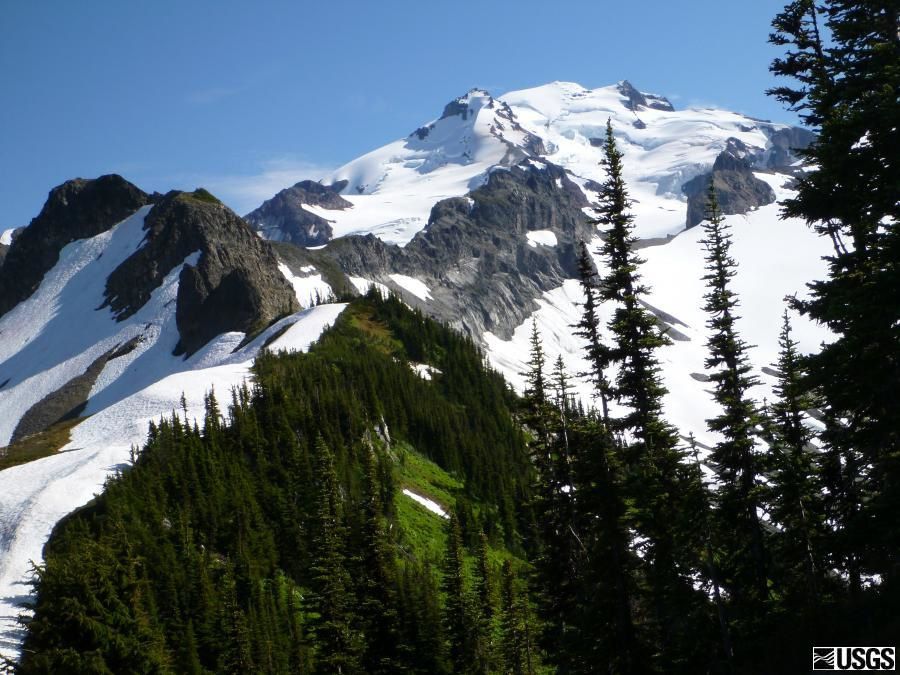 The top part of Glacier Peak can be divided into three parts, two false summits and the current summit, which is partially covered by the upper parts of  Chocolate glacier, which  leaves exposed to the west and south of a thick flow, high of fifty meters, a remnant of an eruption dome dated there 5500 years.

Further north, a small plateau containing the remains of a recent lava dome. A small dacitic lava flow extends from the center of the false summit to the top of Dusty Glacier, on the NE flank of Glacier Peak.

South of the present summit, Disappointment Peak, the dacite dome-casting, extends over 800 meters on the south-west / south side of the volcano. Its color varies from light gray to pink, and red; its high vesicularity and the presence of red-black prismatic phenocrysts of oxyhornblende distinguishes the dacite of Disappointment Peak from the other dacites of Glacier Peak. From bottom to top, glacial deposits - at the walking stick, the orange layer of ash from the eruption of Mazama (7,700 years ago) - at the top, the tephra eruptions of Glacier Peak (<7,000 years) formed by co-ignimbritic deposits from repeated pyroclastic flows - Photo Heather Bleick / USGS North-east side of Glacier Peak - Stratified deposits of pyroclatic flows and lahars, from the collapse of a dome, dated between there 5500-5100 years - Beige rocks in the foreground are deposits altered hydrothermally of the Gamma Ridge formation, filling a small caldera that preceded the modern Glacier Peak - photo Tyson Berndt / USGS