Volcanoes and men - 3 - the volcanoes, a sulfur source.

Volcanoes emit both before, during and after their eruptions of large amounts of gas, spread firstly in emissions starting from the crater, and to the other, in a diffuse degassing by fractures in the form of fumaroles, or emanation from ground.
Among these gases, sulfur gases provide the sulfur.

Used by man for making gunpowder, matches, in various industries for bleaching wool, silk or sugar, in agriculture for its disinfectant and fungicidal properties, the sulfur was first collected on volcanoes.
The sulfur is coming from volcanic fumarole rich in water vapor, carbon dioxide, hydrogen sulfide and sulfur dioxide. These fumaroles, also called solfatara (from the Italian "Solfo" = sulfur) are causing sulfur deposits.
On reaching the atmosphere, the hydrogen sulfide (H2S) reacts with oxygen to produce sulfur, which is deposited at the outlet of the cracks, and depth:
2 H2S + O2 -> 2 S + 2 H2O
It also reacts with the sulfur dioxide (SO2):
SO2 + 2 H2S -> 3 S + 2 H2O 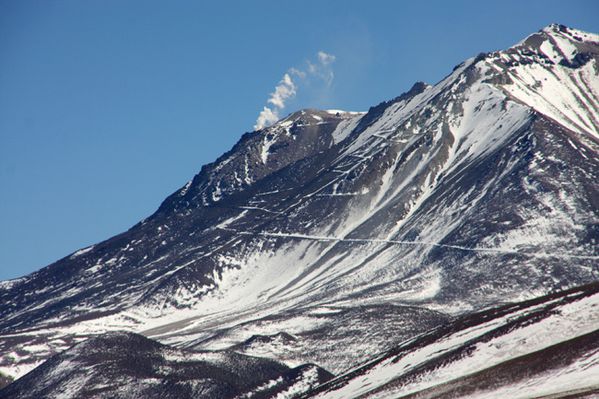 Chili - Ollagüe - operation sulfur is accessed by a winding path. Particularly difficult because of the cold and altitude, it is now abandoned - photo © JM. Mestdagh

The volcanophile will immediately made an association between sulfur and Kawah Ijen or Vulcano, but sulfur is collected craftsmen on other volcanic areas in the world: Dallol in Ethiopia, Ollagüe in Chile, White Island in New Zealand, etc ... To Dallol, some caravan-smugglers supplement their income by gleaning pieces of sulfur, they will sell at the same time as the salt. 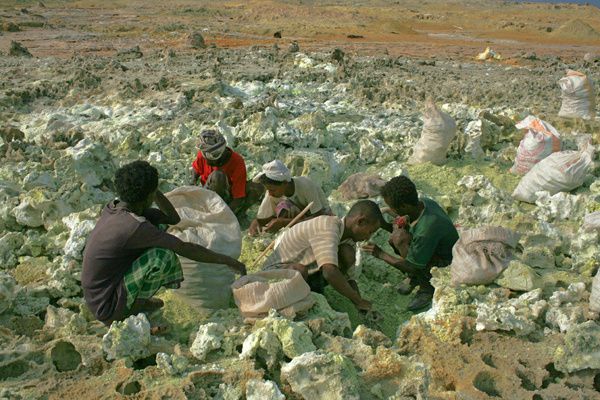 In Indonesia, to the Kawah Ijen, sulfur is a "gold mine" for local ... sulfur is paid to their weight, and these convicts out of the crater in baskets up to 80 kg. Then carry them over 4 km. to the treatment plant, at the foot of the volcano. Greed is paying a high price: the life expectancy of miners not exceeding 40 years, their body is deformed by heavy loads, their lungs ravaged by sulfur gases during unprotected extraction, and kreteks ( clove cigarettes) they smoke to remove the smell of sulfur.

Although the Kawah Ijen is one of the largest reserves of natural sulfur of volcanic origin, the old logging remains anecdotal worldwide: 99% of the sulfur used in the industry is of sedimentary origin, that is means associated with limestone in sulphates or organic matter, and lignite oil. On White Island (NZ) in 1914, a collapse of the crater wall produced a debris avalanche, that carried the buildings and ten workers of the sulfur mine, they disappeared without a trace. Only survivor of the tragedy, the cat who was rescued from the camp a few days after the tragedy by a supply boat. A new camp was established at a safer place, but the sulfur mine was abandoned in 1930 for lack of profitability. There remain only a few remnants corroded by sulfur gases.