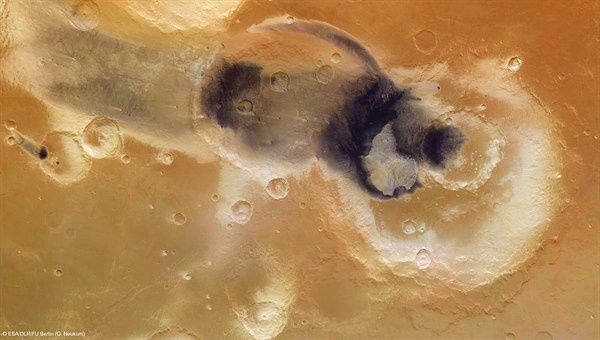 The crater Becquerel is located in the Arabia Terra region , marking the transition between Martian Highlands and the  lowlands of the north.

Becquerel crater includes a mountain of 1,000 meters high , the slopes gently tilt and flat top , made of layers of sulfur deposits. It is believed that these sediments were formed by interaction between an emerging groundwater in low-lying areas such as impact craters , and dust carried by the winds , possibly in conjunction with deposits of ash. The sequence of layers could trace the seasonal variations in climate and its changes over longer periods of time, caused by periodic variations in the axis of rotation of the planet Mars. Similar deposits are present on the Gale crater , which landed August 6, 2012 the Curiosity rover of NASA . Research carried out by the robot may improve knowledge in this field.

The sediments have been eroded over time , it is possible that all the Becquerel crater was covered by these sulfourous sediments,  disintegratable and windswept during an exhibition that lasted more than three billion years. The black areas on the images are surfaces covered with a layer of basaltic sand, probably from volcanic ash and sand fields present in various locations on Mars. Mars - Arabia dunes - one of the oldest land on Mars - anonimous impact crater located in the east of this area , exposing a field of dark sand dunes and other rocky areas . - Picture "Mars as Art " - NASA / JPL -Caltech / University of Arizona / HI -RISE .