Mexico - the volcanic islands in the Pacific - 2 . The Revillagigedo archipelago .

These islands are known for their unique ecosystem , with high endemism related to their volcanic nature and their position in relation to the continent. The dredging of the seabed and underwater photography of the region of Revillagigedo indicate that dominant rocks exposed  part of the underwater volcanoes islands Roca Partida and San Benedicto are alkaline basaltic pillow lavas. More siliceous rocks are exposed in the higher parts , subaerial of the volcanoes.

Basalts dredged at small submarine volcanoes ( seamounts ) on the Clarion fracture zone south of the Revillagigedo Islands are tholeiitic pillow basalts . These are more vesicular than the tholeiitic Hawaiian pillows collected at the same depth, and probably reflects a higher content of volatile elements . Isla San Benedicto - in the foreground, the monticulo Cineritico - follows Barcena , and Delta lavico on his right - in the background, the domes of trachyte - Panoramio photo

San Benedicto, formerly known as Santo Tomás, is an uninhabited area of ​​10 km ² island (4.8 / 2.4 km.) . The north side of the island has a series of trachytic lava domes , dated Pleistocene . South side , the highest summit, Barcena crater, rises to 332 meters , sandwiched between the remains of two ancient craters , the crater Herrera , a remnant of a large pyroclastic volcano eroded by the ocean, and the Monticulo Cineritico, to the south west.

The cinder cone Barcena has a base of 700 meters in diameter. It was the seat of the first historically pumice eruption recorded in the east Pacific in 1952/1953 . Volcan Barcena - in the center of the crater, a black lava dome - Delta lavico and his exit point in the lower part of the cinder cone - Photo A.Richards 1955

The history of Barcena begins August 1, 1952 to the vent El Boqueron . The eruption began with vigorous Vulcanian explosions that create base surges ( * ) recorded from a fishing boat, the M/V Challenger . Large amounts of ash and pumice fill the valley between the craters Herrera and the Monticulo Cinerítico, and quickly build a cinder cone , which reaches 300 meters on August 14. 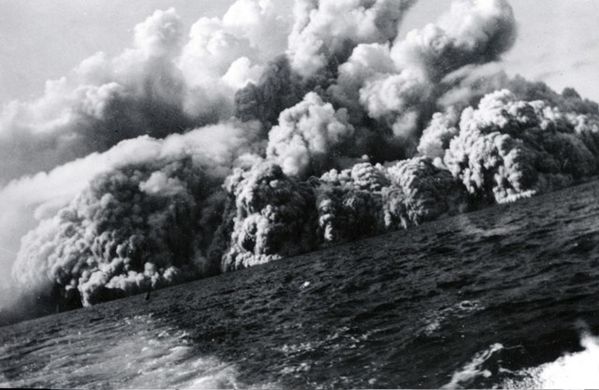 San Benedicto - 1 August 1952 - development of base surges - Photo A. Richards

After several months of lower activity , a second series of explosions is starting on November 1. The extrusion of a viscous lava dome start in the crater.

On December 8 , the lava flows out of the southeast base of the cone and began to sink into the sea ...  this activity continue until 24 February 1953 and forms a semicircular lava delta, " the Delta lavico " . On March 9, 1953, only fumaroles remain in the crater, and at the base, an hardened flow, still hot . Eruption of the Barcena - crack on the side of the cone and the Delta lavico on 11.12.1952 - Photo A.Richards
A steaming lava flow issuing from a fissure on the SE flank of Barcena volcano, in the Revillagigedo Islands west of Mexico, forms a peninsula about 300 m wide that extends about 230 m out to sea. This photo from the SE on December 11, 1952 was taken only 3 days after the beginning of lava effusion. By the time the eruption ended in February 1953 the lava delta had extended the shoreline by 700 m. Barcena - close up on the lava - Photo Carlos Ottaviano Casana

The eruption was studied by Adrian Richards, of the University of California : calculations indicate that 300 million cubic meters of tephra and lava were issued during the brief life of the volcano Barcena . Pumice from Barcena , sufficiently different to be certainly identified, were found , conveyed as a raft of pumice, to Hawaii (4,800 km), Johnston Island ( 6100 km ) and the Marshall Islands ( 8700 km in 560 days ) .

(*) Base Surge :
A pyroclastic surge is a fluid mass of turbulent gas and rock fragments ejected in a volcanic eruptions. Similar to a pyroclastic flow, it differs by a lower density , or a higher proportion of gas relative to rocks .  The name base surge was given to this phenomenon since 1965 , following an observation made by a volcanologist from the USGS and the recognition of a resemblance to the " basal surge " occurring during a nuclear explosion .

Tomorrow, the other islands of the archipelago . .