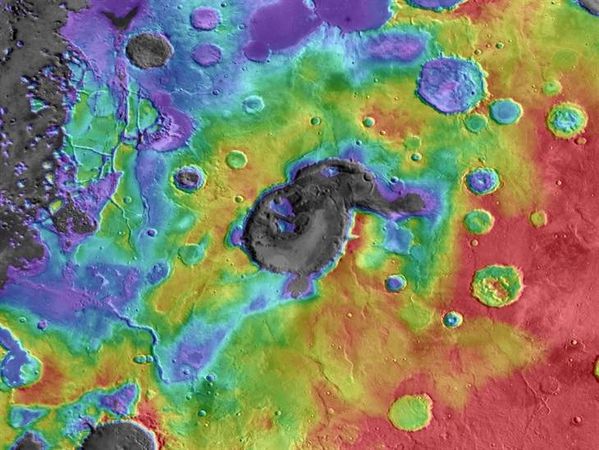 Eden patera ... the footprint of a super- volcano The geologist Joseph Michalski (Institute of Earth Sciences Tucson, USA ) and the volcanologist Jacob Bleacher (NASA Goddard Space Flight Center, USA ) submit a new hypothesis about the craters on the surface of the Red Planet, regarded up to now as impact craters ... but that could be the remains of ancient "super- volcano " active there are four billion years.

This hypothesis is linked with studies of NASA , based on measurements made by Curiosity ( 07.2013 journal Science ) that indicate a major change occurred on Mars at that time , who probably originated from volcanic eruptions of exceptional magnitude . 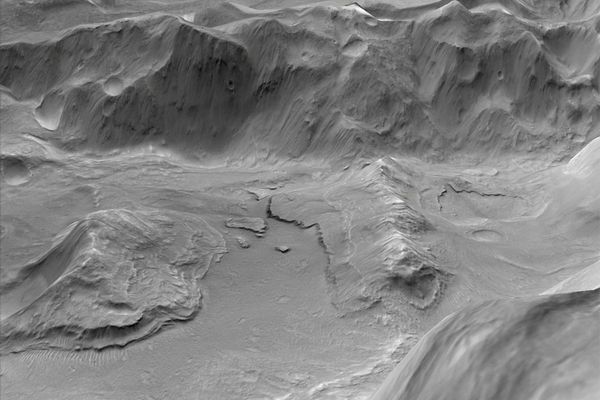 Eden patera - Photo undated by the NASA, on the possible location of a Martian super- volcano - it reports a relief " not compatible " with the assumption of a crater impact - Photo NASA / JPL / MSSS / Google

Among the craters dotting the surface of Arabia Terra , an area north of Mars , Eden patera has a depression 55 km wide, 85 km long, with a depth of 1800 meters, looking terrestrial collapse calderas consecutive to super- eruption ( Yellowstone or Toba type). The scientists describe three separate calderas in the depression, with possible traces of solidified lava lake and a volcanic vent .

These volcanoes differ from other Martian volcanoes , like the famous Olympus Mons, one of the largest volcanoes in the solar system, which has issued the lava for billions of years. The super- volcanoes of Arabia Terra could have expelled with extreme violence enough dust to cover in March of rubble in the first billion years of the Martian history. They would have been able to release huge amounts of gas , alter the climate and play an important role in the early evolution of the planet and its habitability.

Other structures are candidates for the title of super- volcano :  Euphrates patera and Siloe patera, respectively deep of 700 meters and 1750 meters. These volcanoes have produced powdery deposits identified by the NASA rovers on both landing Gale Crater and Meridiani Planum sites.

A hypothesis already " challenged " by other scientists :

This interesting theory , which sticks to certain geological features of Mars and has analogies with terrestrial volcanic structures,  is based only on qualitative decriptions . It must be corroborated by other evidence ... or thrown into oblivion . The future will tell ! Magazine Nature cover : Blast from the past - Enigmatic craters are evidence of ancien Martian supervolcanoes.