Art on the way of fire - F.Church, painter of the Cotopaxi.

This Ecuadorian stratovolcano was painted several times by Church , based on his travels in South America by the Andes mountains and volcanoes.

Frederic Edwin Church (1826-1900) was a pupil of Thomas Cole, considered as the founder of the Hudson River School , an American art movement grouping landscape painters in the aesthetic vision of romance imprint .

Inspired by the works of Alexander von Humboldt, a German naturalist and explorer who visited the American continent from 1799 to 1804, Church went to explore the magnificent scenery twice, in 1853 and 1857. Cotopaxi, described by von Humboldt as the most aesthetic volcano in the region and one of the busiest , became a favorite subject of the painter.
He made a first work in 1855 , where he portrayed a perfect cone , covered with snow and quietly dominate a tropical landscape ( above) . The volcano smoke slightly , providing a living and not aggressive note to this painting . His work from 1861 to 1862 has a different atmosphere: Cotopaxi is in violent eruption . Church takes the volcano as a demonstration of the power of nature and will intensify each characteristic to suggest a conflict between the forces of darkness and those of light . 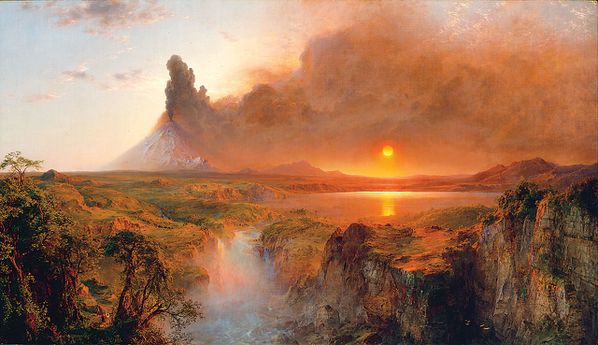 The roaring volcano, the low sun veiled by fumes ash, the large waterfall plunging into a rocky canyon whose sides reveal a tormented geological history ... all highlights incredible forces.
These are tempered by the green color of the foliage in the foreground , with the sunlight penetrating the volcanic cloud and its reflection on a lake with calm waters ... signs that this burst of energy remains under the control of a welfare benefit . The volcano is a source of destruction, but also of creation and rebirth.
The high point of view, which puts the viewer in levitation, accentuates the contrasts .

This style of landscape painting also ranked in the " Luminist " current, considered an offshoot of the Hudson River School ( between 1850 and 1870). It is characterized by attention to the effects of light, the use of aerial perspective, and concealing visible brush cops . Between 1803 and 1895 , more than thirty of these eruptions occurred , the most important in 1877, of VEI 4 , which produced devastating lahars in the adjacent valleys, destroying part of the city of Latacunga , causing many casualties there before reaching the Pacific Ocean , 270 km . east of the volcano. His last event is dated from 1940.

- The worlds of Frederic Edwin Church - By William Gerdts 2008 - link