I invite you to a review of volcano observatories and their logos - short for logotype, a graphical representation used to identify unique and immediate companies , associations, institutions , products, services , events, or any other kind of organizations to differentiate between the owner of the logotype of the other entities .

To start the series , the observatories dependent of IPGP :

The Institute of Earth Physics of Paris is a great higher education and research institution, partner of CNRS and a member of PRES Sorbonne Paris Cité . At its missions of creation and transmission of knowledge in the fields of geosciences adds an observation of natural phenomena mission. The study of natural hazards has the responsibility for oversight of the three active volcanoes in France : La Soufrière of Guadeloupe , Mount Pelee in Martinique and Piton de la Fournaise in La Reunion .

The Observatory of Guadeloupe - OVSG : Institut of Earth Physics of Paris acquired the Parnassus property in 1950 in the heights of St. Claude, at the foot of the Soufriere, in order to create the observatory. François Beauducel is the current team leader .

La Soufrière of Guadeloupe occupies the southern part of the " butterfly island " . The construction of the La Grande Découverte volcano  is dated to 200,000 years ago. A Plinian eruption , there 100,000 years , is responsible for the formation of the caldera , followed by the establishment of the volcano Carmichael . Two episodes of collapse associated with debris avalanches formed craters Carmichael and Amic, respectively 11,500 and 3,100 years ago. The current activity is linked to the dome of Amic crater and the crack system cutting the top and the upper flanks of the volcano. The last eruptions are dated 1956, to Napoleon crater ( NE side ) and from 1976 to 1977 , where a minor phreatic eruption caused the evacuation of the inhabitants of Basse-Terre and serious economic implications , the latter illustrated by the controversy between Tazieff and Allegre . The Observatory of Martinique - OVSM After the 1902 eruption , A. Lacroix built an observatory that operated until 1925. The volcano giving no signs of activity , it was decided to stop the observations four years before the great eruption of 1929-1932 ! The current observatory was built after this dramatic eruption.
Manager : Valérie Clouard . The famous Mount Pelee , which forms the northern part of the island of Martinique , has known more than 20 major eruptions in the last 5000 years . Its sides are covered with deposits of pyroclastic flows , cut with deep gullies . The summit crater of the Etang sec is  filled by two lava domes implemented during the eruptions of 1902 and 1929.

The eruption of 1902, which destroyed the city of Saint -Pierre , has become the standard model of the Pelean eruption, and marked the beginning of modern volcanological studies on the behavior of pyroclastic flows . 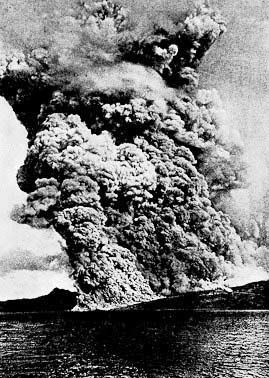 Alfred Lacroix expressed, in 1936 , the desire to install a volcano observatory for the study of Piton de la Fournaise .
Only forty years later, the outside enclosure 1977 eruption, which partially destroyed Piton Sainte Rose is getting things done .

The authorities , the Department , and the CNRS decided to build a volcano observatory and entrust its management at the Institute of Earth Physics of Paris .
The observatory is operational in late 1979. It is located in the Plain of Kaffirs , 15 km as the crow flies from the summit of the volcano , but the radio transmission data allows real-time monitoring. The current leader is Nicolas Villeneuve.

The Piton de La Fournaise , a massive shield volcano, forms the eastern part of the island of La Reunion. Its history began there more than 530,000 years is partly obscured by the eruptions of its neighbor, the Piton des Neiges . Three calderas were formed there 250,000 , 65,000 and less than 5,000 years ago, with its gradual sinking to the east. Much historical eruptions originated from the top and sides of Dolomieu who settled in the most recent caldera. Since the 17th century , there were more than 150 eruptions, which are mostly produced basaltic lava flows . Only six eruptions are from cracks on the outer flanks of the caldera since the 18th century . The last activity date in 2010 .