The geyser Papakura regenerates after 34 years of inactivity.

The Papakura geyser regenerates after 34 years of inactivity ... a first!

Known as an attraction of the Te Whakarewarewa valley, near Roturoa / NZ, the geyser Papakura had a steady and sustained activity until March 1979, with only one stop in the 30s during a very dry period . His arrest marked a turning point in the understanding of damage to the area of ​​geysers and hot springs in many wells .

In 1986, a protection zone was established to halt the gradual decline of the geothermal activity in surface. The geothermal Roturoa plan took effect in 1999 , with the maintenance of an exclusion zone of 1500 meters, centered on the Pohutu Geyser / Whakarewarewa .

Hundreds of wells were closed in the city, to the desolation of some. After the closure, signs of recovery were felt : the Kuirau Park came to life , the geyser Pohutu regained its activity ... but the rebirth of other surface structures was longer and Papakura remained dormant. 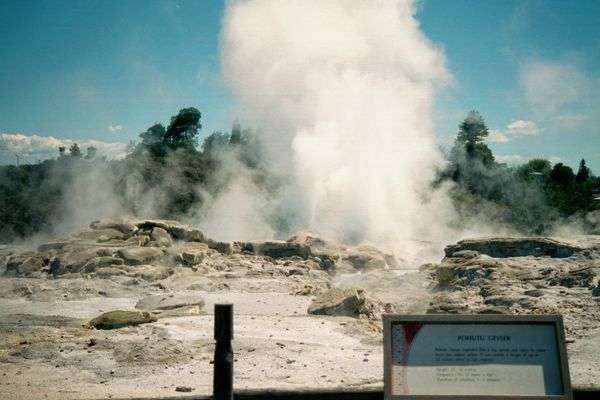 Around the geyser Papakura, nature had reclaimed its rights for several years before the Te Puia / New Zealand Maori Arts and Crafts Institute staff hands it to the open air last year. In mid- September 2013, the first stirrings of water are collected , and on  September 29 , a series of small eruptions projected water and steam to a height of one meter . This is the first time that a reaction in the field to a geothermal decline as a result. Usually when a geyser stops its eruptions , the thing is heard. What happened here suggests that there is a long latency period between changing patterns of water consumption and the response of geothermal system .

- GNS - The once-famous Waikite Geyser in Rotorua is showing signs of rejuvenation after 43 years of very little activity, scientists say. - 07.2012