Costa Rica - eruptive activity and potential of the Barva Volcano

The Barva volcano is a composite shield volcano , covering 1,500 square km and considered dormant . Consisting of two calderas , one 15 km in diameter, the other 10 km, it is dotted with craters and parasitic cones. Near the top, a 800-meter wide crater contains a lake, the laguna del Barva . With its three main peaks visible in the Central Valley , the local name is "Las Tres Marías " . This volcano is the origin of the large layer of tuff Tiribí deposited in the Central Valley , there are 322,000 years. 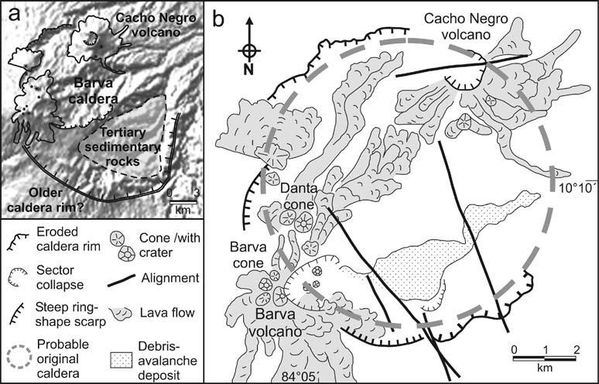 Barva - a. the two calderas of Barva - b. Caldera of Barva with the situation of recent buildings : the Cacho Negro and the top of Barva,  overlapping by places the rim of the caldera ; the western part of the caldera is strongly eroded - Map / geo.mtu.edu

This ignimbrite is the most recent, the most extensive and well exposed in central Costa Rica : it covers an area of 820 km² with a volume of 25 km³ issued . The thickness of the top layer varies between 30 and 100 meters. On a geochemical level, tuff shows a composition ranging from basaltic andesites to rhyolites , with a dominant trachyandesites . The isopach attest to the benefits of source to the caldera Barva (upper panel) .

The responsible eruption seems to have evolved from a Plinian type with extended pumice fallout towards a fountaining accompanied by pyroclastic flows .

In the southwestern part of the Central Valley , the ignimbrite flowed into a narrow canyon , which may have acted as a pseudo- barrier and thickened deposits in the central depression . The eruption of the tuff Tiribí reveals the danger posed by the Volcan Barva for the 2.4 million people living in the vicinity.

Although previous data suggest no historical activity for Laguna del Barva, and the thick forest cover does not seem to have been affected by a recent eruptive activity at Laguna Danta and other older craters, we can not rule the possibility of an eruption of low intensity during the last millennium ...
Slag present northeast of Laguna del Barva appear recent , aged about 500 years . Two kilometers north of Cerro Gongolona and to Porrosatí of Barva , hot springs exist. Norths in the foothills of Barva , at a place called Camaquire remains a residual activity , characterized by sulfur springs and hot springs. One can also observe landslides in crown down the Colonia Jesús María , with a solfataric activity and native sulfur deposits . In the ravines, with evocative local names, "La Bomba " and " Cabro ", of hot water outlets were measured at an average temperature of 60 ° C. The Barva region is largely untapped in tourism. The coverage by a primary forest, also called cloud forest , makes Braulio Carrillo National Park, a rich reserve of plants (600 species) and birds ( 515 species ), the rare Quetzal or the Volcano hummingbird, endemic to Costa Rica and Panama . Hopefully , we came across the puma and the jaguar.

- The 322 ka Tiribí Tuff: stratigraphy, geochronology and mechanisms of deposition of the largest and most recent ignimbrite in the Valle Central, Costa Rica - by Wendy Pérez . Guillermo E. Alvarado . Phillip B. Gans

- Volcano-stratigraphy and tectonics of the Western Central Valley and Montes del Aguacate along road 27, Costa Rica