VOG over Hawaii, and health hazards.

During the winter months, between Halloween and Thanksgiving holidays, breaks of the prevailing winds on Big Island / Hawaii make an increasing of the concentrations of volcanic gases and particles. This volcanic pollution from Kilauea is called VOG, a contraction of volcanic smog.
VOG components known to affect health are sulfur dioxide and fine particles called PM2 , 5 ( particles with diameters less than or equal to 2.5 microns) toxic as such ; in addition, the reaction of SO2 with oxygen and atmospheric moisture is at the base of corrosive acids rains and can pollute drinking water and damage to vegetation .

Kilauea releases large amounts of potentially dangerous gas for nearly three decades , in conjunction with the start of the activity on the east rift zone in 1983. In March 2008, these emissions have increased with the opening of a new vent in the summit crater Halama'uma'u ... then declined in 2010, and again briefly during the eruption Kamoamoa in March 2011. 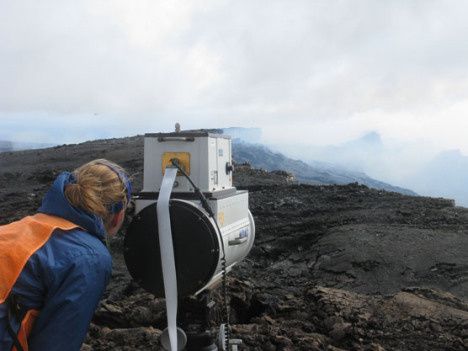 Gas measurement on Kilauea by teams of HVO / USGS

During the winter, when the Trade winds are " down " half the time , populated areas east of the island are confronted with very high concentrations of volcanic gases and fine particles, because of their proximity with the active vents. The rest of the year, the trade winds push the VOG to the southwest.

The Trade winds blowing from NE are diverted by the heights of Big island - During the "failure", winds from the SW , called Kona winds can blow in the opposite direction - USGS / Univ scheme . Hawaii

Individual response to VOG varies greatly from one individual to another, the most sensitive people are those who are suffering from chronic respiratory diseases and asthma. The short-term effects of VOG on health : respiratory problems, headaches, eye irritation and dry cough. The effects of gas / particulate mixture over the long term are being examined . Displays showing the effects of VOG on health and how to protect themselves - doc . Honolulu advertiser .

Water pollution is also a major problem in Hawaii , where many homes have a system of rainwater harvesting for domestic use. In 1988, the drinking water of nearly 40% of homes using this system of harvesting in the district of Kona were polluted by lead, leaching from roofs and drains by acid rain .

Health agencies recommend protective actions during periods of VOG : confinement inside during peak, drink plenty of water , keep the medication in hand, and keep informed on the quality of air.

The authorities have developed various tools available on line , to help the people and visitors to minimize their exposure to this volcanic pollution. EPA - U.S. Environmental Protection Agency - provides a warning table based on environnemantales education and health, evidenced by six levels of color ranging from green (good) brown ( dangerous).

Four websites are especially interesting :
-  hiso2index.info : levels of sulfur dioxide provided every 15 minutes for up to 9 locations from Hilo to Waikoloa, by the Hawaii state department of Health.
- airnow.gov : the AirNow group provides information on the current conditions in PM2,5
- hawaiiso2network.com : the National Park Service provides all the quarter-hour data on rates of gases and particles in the Hawaii National Park, more the information on the field. Map of Hawaii Volcanoes National Park on 15.11.2013 / around noon - in yellowish, the approximate direction and extent of gas plumes of Halema'uma'u and Pu'u O ' o ( in which the concentrations of sulfur dioxide and fine particles are unhealthy ) - Doc.http://www.hawaiiso2network.com/

These links can be usefully archived for a trip to Big Island.