The geysers of the Great african rift - 4 - Kenya

The Kenyan Rift Valley homes the lakes Baringo and Bogoria, lined by geysers.

Lake Baringo, located southwest of the volcanoKorosi, houses the volcano Ol Kokwe , which forms a central island in the lake with fresh water despite a lack of exit, a shallow depth and an high evaporation .
Ol Kokwe is formed of a young basaltic cinder cone above a trachytic shield. This is the smallest volcano in the north of the rift valley in Kenya. His last activity happened during the last millennium (Smith 1991). 
Hot springs, bubbling mud pools and fumaroles occur along faults northeast of the peninsula of the island. The temperature of the surface water is 81-96°C , but reaches deep 180°C. In the early 1900s, regularly  geysers came in eruption ... they are no longer observed in recent decades. The salty and alkaline lake (pH 10.5 ) Bogoria is the best place to watch geysers in Africa. Some two hundred hot springs, with a temperature between 39 and 98.5°C bordering the lake , grouped into larger entities :
- Chemerku group of 40 springs , including 4 geysers
- Sources Koibobei, to the SE, have three geysers
- Sources Losaramat, to the E, include 17 hot springs, and 3 geysers.

- The Loburu sources consist of 60 hot springs and 6 geysers. The hot springs have a high rate of carbon dioxide , another reason to vigorous bubbling thereof . All these geysers are located very low at the lake level or below. When the level of the lake changes, some geysers are flooded and stop their activity, some others come into explosion. 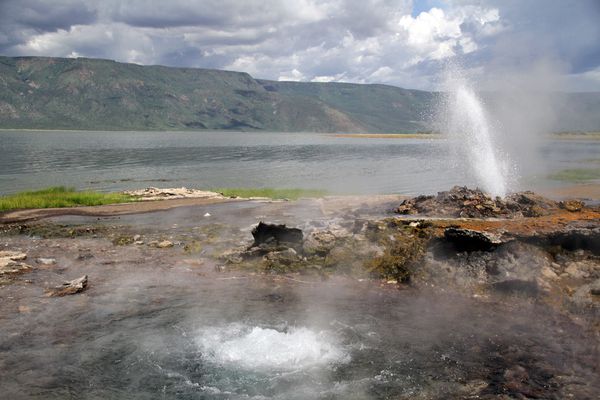 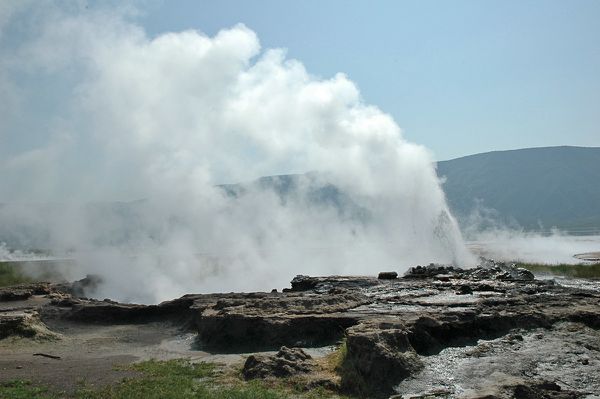 Loburu hot springs are the largest geothermal field of the Lake Bogoria . The hot springs form two groups, north and south of a small delta formed by the Loburu River on the west coast of the lake. In places , thin layers of siliceous deposits are observed, indicating an activity of geysers in the near past. 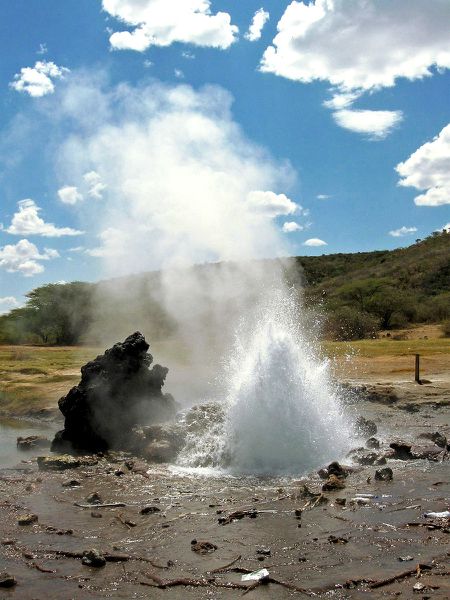 The height and the interval between eruptions of geysers differ : two examples. The KL19 group includes five geysers only a few meters away . One of them went into eruption at 3.5 m height every 5-8 minutes in 1995 ... it became less powerful afterwards. Thirty meters further north , the geyser KL30 was active at an interval of 45 minutes, amounting to 5 m. in August 2006, and in 2007 a decrease of level of the lake has removed all activity. Bogoria lake - the geysers area are frequented by flamingos that come to drink and rinse the plumage - Bogoria / httpgeoparkskenya.blogspot.be

Without output, the level of Lake Bogoria is regulated by the heat and rain. Its warm and alkaline waters form a favorable environment for various microorganisms , including the cyanobacterium Arthrospira fusiformis, which serve as food for lesser flamingos and others.

Lake Bogoria is home to the highest density of Phoeniconaias minor in the world, and nearly half of his world's population, between 500,000 and 2 million people.