In December , an article into the volcano- fiction,  more ... or too , talks of a possible eruption in the South Australian ... Without us look at these

fanciful dating forecast, one can nevertheless make a trip to the complex maars of Mt Gambier, associated with the Newer Volcanics Province in south Australia . The voluminous Newer Volcanics Province covers 15,000 km² in the south-east Australian and has nearly 400 small shields and explosion vents dated Tertiary to the Holocene. Eruptions from the late Pleistocene to the Holocene formed a series of cinder cones, maars , tuff rings and lava flows that filled the valleys. The last eruptions concern Mt Gambier and Mt Schank, there are some 5,000 years ago, when explosive activity has left maars and associated lava flows .

Mount Gambier complex consists of four maar filled by lakes : Valley Lake, Leg of Mutton Lake, Brownes lake and Blue lake .
The complex has interesting vents, representative points of gas discharge. The best known is the Devil's Punchbowl , located in town at some distance from volcanic vents .
The explosive volcanic activity of the complex is associated with mantle plume , the East Australia hotspot, currently located offshore . 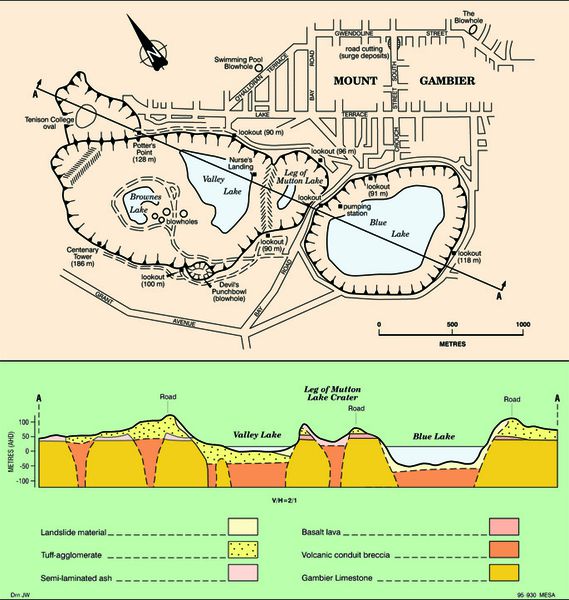 Mt Gambier complex - the blue lake in the center and Valley lake , on the left. They are included in the Mt Gambier agglomeration - photo Yvonne Claire Adams


One of these maars, the Blue lake, 70 meters deep , contains a lake, serving as a source of drinking water ( 36mm³ ) to the adjacent urban area. It changes color depending on the season : gray in winter, he take a cobalt blue color in summer, which earned him his name. Mt . Gambier - cut in the land surrounding the Blue lake and the feeding aquifer - doc . iprimus .

Two reasons for this change of color : the impact of solar lighting and water temperatures .

In summer, the high position of the sun brings more light ... an increase in the color blue , which is back-scattered by small particles (CaCO3) in the water.
The temperature of the lake increasing in spring promotes the release into the air of dissolved carbon dioxide, and increases the pH. The waters become supersaturated with calcite that precipitates capturing organic material, which clarifies the water. Each year, a new layer of calcite and organic materials, 4 mm, is deposited on the lake bottom . 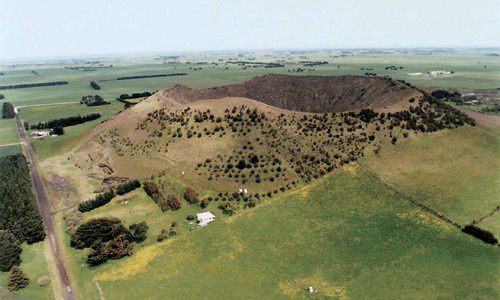 The region is also the youngest volcano complex, Mount Schank .

It is dated to 2930 ± 540 BC ( Thermoluminescence * on sands underlying 1987).
The group of Mount Schank is formed of a main north crater, 300 meters in diameter and 100 meters deep, and two small adjacent subsidiary craters. The old south crater is partially covered by the main crater . The base of the craters does not reach the level of the aquifer , so they are not occupied by lakes as in Mt Gambier . The Legend of Craitbul :
The local Aboriginal people, the Bunganditj, have seen these eruptions.
The history of the creation of these landscapes, previously transmitted orally , was recorded by Christina Smith in 1880.

The Legend of Craitbul gives us the story of a giant looking for a place to live with his family. Encamped on Mount Muirhead ... there he heard the voice of the spirit bird Bullin , he was warned of bad intentions of the demon Tennateona and fled to build a new camp (on Mount Schank ) . Again warned of the threat of the evil spirit , he moved to Berrin , where he built a new home (Mount Gambier ) . One day the water came and the fire goes out . He built new homes , but every time the water turned off . This happened four times ( the formation of the four lakes). Finally Craitbul and his family settled in a cave on the slopes of the peak Berrin ( Mt Gambier ). This legend tells over camp and home, a term that should be understood as " living space " , but also " fire place ... both volcanic and domestic ." It tells in pictorial form the various eruptions of Mt Muirhead , in the Pleistocene, and then of Mts. Gambier and Schank , as well as the formation of the crater lakes .

Phases of volcanic activity and the period of occupation by Aborigines - Doc. Office of minerals and energy resources South Australia - Volcanoes of the Mount Gambier area

Volcanoes in question are monogenic buildings, and are not affected by a future activity ... that could occur by cons in the nearby area.

Found near many karst structures , including flooded caverns and chasms, whose Umpherston Sinkhole , which will be another article.

* Glossary :
Thermoluminescence is a physical phenomenon related to the ability of certain crystals to accumulate the energy given by ionizing radiation from the radioactivity and to restore this energy as light when heated. This phenomenon is used to measure the time elapsed since the sediment has been buried by a volcano .