Etna : the twenty paroxysmal episodes of 2013.

Since the 80s , the activity of Etna is characterized by frequent   paroxysmal qualified episodes, traditionally made of three phases: a prelude and an increased level of activity, the climax itself, the decline and cessation of eruptive activity . Each " peak " is different and characterized by its violence, its duration,  the point(s) of origin of the activity.

The year 2013 has been marked so far by 20 paroxysmal episodes at the southeast crater of Etna. Browsing this episodes, no in details ... what has been done in the course of the year, you can remove certain features or characteristics.

- 1. February 19 :
You can see a pyroclastic flow during the climax phase of activity - 4. February 21
- 5. February 23 : the latter event is marked by the smaller volume of lava emitted , but also abundant and localized pyroclastic materials falls. Near Linguaglossa, 15 km from the crater, there is slag of more than 20 cm. Etna - the new mouth in the saddle between the two south-east cones- Photo by Boris Behncke in early March . Etna - lava flows of the last peak in February -  Photo by Boris Behncke, in early March

A beautiful series of 6 episodes for the month of February ! - 8. March 16: a lot of scoria on Zafferana Etnea, Santa Venerina and Acireale . Apart a small strombolian activity on 3 and 6 September, was an interruption of the paroxysmal activity for about six months. 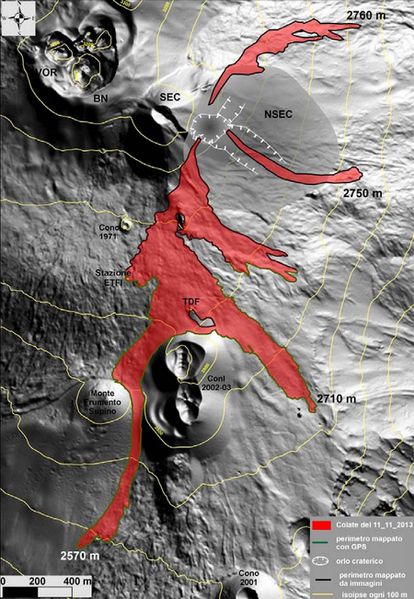 - 17. November 23 : Strombolian activity is rapidly moving towards the stage of fountaining - 20. December 14 to 17 : the peak is characterized by a long total of 23 hours between the first explosion and the end of emission of ash, and a tremor that is slow to return to its original level ... the comments are waiting from the observatory.

Etna -  characterizing curve of the tremor of the last peak - doc . INGV