In the Canary Islands, Tenerife is known especially for its flagship volcano, the Teide, located in the wide Las Cañadas caldera.
The south of the island, less raced, has yet one of the best examples of explosive phreatomagmatic volcanism : the Caldera del Rey. Caldera del Rey is a maar, diatreme type, formed by an explosive eruption that perforated the most southerly flows ot the ancient series of Roque del Conde . The morphology of the caldera is in the form of two overlapping ovals, suggest a formation due to a double eruptive episode leading to two nested calderas .

The initial semi- caldera is located at the southern end . Trachytic and / or phonolitic tuffs are mixed with the banking basalt .

The second maar has a diameter of 1200 m . Material expelled during its creation is based on those of the first maar formed, resulting in a visual discrepancy. After the cessation of volcanic activity, the set has been subject to erosion, which formed a series of ravines, known under the name of Barranco del Rey. - Photo Google Earth
The bottom of the caldera was clogged with soil formed "in situ" by the disintegration of pumice deposits . Since the 1500s, the caldera became a farmer's field, a domain belonging to Alfonso Dominguez family, from Arona. From basal cultures, such as  potato and wheat, we quickly moved to more cash crops for export, such as cotton, tobacco or cochineal ( which is extracted to dye textile and cosmetic use). Today plantations of bananas and tomatoes,  under glasshouses, are side by side with those of oranges, lemons, mangoes and avocados, and occupy half the surface of the Monumento Natural de Caldera del Rey. 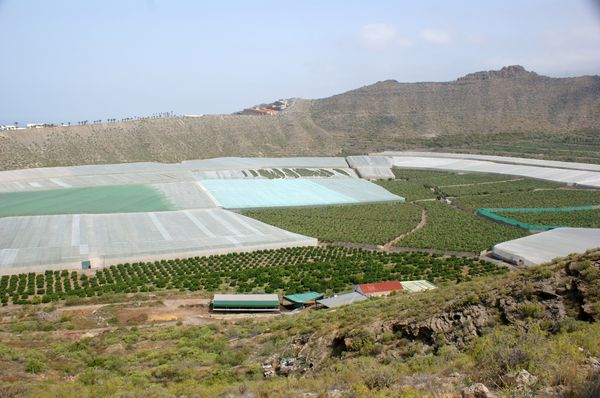