Back on Pantelleria, the black pearl of the Mediterranean sea.

A discussion with a cellarman, a recent TV show, the re- reading of interesting articles (*) , so many circumstances that lead me to speak of  "the black pearl of the Mediterranean" , nickname given to Pantelleria, because his dark volcanic rocks that are ubiquitous. A study published in the Journal of Petrology , "Melting , Differentiation and Degassing at the Pantelleria Volcano , Italy , by D.Neave et al " offers us an analysis of the evolution of magma from its initial melting in the mantle until its eruption, based on a study of volcanic glass and inclusions trapped in crystals of pantellerites from different eruptions marking the last eruptive cycle of Pantelleria.


Back to Pantelleria and its particular lavas :

Pantelleria, with the islands of Lampedusa, Linosa and Lampione , form the Italian Pelagie archipelago, a group of volcanic islands that owes its existence to the presence of a continental rift in the center of the channel of Sicily. Location of Pantelleria and other volcanoes of the Sicily Channel rift . The current extension WNW -ESE between Sicily and Africa , and subduction zones relative to the movement to Europe of the African plate are represented by arrows on the one hand and the crenellated line - . Doc. Neave / ref in sources.

Pantelleria and Linosa are dormant volcanoes , which are born at the bottom of discontinuous rifts, long, narrow and deep (1700m ), which are present in the center of the Sicily Channel, also wide (250 km), flat and slightly deep (100 - 200m).

Despite the subduction of the African plate under the Eurasian plate, the region of Pantelleria is in extension ; a slow clockwise rotation of Sicily stretches this portion of the channel of Sicily, with a consecutive magma ascent  ... the last event is the eruption of Ferdinandea (or Graham Island for anglophile ) in 1911.
The bottom of the Sicily Channel rises on the shoulders of the rift valley and emerges to form the flat islands of Lampedusa and Malta. The floor of the rift is a thin crust whose thickness reaches twenty kilometers , while the thickness of the crust is about forty kilometers in Sicily and Tunisia . The structure of Pantelleria is determined by oriented faults,  following the direction of the faults bordering the ditches ( NNW -SSE ) .

The island of Pantelleria is the tip of a volcano of 40x30 km and 2150 meters of height. The island covers 83 km², and is about 13 km long and 8 km wide at most. The volcanic edifice have emerged 500,000 years ago , and has continued to grow intermittently until the present time . 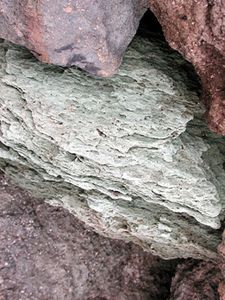 The magma analyzed in this study is known as pantellerite, a magma rich in sodium and potassium, but poor in aluminum. This type of magma is rare , so little studied , and found only a few volcanic rift areas , such as Fantale in Ethiopia.

The pantellerites are peralkaline rhyolites, strongly sodic . They are either glassy, or contain feldspar anorthoclase , aegirine ( green pyroxene ) , aenigmatite or cossyrite, red to brown, in a paste made of small crystals of the same mineral , mixed with quartz, tapatite and zircon .

In practice , without going into the details, remember that this study?

- The research made on Pantelleria includes a study of mantle melting and the differentiation of the magma, which allowed the reconstitution of the magma chamber of the volcano.

Key features: (1) magma storage region, with dimensions comparable with the nested calderas, located at 5·5 km depth under the SE of the island; (2) high degrees of stratification within the magma storage region with low-density pantellerite and trachyte magmas overlying mafic rocks; (3) rapid crystal settling and volatile ascent in the magma chamber as a result of low viscosity, which play crucial roles in magmatic differentiation and volatile transport respectively; (4) interface between hawaiite and trachyte melts, at which mixing can occur prior to eruption (e.g. Ferla & Meli, 2006); (5) absence of a large magma storage region in the NW of the island where mafic compositions are erupted from c. 7·5 km depth; (6) ultimate derivation of mafic and silicic suites of magmas from the same source.


- That on the degassing of volatiles confirmed the dangerousness of the pantelleretic magma, and the issuer volcano . Key features: (1) the nested Cinque Denti and La Vecchia calderas; (2) the central trachytic complex centred on Montagne Grande; (3) numerous small pantellerite vents, which are mainly located within the Cinque Denti caldera; (4) the restriction of mafic volcanism to the NW part of the island.

- The calculation of the amounts of sulfur released into the atmosphere by Plinian eruptions of the Green tuff -type, dating from 45,000 years on Pantelleria (several km ³ of ignimbrite green were issued in conjunction with the collapse and formation of the Monastero caldera, or Cinque Denti caldera - see training and development of Pantelleria ) allows to imagine the impact of such pantelleritic eruptions on global climate ... 80 to 160 million tons of sulfur may have been involved, compared with the Pinatubo eruption, which released nine tons of sulfur, for a fall of 0.4 to 0.5 ° C in the global temperature .
Sample of Green tuff - photo Tuff Guy / Gareth Fabbro .

(*) The discussion with the cellarman was on the Sangue d'Oro , a passito di Pantellegria, produced by the actress Carole Bouquet , became winemaker. The TV show of October on France 5 and is entitled " Give me a place" in which Carole Bouquet receives Alessandra Sublet , and made us discover the interior of the island of Pantelleria. - Science 2.0 - Tuff Guy - Pantelleria, a volcano with a trapdoor - by Gareth Fabbro - link