The alert level of the Raung volcano, located in East Java, SW of Ijen massif , has just been raised a notch (level 2 / Waspada ) on January 5, 2014 , following an increase of seismicity and a brownish gas fumes . A ban 2 km. around the crater is now in force . 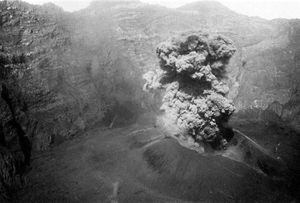 Peaking at 3332 meters , this building has the typical form of a stratovolcano, with the exception of NO flank, attached to the Suket close volcano . Its summit is truncated by a caldera 2,000 meters in diameter, with steep walls . A prehistoric collapse of Gunung Gadung on its western flank caused a massive debris avalanche that traveled 79 km , almost reaching the Indian Ocean.

Images SRTM DEM and ASTER TIR of Ijen volcano complex - doc ULB be.
On the left image , the Raung is left - on the right image , two thermal anomalies are visible, at the Kawah Ijen and Raung. Cross section of the caldera Raung compared to the estimated height of G. Gadung before its collapse

- ULB - The use of multispectral satellite data to retrieve temperatures from volcanic lakes - Prof.A.Bernard - link