The ambient seismic noise , a new tool for predicting eruptions.

The Piton de la Fournaise / La Réunion is more than ever occupy a privileged place in the world of volcanology ... recognized as a volcano-laboratory, it will be equipped in 2014 with 300-400 seismic sensors , against twenty previously, for data collection never carried out on an active volcano. This means debauchery is made ​​possible through the sponsorship of American industrial involved in oil exploration. 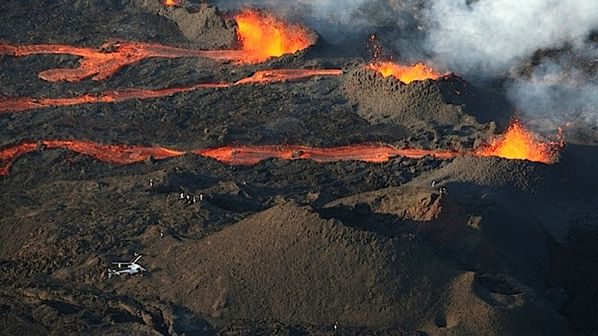 A team from the Grenoble Institute of Earth Sciences / CNRS has demonstrated the possibility of using ambient seismic noise analysis for the forecast of volcanic eruptions.

In 2009, during the Undervolc project , scientists have deployed a network of new seismic sensors on the Piton de la Fournaise . These new instruments should allow a better understanding of the deep structure of the volcano, to improve understanding of eruptive mechanisms and forecasting periods of eruptions ... They just opened the door to new discoveries : the seismologists have sought to exploit the small vibrations recorded continuously ,  the ambient seismic noise ... caused by weather events or human activities.

These tiny vibrations propagate through the volcanic edifice and carry with them the features inside the volcano , thus information about its activity.

The both eruptions of October and December 2010 were analyzed and  a posteriori map of the mechanical changes before eruptions obtained . These changes include changes in wave velocities and structural changes - fracturing and/or magma injection - affecting the diffraction properties . These are direct indicators of the pre-eruptive volcano operation , and the position of the eruptions.

Eruptions of Piton de la Fournaise, Reunion Island , observed in October and December 2010 and located by the large and small black star (respectively). Colors ranging from yellow to red mark where the volcano undergoes a change in structure ( crack opening , ground displacement , removal or solidification of magma ... ) From left to right . :
( a) Approximately 3 weeks before the eruption , changes in the main crater are observed.
( b) Approximately one week before the eruption , the changes are localized to the site of the future eruption. It is perhaps in preparation of crack through which the magma will be injected to reach the surface.
( C ) During the first eruption (October), the observed changes correspond to the effusion of magma to the surface. It is also possible to observe northwest herald a change in the second eruption (smaller) .
(d ) During the second eruption (December) , the most significant changes occur around the second effusion of magma. It is also possible to observe changes associated with slow solidification of magma flows of the first eruption .
Doc. CNRS / The analysis of seismic noise could be used for the location of future volcanic eruptions. 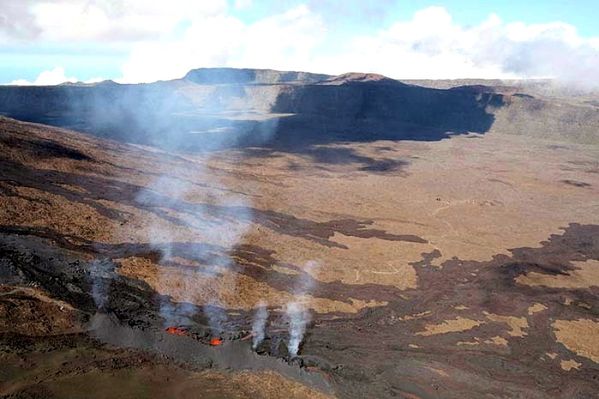 The availability of this information one to two weeks before an eruption offers interesting forward perspectives. This work will be applied to other volcanoes, Colima in Mexico, or Merapi on Java to be definitively validated.

This study will find more applications in the areas of oil exploration , geothermal , changing materials (detection of cracks in concrete structures ) or monitoring of landslides.

- Journal of geophysical research - Imaging preeruptive and coeruptive structural and mechanical changes of a volcano with ambient seismic noise A; Obermann & al. 12.2013- link