The east end of the east rift zone of Big Island was the scene of a famous eruptive flank sequence in 1960, which transformed a rural paradise in a nightmarish landscape.

After the summit eruption of Kilauea Iki Crater in late 1959 , the seismicity increased on 13 January 1960 along the Kapoho fault. This fault borders the Kapoho graben to the south-east, while the fault Koa'e limit the north-west side ( Map 1 ) .

In the afternoon of 13 January, the graben has fallen by more than a meter, fault Kapoho side , and by one meter twenty Koa'e fault side . Population to evacuate spontaneously ... and on 7:35 p.m., the sky turned red heralds the beginning of the eruption.

A long segmented fissure, 900 meters, lets out lava fountains during half an hour, forming a curtain of fire from a height up to 100 meters . Then, during several hours , the activity decreases to the either side of the crack to increase in its central part . Lava a'a flows spread to the NE, accompanied by explosions of methane and blue flames . To 23:15, steam explosions mark the vent H , following the likely meeting between water (brackish or seawater) and lava .

Earlier January 14, steam explosions cease, and fountaining is confined to a section of 200 m. between B and E vents. The fallouts building a rampart spatter/slag of ten meters height, open NE side, from where an a'a stream flows down the graben over 1500 m.

January 15 , the a'a lava flow reached 6m. thick and 300 m. wide where it crosses the road Koa'e - Pohoiki . It reaches the sea on 8h, by generating a vapor curtain in advancing . Casting pours southward towards Higashi Pond, formed during a collapse after the seismic crisis of 1924. The lava will continue to invade until it is completely filled on January 20 . Hawaii - the Kapoho eruption 01/15/1960 - fountaining and cone vent B, with a cast a'a flowing to the right of the cone - Kapoho few houses are visible on the left, in the foreground - photo JP Eaton / USGS - HVO

Meanwhile, on January 18 , lava fountains of vent B reach a height of 365-425 m., expelling incandescent pumice  to 900 m. height. The fountains flow feeds a'a lava flows that move away from the cinder cone , and eventually overflow the wall of the graben toward Kapoho .

Three brave attempts were made to stop the flows threatening Kapoho  and subdivisions, from January 19 ( map above ) . In vain , since January 28, the cast reaches the third barrier and thickens to the dam to reach a height of 15 meters. Pressure injected lava in the cinder cone, Pu ` u ` i Kuki, uncompacted, ... dislocated this one and plunges beneath the dam to come out to the south, and bury the village's school . The barrier resist  until February 5, when it is completely covered by lava that encircles the Pu'u Kukae .

Another barrier, 1.6 km long, is built on January 21 between Pu`u Kukae and the ocean, to prevent the penetration of the lava to Kapoho Beach Lots and coastguard facilities in Cape Kumukahi . It will contain a time the flows, but yields in four places on 28 in the afternoon, before being covered 29 . 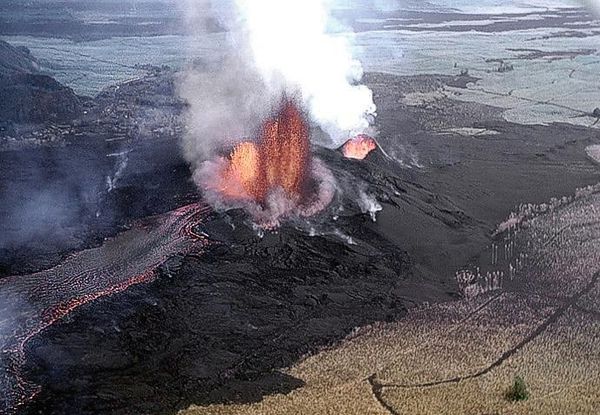 The fate of Kapoho is sealed on 27.01 : a very fluid lava comes out of the vents B , L and K , fueling a'a flows between Pu`u`Kuki'i and Kapoho . This new source condemns the city ... at 23:30 , the lava flows reached the city , and in 30 minutes,  a'a flows moves to SO in the streets, covering house after house . On 27 midnight, most of Kapoho is destroyed . On the night of January 30 to 31 , the measured temperature of lava fountains increased significantly in relation to a change in mineralogy (the content of lava in olivine , low to absent, changes and olivine becomes the dominant phenocryst) ... later we will discover that a quantity of hotter magma from the summit area of ​​Kilauea is mixed with cooler magma stored in a reserve under the Kapoho area, since 1955 or before .

To follow: the implications of the Kapoho eruption at the summit of Kilauea.