On the evening of January 23, 2014 , the Strombolian activity continued in the new southeast crater of Etna, as well as the outpouring of lava at the start of a mouth at the eastern base of the cone of NSEC . The magnitude of the tremor is slowly rising. Both types of activity have continued during the night , although the degradation of vision from the web-cameras no longer allows an optimal monitoring from midnight. 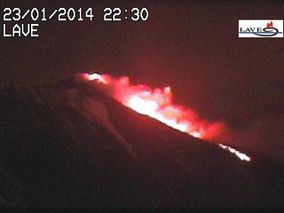 January 24 morning , status quo for the activity, but the lava, at departure of eruptive vents opened on January 23, respectively at 13:05 local and 20:15 ( Etna Walk) ,  join ; and the front of the flow reaches the coast 1850 m on the west wall of the Valle del Bove, a few hundred meters east of the mountains Centenari . 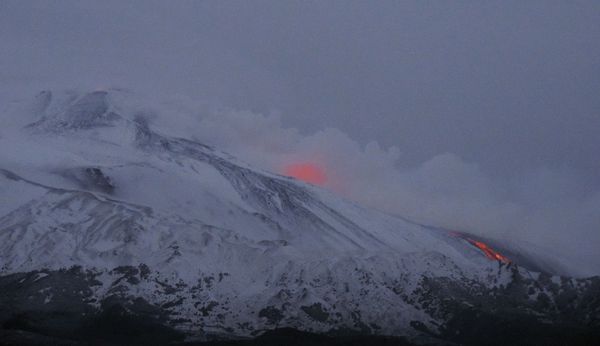 Etna NSEC - from left to right , the cone of NSEC -  center, the point of emission of lava - right , flow in the Valle del Bove  - Photo Boris Behncke .

During the day, the Strombolian activity NSEC form gas rings .