In the series " Volcano observatories and volcanoes associated"  whe opened a few months ago , add one of Costa Rica: the OVSICORI - UNA . The Observatorio Vulcanológico y Sismológico Costa Rica - Universidad Nacional exist under this name since 1986. He is in charge , in addition to seismic and tectonic research, of the surveillance , among the 116 volcanoes in Costa Rica, of six active volcanoes ( Arenal, Irazu , Miravalles , Poas , Rincon de La Vieja , Turrialba ) and 2 sleeping ( Barva , Orosi ) , divided into three mountain ranges : the Guanacaste , the Tilaran and central Cordillera .

All of andesitic type, they owe their formation to the subduction of the Cocos tectonic plate under the Caribbean plate , forming volcanoes of continental margin. The buildings of the Observatory are located in Heredia, about ten kilometers from the capital San Jose. During a visit in 2008, I had the opportunity to visit the facilities along with Rodolfo van der Laat , engineer and surveyor volcanologist in OVSICORI . The front of the Observatory Heredia - photo Bernard Duyck Rodolfo van der Laat when visiting the OVSICORI, in behind the scenes - photo Bernard Duyck 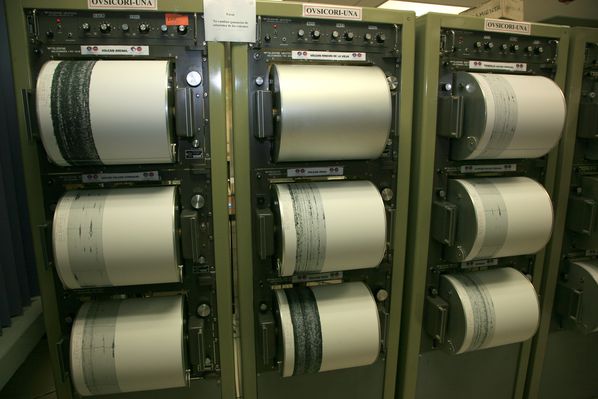 OVSICORI - Side facing the battery of Sismos , the two darkest plots are for Arenal, top left and Poas , bottom center - photo Bernard Duyck With Tanguy de Saint Cyr at the Arenal Observatory , the volcano was invisible that day in the remnants of a tropical storm - photo Bernard Duyck

Volcanoes have been analyzed and processed separately , I will briefly mention that their current status. ( Annual Report OVSICORI )

The Arenal : Its last eruption dating back to the 14th century , popular memory had forgotten his danger before his rude awakening in 1968 , which killed 90 people. Regularly active since then, he calmed down in December 2010. He present since more than three years a low seismic activity and fumes mainly of water vapor at craters C and D. Levels of SO2 in the gases are at the limit of detection level of sensors and the fumaroles temperatures measured by infrared thermography exceeds 180° C. Irazu Volcano : the volcano- tectonic seismicity remained at a low level compared to previous years. The main crater remained mostly dry throughout the year , not allowing the installation of a new lake. For Poas , the seismicity remained at a stable level. Phreatic eruptions at the laguna Caliente were recorded between 4 and 9 months eruptions . The lake level has varied in amplitude zone of 2.5 meters during the year, the average annual temperature of acid lake is 45-50 ° C and a pH of 0-0.3 . At the superficial level, gas concentration seems stable,   fumaroles temperatures fluctuating between 100 and 600 ° C, with a maximum between April and July. In 2013, the active convection cells marked the warm and acid Rincon de La Vieja's lake . Fumaroles were measured at a temperature reaching 130° C on the west wall of the active crater .

The physico-chemical characteristics of the lake acid are similar to those observed in 2000 and suggest that during the past decade, a substantial amount of magmatic gas was injected into it. In Turrialba , the year began with a similar seismicity to the previous year. From March to April, the volcano- tectonic earthquakes were recorded at a depth greater than 5 km. below the summit of the volcano, and the first type tornillo earthquakes .

On May 21 , a sudden decompression accompanied by ejection of tephra through the 2010 and 2012 vents was accompanied by seismic activity and indices typical CO2/SO2 . On July 13, the number of earthquakes increased to 500 per day and remained at these values ​​until the end of August , before declining . During this period , temperatures measured at the mouth in 2012 ranged between 600 and 800° C. In November , seismicity leaves suggest a change in the composition of fluids. Since decompression in May SO2 flow was maintained at a low value , of the order of 500 to 1000 tonnes / day.