Jehol Biota ecosystem includes the Yixian and Jiufotang formations and their numerous fossils, located in Liaoning Province in northeast China . 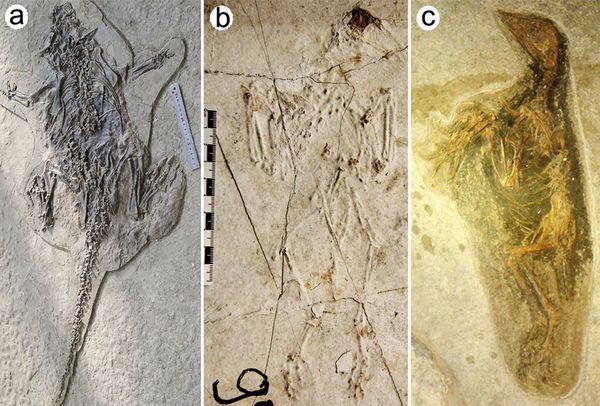 Fossils of vertebrates in the "boxer -like" position, typical of victims of pyroclastic flows - photo Baoyu Jiang / Nanjing university
a: Psittacosaurus - b , c: Confuciusornis ( a primitive bird the size of a crow )

This ecosystem was dominated in Cretaceous ( 130-120 Ma) by marshes and many lakes. The climate was temperate and with seasonal rains.

The Yixian and Jiufotang formations form a sequence of weakly stratified siliciclastic sediments , mainly sandstones and shales deposited in lake areas . There are no traces of continental deposits , such as wind-blown sand or paleosol . These sediments have preserved many fossils (feathered dinosaurs, primitive birds, pterosaur, ...) , some of them having even soft tissues.

Jehol beds were deposited on the Eurasian continent , an extended continental zone, completely emerging from the ocean in the early Cretaceous and composed of numerous tectonic blocks. a, Modern-day map showing different geographical extents of the Jehol Biota through time. I, Yixian Formation and its lateral equivalents (Late Hauterivian/Barremian); II, Jiufotang Formation and its lateral equivalents (Early Aptian); modified from ref. 4. The filled square marks the position of the major vertebrate-bearing sites in Liaoning Province. Insect faunas from penecontemporaneous units in Kazakhstan are remarkably similar to those from the Jehol Biota, and may indicate a westward extension of these ranges. b, Palaeogeographic map of eastern Asia in the Lower Cretaceous, showing major regional tectonic features. The arrow indicates the approximate position of outcrop of the Yixian and Jiufotang Formations in northeastern China. This region would have occupied a palaeolatitude of approximately 40–45° N during the late Mesozoic era. Right, reconstitution of Psittacosaurus meileyingensis a species Psittacosaure Cretaceous in China (see photo above - a/)


Volcanic beds of the Jehol group resulting from igneous activity around the Pacific, contemporary of these sedimentary deposits and considered maximum for the Yixian Formation ( 130-123 Ma) , and declining to Jiufotang formation ( 123-120 Ma)

Each skeleton was directly integrated into pyroclastic flows accompanying the explosive eruptions . They were found dead in a position - position  "boxer-like", resulting from post- mortem shortening of tendons and muscles - and show signs of carbonization, reminiscent those marking the victims of Pompeii . These pyroclastic flows are responsible at the same time of the mass mortality, burial, the relative movement of bodies in the lake environment - fossils of aquatic organisms alongside those of terrestrial organisms - and ultimately the shelf of the components of the ecosystem Jehol, which might be called the "Chinese animal Pompeii " .