The Kelud ... or the tribulations of a crater lake .

The Kelud stratovolcano located on the island of Java , has seen its alert level move from level II / Waspada ( alert ) at III / Siaga (standby) , on 10 February .

Waiting for a change in this status, I have not commented until now the news.

After an effusive eruption on 3-4 November 2007, producing a lava dome in the crater lake, still active in December of the same year , the level of Kelud was reduced to I / Normal in June 2009, while keeping recommendations to keep away from the dome , due to its instability , its potentially high temperature and toxic gas emanating .

Seismicity of Kelud was increasing since January 2014 with a number of volcanic shallow earthquakes - between 2 and 8 km. under the volcano - and peaks of seismicity on 15-16 January , 28 January and 2 February. The temperature of the crater lake had also increased by 5.5°C since September 2013. Following that, the PVMBG had passed the alert level II ( on a scale of IV) on February 2 .

Since the elevation of the seismicity , the presence of inflation , in particular in its radial component , and the increase in water temperature of 4°C between 23 January and February 9 , followed by a relative decline on 10.02 , brought the PVMBG to suspect a magmatic intrusion and change the alert level. 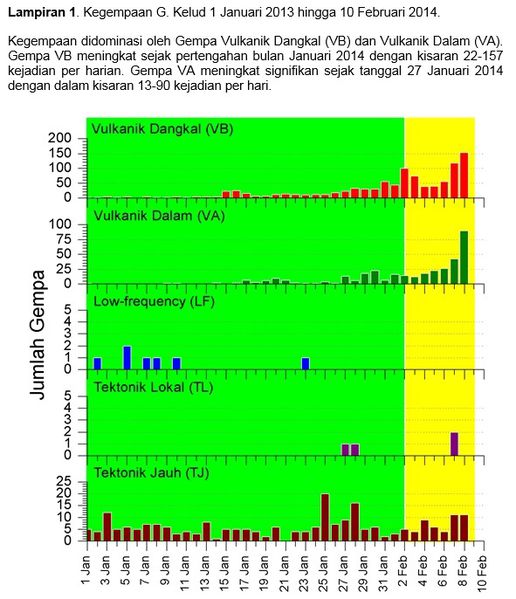 The evolution of the seismicity between January 1 and February 10 - a decision support - doc . VSI Kelud or the tribulations of a crater lake :

The Kelud occupies a special place among Indonesian volcanoes. Despite a degree of confidentiality , 30 eruptions have been recorded since 1000 .

Eruptions from Kelud and their VEI from year 1000 - doc . GVP

The danger presented by this volcano is related to the presence of a large crater lake with a volume of up to 40 million cubic meters, which is expelled during eruptive initial stages, often Plinian type . Solfatara in the crater of Kelud in April 1919 - doc . Tropenmuseum

The VSI dug tunnels in the walls of Kelud to drain the lake and maintain its volume to about 2 million m³. The lake level has dropped by fifty meters after this action, but in 1951, a new eruption deepened the crater of 70 meters , leaving a volume of 50 million cubic meters of water after repair of damaged tunnels . After the loss of over 200 lives following the eruption of 1966, a new tunnel was built , and the lake volume reduced to only one million cubic meters. The eruption of 2007 changed the situation : the lava dome that is installed in the lake did disappear almost all , minimizing the risk of interaction between the magma , lava and water.
A detailed analysis of Lake Kelud is available on the website of Professor Bernard / Université Libre de Bruxelles - link Kelud - the lava dome has invaded the entire space of the former crater lake and is still smoking on 26.11.2010 ( we see one remaining bottom left) - photo Antony Van Eeten .