Pre-hominids tools dated to 3.3 Ma found near Lake Turkana in the African Rift.

Chipped stone artifacts discovered in north-western Kenya, in the region of Lake Turkana suggests that human ancestors sewed tools there are 3.3 million years, about 700,000 years ago that 'no one had established. Researchers have uncovered more than a hundred splinters, "hearts" (or initial blocks) and "anvils" that could be the signing of a very archaic workshop size of prehistoric tools.

These tools were described this week by Sonia Harmand and his team during a meeting of the Paleoanthropology Society in San Francisco.

Satellite view of Lake Turkana, the "Jade Sea" in the Kenyan Rift

After first excavations in 2011, a new excavation of the site was conducted in 2012 with a National Geographic financing.

The ecosystem of Turkana lake, dubbed the "Jade Sea", inherited from prehistory is special: the lake is fed to the north by the Ethiopian rivers; ventless and located in a desert region where the temperature sometimes reaches 50 ° C, the lake is concentrated in salt. In this unique environment, there are Nile perch, hippos, and the largest crocodile population in the world. This lake was a favorable living environment for ancestral tribes.

South of Lake Turkana, the "Naboiyaton", a stomach of the elephant as it is called indigenous, is a low volcanic cone born there are tens of thousands of years of the meeting between the magma, making its way to the surface through the fractures of the rift, and the waters of the lake. Small volcanoes arose afterwards on earth and the lava flows came to stop against the back of Naboiyaton. 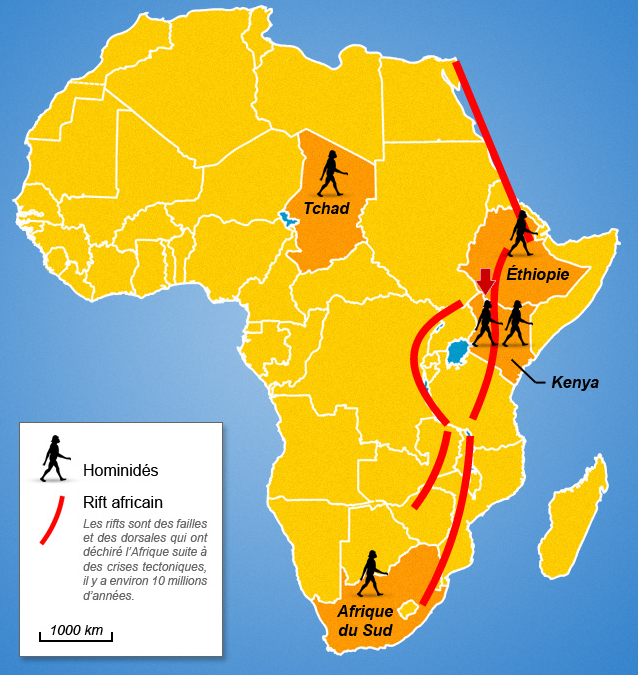 Hominid discovered in the African rift is and Chad - doc.http: //linearpopulationmodel.blogspot.be/

But back millions of years back : The first discoveries in the area date back to 1972, when Richard Leakey found a skull to Koobi Fora on the eastern shore of the lake, whose age was estimated at about 2 Ma and was defined as Homo rudolfensis, from another name of Turkana, Lake Rudolf.

In 1998, the team of Maeve Leakey discovered the skull to define a new genus and a new species, nearly Lomekwi: the Kenyanthropus platyops, the flat-faced man of Kenya. Cranial remains of Kenyanthropus and reconstitution of the bust - -doc. Hominids

To how Technology of the Stone Age attribute this discovery?

The paleomagnetic dating of sediment where the artifacts were found gave them 3.3 Ma ... is 700,000 years older than those discovered at Gona, in the Afar triangle in Ethiopia (dated at 2.6 Ma ago), and connected to the technology called Oldowan (2.6 to 1.7 Ma).

Sonia Harmand proposed to the meeting of the Paleoanthropology Society for a new term, given that the tools found predated the existence of the genus Homo, probably made by one of the members of the genus Kenyanthropus or Australopithecus (Lucy). The proposed term is a technology called Lomekwian, distinct and older than the Oldowan technology.

Out technical data that may seem off-putting, this discovery ahead of hundreds of thousands of years making tools by the pre-hominids, some tests before this activity becomes a strong tradition ... and in the tectonic and volcanic environment of the Great Rift Valley is African.