Back to the south of the Nippon archipelago and the islands Tokara, starting with the island of Kuchinoerabu-jima, which is illustrated on August 3 with a brief and violent eruption.

The site of the eruption was the Shin-dake crater. The eruption lasted about ten minutes, characterized by rising of an ash plume to 1,500 meters and a pyroclastic flow on the western flank of the volcano, characterized by hot gases and steam that burned vegetation ...  index of a likely phreatic nature eruption . The volcanic seismicity and tremor began to drop on August 5, leaving a small steam plume above the crater rim. (JMA) 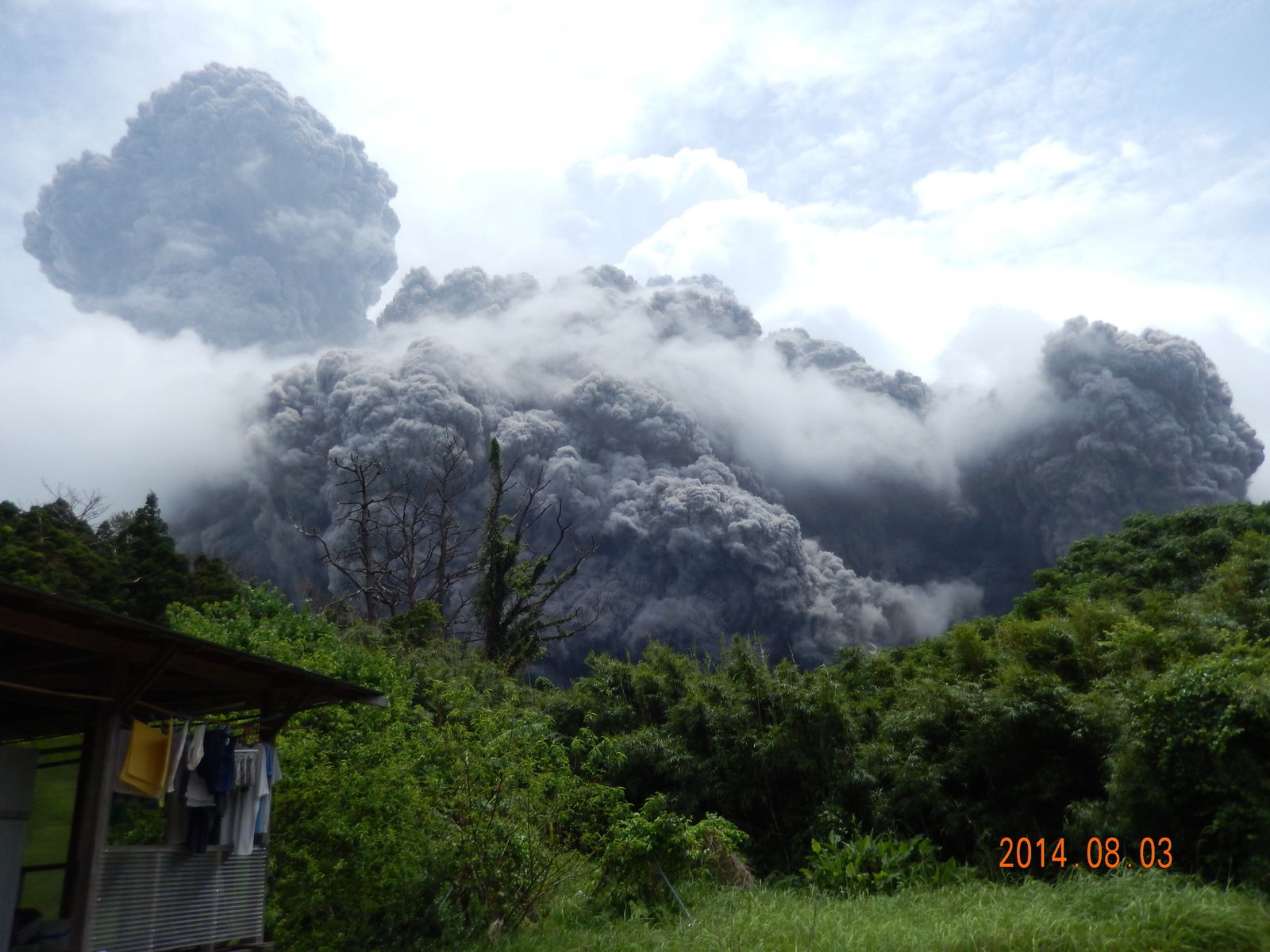 Eruption of Kuchinoerabu-jima on 03/08/2014 - the pyroclastic cloud is surmounted, on the left, by the eruption plume - photo Kuchi-erabu.org Kuchinoerabu-jima - Above,the trace of the pyroclastic flow is visible on the left, between the top and the sea - It cuts a circular route - on the plate bottom, a vegetation area burned - photos Japan Coast Guard 06.08.2014 The eruption opened a crack on the top of the Shin-dake, observed on August 6 during an aerial survey by Japanese volcanologists. 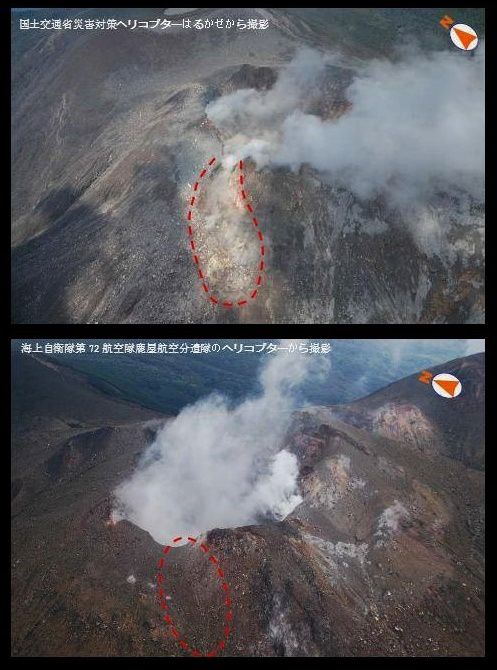 The island of Kuchinoerabu consists of different age spread buildings.

Although the beginning of the eruption is unknown, the first building is the Gokyo volcano that emerged 580,000 years ago. The volcano Jogahana, a contemporary of Gokyo is exposed on the north coast of the island., while Ban'yagamine, dated about 200,000 years, shaped the northwest. Then the more recent volcanoes formed the east-central part of Kuchinoerabu: they call Takadomori (100,000 years), Kashimine, Noike, Hachikubo, Furudake and Shindake. Two large pyroclastic eruptions are involved in the formation of volcanoes and Noike Furudake between 15,000 and 11,000 years ago.

The latter three are responsible for the volcanic activity during the Holocene; Shindake focuses on the historical activity. 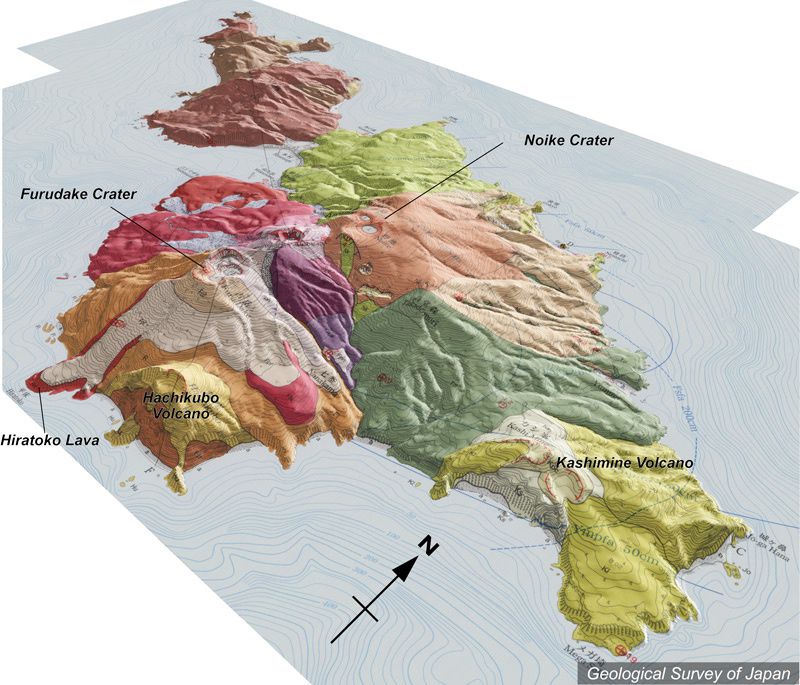 Kuchinoerabu-jima - the most recent craters and lava flows - doc.Geological Survey of Japan

The Shindake began to build in the escarpment of the partial collapse of Furudake, dating back thousands of years. The volcano consists of lava erupting during the 9 and 11 centuries, and a summit pyroclastic cone of explosion breccias,  products of a vulcanian and a phreatic to phreatomagmatic activity at the summit crater.

The central crater is surrounded by some satellite craters, some of which were opened during the eruption of 1930. In 1931 and 1933 to 1934, violent eruptions were accompanied by lahars spread along the river Mukaehama. A crack 500 m long, oriented NS, opened on the east slopes of Shindake, and was the seat of the eruptions of 1945 and 1980.

Evolution of volcanoes Furudake and Shindake between 13,000 years BP and today - doc.Geological Survey of Japan / AIST 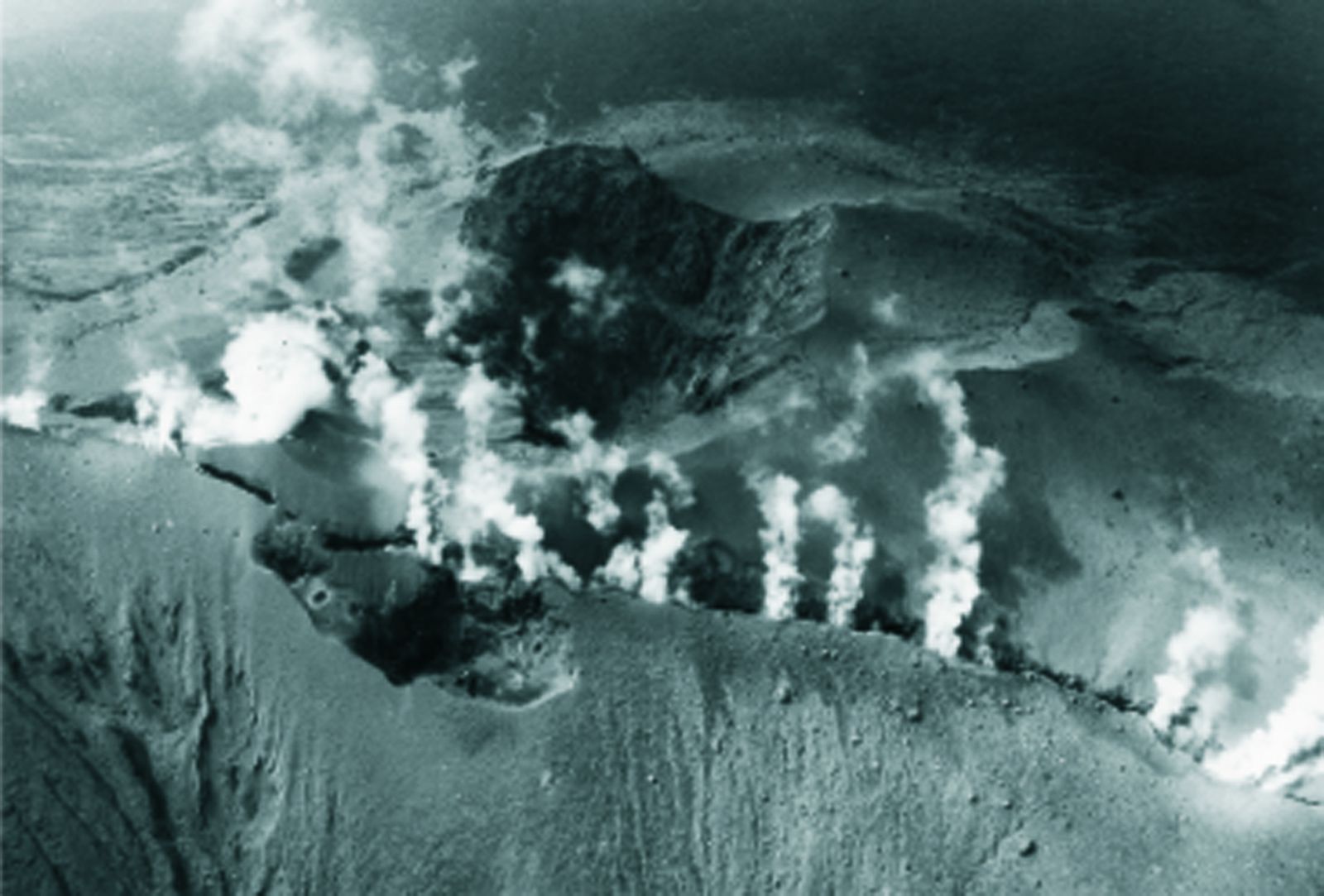 In September 1980, a short and very powerful explosion produced a small plume and ash falls, mainly over the sea; it was followed by emissions of white vapor during a few days.

Since 1980, an increase in seismic and thermal activity around the summit crater was reinforced by the rise of hydrothermal fluids from a reservoir located 500 meters below the summit.

Seismic swarms and inflation were observed in January 2005; the inflationary source is located several hundred meters below the crater. The fumarolic activity has been increasing since.