The Inner Hebrides , an archipelago located in the west of Scotland, home to the islands of Mull and Staffa , famous for its volcanic organs and Fingal 's cave .

Fingal 's cave is located at the southern tip of the island. High twenty meters and long of 75 m. , it is carved into a basalt cliff.

The French volcanologist Faujas Barthelemy Saint -Fond studied organs of Staffa in the 18th century and concluded that these regular columns were formed by lava. 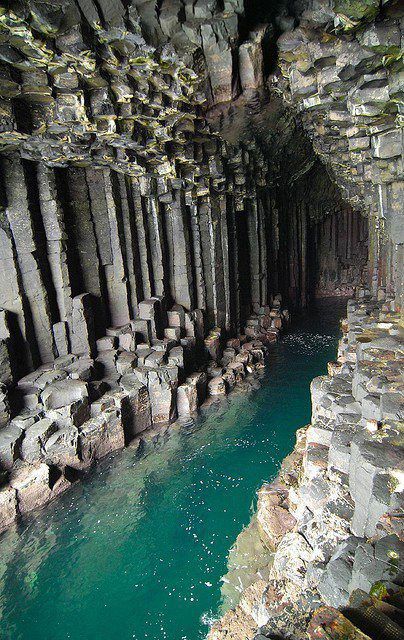 Inside Fingal 's cave , with a fisheye - photo The Monde.fr

His name in Gaelic An Uamh Bhin means " melodious cave " ... the sound of the waves in the cave has not interested only the geologists , he inspired a work of Felix Mendelssohn: Die Hebriden / opening opus 26 , also called Die Fingalshöhle .

He says " arrived in Scotland with a penchant for folk songs , an ear for the beautiful and fragrant countryside and a heart for the bare legs of the natives" .

The island of Staffa is entirely volcanic : on a base of tuff , tholeiitic basalts with dark olivine are topped by a layer of basaltic lava without crystalline structure. The intermediate layer has predominantly hexagonal columns , which form the walls of caves excavated . These basalts are dated to 55-58 million years ago. A pyramidal islet , only visible at low tide, called Am Buachaille - the shepherd - is formed from a pile of basaltic columns sheaves. Mull island, who formed the prehistory one set with the current islands of Iona and Treshnish , was formed there 50-60 Ma under the action of fissure eruptions during the formation of the North Atlantic and division of the supercontinent of North America-Europe

The stepped plateaus of  Mull were subsequently treated by the central igneous complex , and earthquakes , before being eroded by glaciers that retreated 10,000 years , leaving deep U-shaped valleys , and a paradise for geologists .

- Scotland, the home of geology - link