The northeast shore of Lake Kuril is dominated by the conical silhouette of the Ilyinsky volcano, nestled in a small depression.

A first volcano was formed to 5,700 BC, on the edge of the NE rim of Lake Kuril caldera.

The modern building was built in a large caldera of 4 km., produced by the collapse of the proto- volcano. Pyroclastic deposits of Ilyinsky overcome the ignimbrite emitted during the eruption of Lake Kuril , showing by their composition that the beginning of the eruption of Ilyinsky follow that which caused the collapse of the caldera Kuril , and a genetic correlation .

After a rest of 1700 years , a major explosive eruption of  VEI 5 took place in 2850 BC. Other eruptions are reported in 2050 BC and 50 AD , producing thick andesitic lava flows , and before a new long rest. The Kuril lake and the Ilyinsky volcano - photo A.Litsis / photokamchatka In 1901, a phreatic eruption formed a maar crater on the eastern flank of the volcano. It is wide of 800 to 1,000 meters , 200 meters deep and breached by a canyon northeast side. 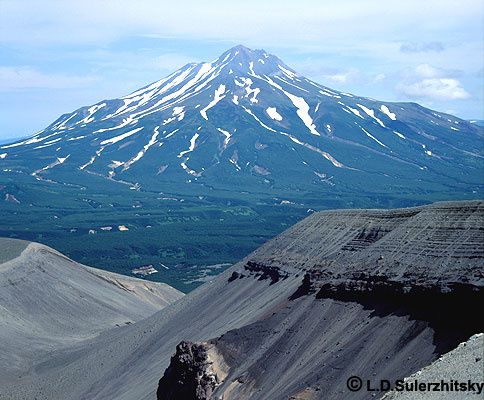 In the foreground, the inner wall of the flank maar of Ilyinski (1901) and Zheltovsky volcano in the background - photo Sulerzhitsky LD / KSCNET

In contrast to the Ilyinsky, the Zheltovsky is a composite building : a large volcanic pedestal is topped by a caldera dated to late Pleistocene . The latter contains a stratovolcano, dated to the late Pleistocene , wearing several extrusive domes formed during the Holocene . The extrusion of domes is related to debris on the slopes of the volcano.

In addition, various explosive eruptions occurred : one , there is 3-4000 years , emitting basalto - andesitic ash ; another around the year 1500 , producing andesitic blocks and ash ; the last in the 19th. century , with fallout of rounded basaltic lapilli rich in inclusions of allivalite and eucrite . Recent eruptions have caused significant lahars , which have reached the Pacific coast.